Yesterday, while looking for an article on The West Australian newspaper’s website, I put the word “eBay” in their search box, and discovered this story:

“Illinois shaped corn flake sells for $US1350 on eBay”

The text and picture from the article appear below, in case the article is removed from The West’s website:

Illinois-shaped corn flake sells for $US1350

Two sisters sold their Illinois-shaped cornflake on eBay on Friday night for $US1350 ($1481).

“We were biting our nails all the way up to the finish, seeing what would happen,” said Melissa McIntire, 23.

“There’s a lot of relief involved.”

The winner of the auction, which lasted more than a week, is the owner of a trivia Web site who wants to add the corn flake to a travelling museum.

“We’re starting a collection of pop culture and Americana items,” said Monty Kerr of Austin, Texas. “We thought this was a fantastic one.”

Kerr owns TriviaMania.com and said he will likely send someone to Virginia, where the sisters live, to pick up the flake by hand, so it will not be damaged.

This is not the first corn flake that Kerr has tried to buy. He said he purchased a flake billed as the world’s largest, but that by the time it was delivered it had crumbled into three pieces.

McIntire and her sister Emily, 15, listed the corn flake on eBay last week, but eBay cancelled the auction saying it violated the Web site’s food policy.

The sisters restarted their eBay auction, advertising a coupon redeemable for their corn flake, instead of the cereal itself.

The McIntires said they’ll likely use the money for a family vacation.

Copycat items have popped up on eBay, including corn flakes shaped like Hawaii and Virginia.

There has also been a potato chip shaped like Florida, and Illinois corn flake paraphernalia, including T-shirts and buttons. 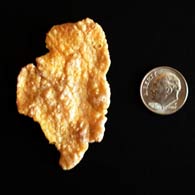 I have a whole box of cornflakes in my pantry, which will be included as part of the auction, and I am pretty sure that somewhere inside the box there will be a flake that is shaped just like Australia!!

The Australian one was in my box, tried on ebay but no-one was interested, will try again!