Some recent comments from the GuestBook:-

He is a FAKE – check out the link someone else pointed out – seriously – this dude is a liar and a fake and wants to be famous trading off the back of a false sob story!!

There have also been several threads on the Bulletin Board of a similar nature, most notably from my two main Bulletin Board detractors, eddiesloper and skeptik. Eddiesloper is pretty overt with his criticism, happy to directly accuse me of being a fraud and a hoaxer.

Skeptik is obviously skeptical(!!) and has many questions to ask in an effort to somehow prove that I have some mysterious hidden agenda, or to use his own phrase, a “big fat scheme with dubious motivations”.

I understand where these suspicions and questions come from, which in the main part, for those who haven’t seen it, is an article that appeared in The West Australian newspaper on 19th March.

Someone has posted the article on the internet, and it can be seen here, simply click on the image below to see a larger version: 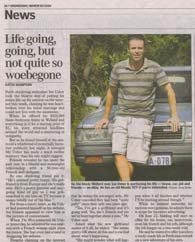 Unfortunately I cannot find the article on The West’s website any longer, I assume they only keep items on there for a certain length of time.

I include the article here, because although it presents me, my motivations and my honesty or otherwise in a bad light, I have nothing to hide. I also believe that most people are intelligent enough to read between the lines of the wild assumptions of a trashy tabloid article.

This article has been referenced several times in the GuestBook by “someone who knows” from Perth, who calls me a liar and a con-man, based on this “evidence”.

What I find interesting is how easily some people accept the words of a tabloid journalist as proof of something.

Do you really think that Katie Hampson, who wrote the article, and who has never even met me, has any idea of how I feel about the break-down of my marriage? Of course not! Katie Hampson knows nothing about me or anyone else in my life, other than hearsay gathered from some unknown colleague at my skydive club, who sees me at most once a month.

I parted from my wife about two and a quarter years ago now, and yes, it still saddens me now – we were together for over 12 years. However, because I try to move on in life, and over a year after our separation start seeing someone else, that obviously does not mean that I have completely got over what happened, but perhaps it does mean that I have started the process of accepting and moving on.

How long do you think Katie Hampson would expect that I should wallow in sadness, and not make any effort to build a new life for myself? Three years, five, ten? Would that prove that I am still saddened by the failure of my marriage? It takes what it takes, life goes on, and we have to do the best we can to deal with the stuff life throws at us.

In the “WHY” page of the website I say that the initial reason for starting this project is a sad one, but I also state:

“So now that I have been spurred into action by events in my life which have brought me to this point, I am pretty excited about the whole thing. I am looking forward to moving on, and shedding the past. I am excited about the future, and really having no idea where events might lead me. I love the adventurous nature of the project, and am excited about a new start.”

This text has remained unchanged since the website went live on 14th March.

So although the initial reason is sad, I feel I am now moving on, and if you have listened to any interview I have done, I have always stated that I hope that shedding the house and belongings that my wife and I shared together will be the final step I need to take in that moving on process.

I don’t know what you think, I have no idea, because everything I have said and done has been in a spirit of truth and integrity.

To the skeptics, you can keep asking your questions, there is no hidden truth to get closer to, no secret agenda to be revealed, no skeletons to be released from the closet, no “big fat scheme with dubious motivations”, no “trying to hide the true nature of what I am doing”. What do you feel you need to know next? What type of cereal I have for breakfast? What the colour of my underwear is?

However, I must point out that these couple of skeptics are a tiny, but vocal minority. I really must thank the thousands of others who have offered good wishes, encouragement and support, on the GuestBook, in the Bulletin Boards, and via email. Thanks to all of you. You are the people I would prefer to spend my time answering questions from and talking to, rather than trying to convince a couple of negative minds that the schemes they see everywhere do not actually exist.