After over twelve hours of train travel, broken by a wait of a couple of hours at the French/Spanish border, I arrived in Barcelona, and made my way to my friend Borja’s apartment. I met Borja about 8 years ago, when living in the UK. He came from Spain for the summer to improve his English, and lived in the same house as me for three months or so. We became friends, and although we have not seen each other since, we have kept in touch.

Unfortunately, this weekend, Borja had already arranged to travel to the other side of Spain to see his parents, and would not be at home. At his apartment I met Carlos, his flatmate, and was made very welcome. I put my bags in Borja’s room, and pretty soon had a cold beer in my hand.

An hour later I set off for the airport to meet Paula (see goal 33), who was flying in from London, and after a bit of mis-communication we finally met up.

On Sunday morning we were up fairly early, and set off on a sight-seeing tour of Barcelona, after receiving some tips and hints from Borja’s friends.

Barcelona is a wonderful place, with wide-open streets, a relaxed friendly atmosphere, and a very easy-to-navigate public transport system. It was the home of famous artist and architect Antoni Gaudi (1852-1926), and his influence can be seen everywhere. We walked through a couple of the main city streets, marvelling at a couple of his buildings, and then on down Las Ramblas, the touristy centre of the city.

In a shop we stopped to look at postcards, and I saw many pictures of an incredible-looking building, which would merit further investigation.

Off to the sides of the main street, older houses and alleyways led off in all directions, and we wandered through them towards the waterfront area. After lunch there we took a cable car across the harbour, which offered fantastic views of the city.

From the far end of the cable car we headed to Park Guell, another of Gaudi’s amazing creations, and from there onto the Temple de la Sagrada Familia, the building spotted on the postcards earlier.

To describe this building as incredible would be an understatement. It is quite simply the most awe-inspiring building I have ever seen. And before yesterday I did not even know it existed.

The construction of it began in 1882, and Gaudi oversaw the work for 40 years, until his death in 1926, by which time about a third of the building was complete, only one of the three amazing facades being finished. Work still continues today, over 120 years after it began, and there is still a long way to go!

Take a look at the pictures below, but I have to make it clear that the pictures could never hope to capture how majestic and how huge this place is.

Inside, the place was equally majestic. It was a bit like a builders yard, with construction materials spread about, and enormous scaffolding constructions everywhere, but magnificent sculpted pillars support a high ceiling, all designed to look and feel like a huge forest, with tree trunks supporting a leafy canopy high above.

It was very peaceful and relaxing, and we just sat for some time gazing up at the incredible place. My lasting memory of the afternoon will be of a French girl, maybe twelve or thirteen years old, who sat near us, humming and whistling to herself, as she sketched the ceiling on a small drawing pad, completely absorbed in her own world, seemingly unaware of anything else around her. She just seemed so happy and peaceful.

I took a lift up into the towers, where a network of thin passages and spiral staircases led to tiny bridges and balconies high above the city. Every new turn revealed another amazing view.

After dinner we did a bit more sightseeing, and although the huge multi-coloured building pictured below was pretty impressive, nothing could rival the Sagrada Familia.

If you ever go to Spain, I would highly recommend Barcelona. 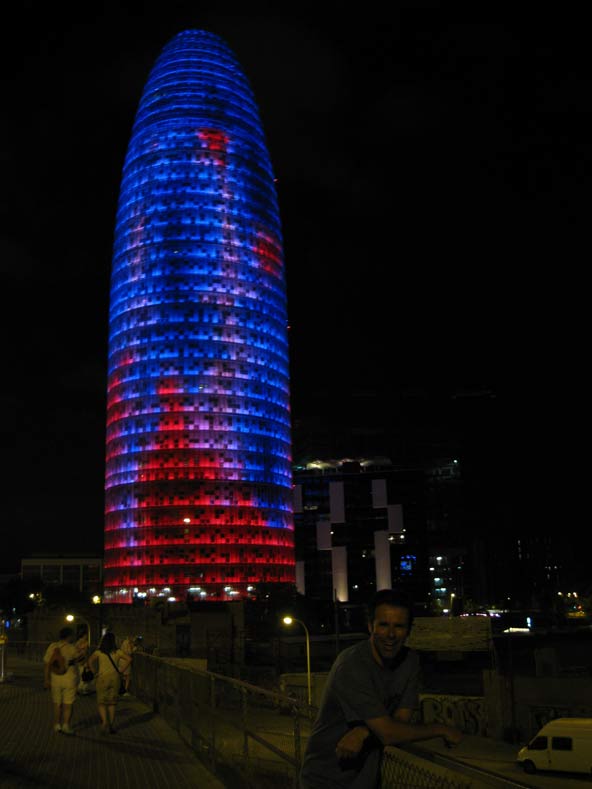 What great photos! I love all this vicarious travel I get to do, thanks to your blog!

Regarding the goal to get Paula Campbell’s name in top 10, I think Paula is going to have to do the lion’s share of the work there. She should start her own blog and start cyber-networking and just get her name out on the internet as often as possible. The name, Paula Campbell, is a relatively common name, so it is much harder to satisfy this goal than with a name like yours or mine. (I’m fairly sure I’m the only Yvette Francino in the world.)

I, about that search engine goal :
I can help with this, and I guess a lot of your readers could link to her blog/website and have her rank in the top 10 in a few weeks…
but she has to have a blog or website in the first place !

if you just put a simple (even almost empty) page up for here, we could start linking to it…