After the article appeared in Sunday’s UK newspaper Mail on Sunday, and online here, I received many emails from all over the world, many expressing how inspiring they found my story to be. I was very flattered by such support and encouragement, but even more flattered at some of the offers of assistance that I received.

The most amazing was from Jelene, who lives in Miami, and felt an overwhelming desire to help me out. We emailed back and forth, and I was stunned when Jelene told me she had booked me in for a night at the Seminole Hard Rock Hotel and Casino, not too far north of Miami International Airport.

Eventually my delayed flight landed just after 8pm. We had taken an unusual route, north from Heathrow over Scotland, then around Iceland to the north to avoid the volcanic ash cloud, across Greenland, then down the US east coast. From Iceland to Greenland, and over Greenland itself the views were stunning.

After the usual round of questions at US Immigration, caused in part by arriving on a UK package holiday on an Australian passport, I headed for the car rental office. I had booked a complete Florida fly/drive holiday once again, as it was the same price as a one-way flight, and gave me a cheap car for a week too. Once again I will just not turn up for the return flight to the UK!

After some minor navigational challenges I found the I-95 North, and eventually the Hard Rock itself at around 11pm, and a room was ready and waiting in my name. Jelene and John spotted me as I was checking in. They were also there for the night, flying out to Indianapolis in the morning to see a couple of Dalai Lama lectures.

We headed for the bar, and although it was now the equivalent of 4am UK time for me, I think I managed to be reasonably lucid! They treated me to dinner, refusing to let me pay anything, and insisted on coming to see the room they had managed to get me.

When I opened the door I was amazed. Jelene had somehow convinced the Hard Rock to upgrade me to a suite, and it is LUXURIOUS! I have a living room, two TVs, and a spa bathroom you could play a game of tennis in! Brilliant!

As I stated in the interview for the Mail On Sunday, I just continue to be amazed and humbled by the generousity of the wonderful people that I meet on my travels. Thanks to both Jelene and John for their fantastic kindness. Thanks also to the Seminole Hard Rock Hotel and Casino for my fantastic room.

What a welcome back to America. I love it here! 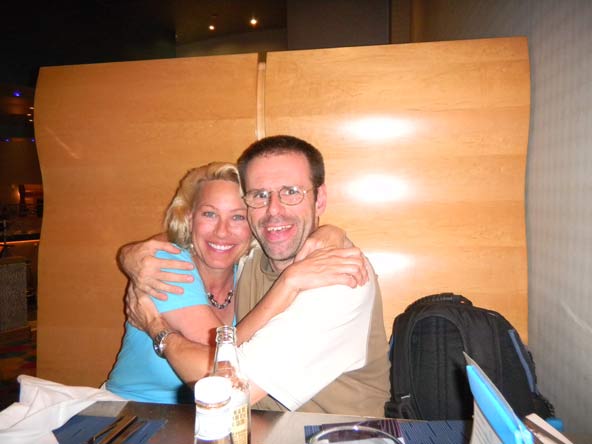 That's my girl! Doesn't get any nicer than Jelene. xoxo