While in the UK I didn’t manage to achieve any of the goals-related tasks that I had hoped to, but I had a fantastic time all the same.

From Darlington I headed south again on Thursday, and stopped off with friends Mark and Bek in Nantwich. Mark featured on the blog very early on, when he took me on a microlight flight. We had planned another flight on this visit, but unfortunately the winds were a bit too strong. It was still good to catch up over a few beers.

From there I headed cross-country to visit my cousin Christine and family, Mr Chris, and kids Ellie, Matthew and Owen. The weekend was planned as a surprise for Mike’s 50th birthday, and many more family members and friends were hidden in the garage when Mike turned up. It was a brilliant weekend, visiting Alton Towers theme park, a birthday party night out at the pub, and a day at Uttoxeter horse races. There was a lot of fun and laughter, and my winnings on a 5-to-1 success were soon volunteered by the others to be “invested” in a large round of Pimms in the Champagne Bar.

I was sleeping on the couch in the front room, as all beds were taken, and Chris wanted to be added to my list of couchsurfing hosts. Thanks to all, what a fantastic weekend. It is so nice to have such a fun family to spend time with whenever I am back in England.

I followed Martin and Rachel south on Sunday evening, back to London, and had a late night, which included answering many emails from people who had read the double-page article in the Mail On Sunday newspaper, and a radical last minute re-pack.

I am taking all of the fundraising photos with me to America, as I hope to be able to continue my fundraising efforts for my $50,000 charity goal. If you would like to help out with this one, there is still a long way to go.

At Heathrow airport, my new suitcase, kindly donated by Bruce and Lizzie, filled with photos, weighed in at over 28 kilos. My hand luggage, in which I had tried to “hide” some of the heavier items was over 11 kilos. My allowances for the flight to Florida were 23kg and 6 kg, so I was more than 10 kg, or 22lbs over! And I have really trimmed my stuff down too – I have hardly any clothes with me.

After a consultation with the Virgin staff, and following a bit of a second re-pack I got the hand luggage somewhere near, and the main suitcase at just under the maximum 32kg, having to stump up the extra 30 quid for excess baggage charges. Somewhat ironic, when I was pictured in yesterday’s newspaper with Sir Richard Branson, who is a supporter of my charity goal that the photos are to raise funds for. Oh well, it was cheaper than posting them all to the States, I imagine. 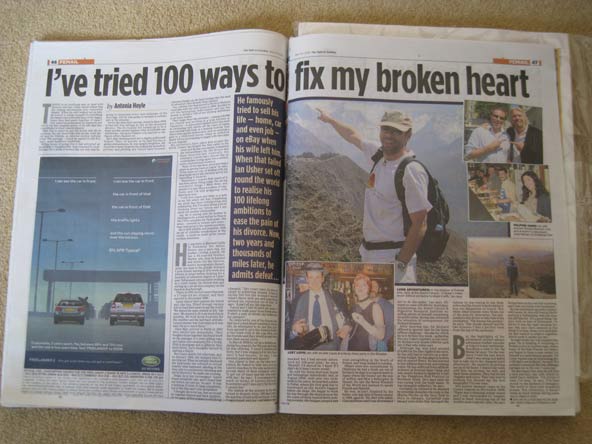 At Heathrow security my harmonicas caused more questions, and I had absolutely everything unpacked from my hand luggage for the first time ever. There is a surprising amount of accumulated travelling junk in there!

My flight is now delayed, I think because of diversions over the Atlantic due to the volcanic ash from the Icelandic volcano, so it looks like it is going to be a very long day.