I had another touristy day today, first catching the bus to visit The Temple of Heaven. It was pretty nice, although perhaps not as spectacular as The Summer Palace was yesterday. Just as interesting, and much more amusing, was the wide variety of karaoke singing, and impromptu dancing that was going on in the park, all to the sound of Chinese music distorted at maximum volume through tiny portable speakers!

My next stop was the final place on my tourist list of Beijing, and I think I had saved the best ’til last. I caught the subway from The Temple of Heaven, and wandered through Tian’anmen Square again to the south entrance of the Forbidden City. Once I negotiated my way through the minefield of sales people and potential guides, I entered what was once the palatial home of many Chinese Emperors.

The place is absolutely huge. I wandered through the centre of the open palace, and through some of the main temples, until I finally reached the north gate.

I then headed back south through the western section, and finally north again via the eastern side. This took several hours.

Apparently there are 999 rooms, one short of the perfect number that is believed to be heavenly. From a look at the map, it looks like only about half of the place is open to wander through, huge areas closed off, or undergoing restoration.

The huge open centre section is impressive, but interesting too is the labyrinth of rooms and passageways to either side. An emperor could easily get lost in there! You would have to live there for months to really know your way around.

All of the rooms have wonderful names. For example, I passed through the Hall of Supreme Harmony, the Palace of Earthly Tranquility and the Hall of Mental Cultivation, among many other equally grandly named spaces. It’s all very impressive.

I finished the day off by borrowing a bicycle from the hostel and heading for the bank, making the possible mistake of throwing myself headlong into rush hour traffic on the rattliest, wobbliest bike I have ever ridden! The cycling and traffic is chaotic, and the trip was hilarious and terrifying in approximately equal measure. I’m pretty sure my travel insurance doesn’t cover this kind of extreme activity!

Finally, a couple of random things I have learned about China:-

Spitting is a national passtime. Male or female, it doesn’t matter. And the more hawking and gutteral noise you make before the big spit, the better! And you can spit anywhere, footpath, road, temple, it doesn’t seem to matter!

Foreigners pay a different price for many things. I bought some fantastic bread this morning at a tiny little window outlet. The woman in front of me got three spicy hot bread rolls, gave 2 yuen, and got some change. I bought two rolls, gave 2 yuen, and got nothing back but a confused look. Upon my return later in the afternoon, I bought three rolls, and the asking price was 6 yuen. This is th point where I made a stand, and simply paid 3 yuen, which was accepted without question. I am pretty sure I still overpaid. It is one of the tastiest breads ever, and 3 yuan is 45 cents, so I’m not complaining!

Public toilets can be pretty hit and miss, literally! Many are squat hole-in-the-ground type, and accuracy seems to be a bit of an issue with some of the locals! Another very important lesson to learn is that each cubicle (that is if you actually in a toilet block with the luxury of a cubicle at all) does not have it’s own supply of paper! Don’t discover this by trial and error! Collect your paper from the communal paper dispenser before heading for your cubicle.

I visited one toilet today, optimistically labelled as 4 Star by the Beijing Tourism Administration. (It’s somebody’s job to go around giving out star ratings for toilets!!) I couldn’t help but notice this, as the sign was proudly displayed above the paper dispenser that served both ladies and gents toilets!! 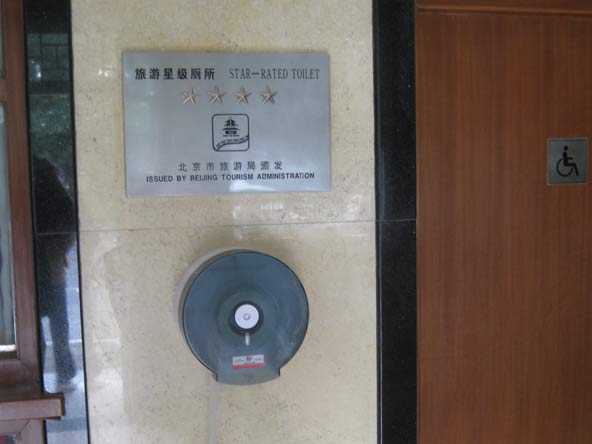 Fascinating place, Beijing! Only place in the world I've ever seen a star rating for a toilet.

Thanks as always for sharing, especially considering your creative work-around with the blog posting! (Makes me a little nervous for you, frankly. Those Chinese certainly don't like to get talked about, do they? As long as you by their imports!)