Goal 64 – Walking on the Chinese Wall.

“He who has not climbed the Great Wall is not a true man.” Mao Zedong.

Well, I guess finally I can truly call myself a man now, as today I got to climb and walk along the Great Wall of China at last.

I was hoping that Lancy was going to be able to join me, and our plan was to go out to one of the older, less touristy sections of the wall, where you have to get a bus (or tour) to one point, then can walk a 10 kilemetre section of the wall, and organise return transport from there (or catch your tour bus back!)

But the forecast was for the weather to get much worse, with predictions of heavy snow to come, so in the end I had to make a practical decision, and decided to at least go and see the wall today. There is a much more accessible section, apparently frequented by hoards of tourists, but from pictures I had seen, it still looks quite spectacular.

So I was up and dressed warmly first thing this morning, and as I made my way to the local bus stop in the darkness, the snow had already started. The bus took me to a nearby bus station, where I transferred onto a long distance bus, and an hour and a half later we approached Badaling, site of a section of the wall.

The snow had been falling all morning and was getting thick on the road, and with amusing inevitability, when we stopped on a hill, the bus started to slide, and eventually ended up completely stuck. I opted to walk the rest of the way with a few of the locals, and 15 minutes later arrived at the entrance to the wall itself.

On both sides of the valley the wall headed steeply uphill, looking almost exactly as I had expected it to, apart from the fact that higher up it just disappeared into shrouds of mist and snow. There were quite a few people about, and several larger tour groups, but I suspect that the weather meant numbers were much lower than on a nicer day.

I bought my ticket, and decided to head up the eastern section first, as there were a lot less people going that way. This section of the wall, which in total covers thousands of miles, has been extensively restored, and is in very good condition, although perhaps somewhat less authentic than many older sections which are not so accessible to tour buses.

After a steep, snowy, slippy climb I reached a fortress at the top of the hill, and was greeted by my first and only salesman of the day – the bad weather must keep all but the hardiest of them away too. A few more people had made it that far too, but the wall continued, and the snow on the next section was completely untrodden.

A small extra effort always reaps rewards, and for the next section, I had the wall completely to myself for over half an hour. At the end of the section open to the public, the wall continues, but has not been restored, and looked very appealing, but unfortunately, due to a huge spiked fence, I had to turn round, and headed back down to join the throngs.

I headed up the other side among larger groups of visitors, all of us struggling and laughing in the treacherously slippy conditions. At the top, many groups were loudly taking photos, but once again, an extra hundred yards of semi-skiing down the next, steep slippy section meant I had the wall to myself again.

Afterwards, I headed back down to the valley, and discovered that the buses were still not running up the Badaling road, so had to walk a couple of miles down to the main highway to catch a bus back to the city. I would have caught a taxi, but only had enough cash left for the bus and a bite to eat!

What a great day out, made so much better I think by the snow and tricky conditions, which meant it was a much more unique and personal experience, in what could have just been a heaving tourist trap location. 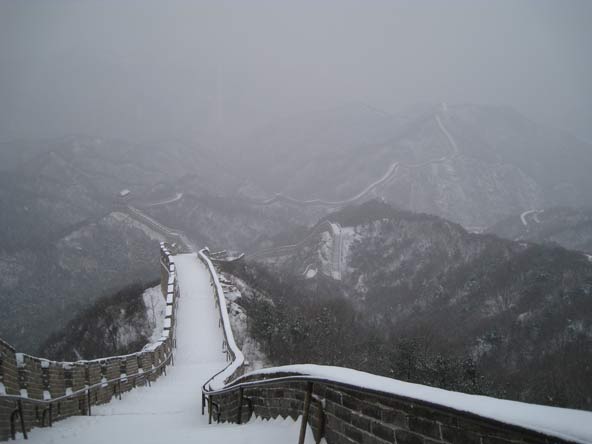 Goal 64 is also number 4 of the “New 7 Wonders of the World”. Machu Picchu, Christ The Redeemer and Taj Mahal still to see!

Fantastic pictures, just amazing. Definitely better that you experienced it with snow!