Summer Palace on a winter’s day

When I got up this morning I discovered that there had been at least 6 inches of snow overnight. I wrapped up warm and headed out to find some breakfast, settling for fruit as an easy option, and then made my way to the subway, heading for the Summer Palace, on the outskirts of the city.

The huge park and spectacular temple on top of the hill overlooking the lake all looked very picturesque with a blanketing of snow, and at times the sun made a brief appearance too, to complete the scene. I wandered for a couple of hours among hoards of tour groups, all usually wearing identical caps to distinguish them from other, almost identical groups.

My next stop, after a fantastic mystery omlette-sort-of-thing from a street cart, was Olympic Park, site of the 2008 Olympics. The “Bird’s Nest” Stadium is eyecatching, and the wide boulevard nice to stroll along, albeit it with thousands of other visitors too, and once again plagued by the touts selling all sorts of rubbish.

As it started to get dark my final stop for the day was the wonderful night market, filled with a mind-boggling array of wierd and wonderful foods, most grilled on sticks over a barbeque, and simply eaten as you wander along. I saw, grilled on sticks, among other things, scorpions, seahorses and starfish. And that was just the stuff I recognised! I stuck with slightly more familiar choices for dinner! 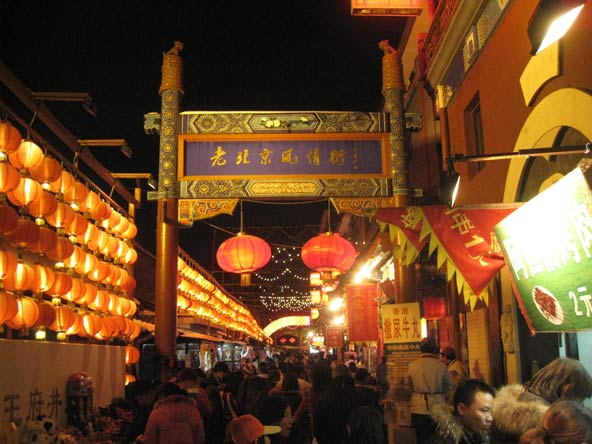 This really is an unusual place! Once again I am interested in how the travelling attitude to prices can shift very quickly. Here you get about 6.6 yuen to a US dollar. A night at the hostel costs around 70 yuen, pretty good value. I could hire a bicycle from a street vendor for 24 hours for the princely sum of 20 yuen (that’s around $3, for a day!). But I was appalled when I found a Starbucks, and a small cup of coffee was going to cost me 26 yuan. That’s 4 bucks for a coffee – outrageous! The best vale I have seen is petrol, at 1 yuen per litre, which is about 15 cents, or around 60 cents per gallon. No wonder the taxis here are so cheap!

It’s all just so different and so interesting.