On his last day in Rio Val was very keen on taking a dual hang glider flight, and so after another late night we got up early and headed off to the far end of the Metro system, and took a taxi to Sao Conrado, where we met hang glider pilot Konrad.

The wind wasn’t right in the morning, so we took a hike up another nearby mountain, offering more awesome views of Rio. 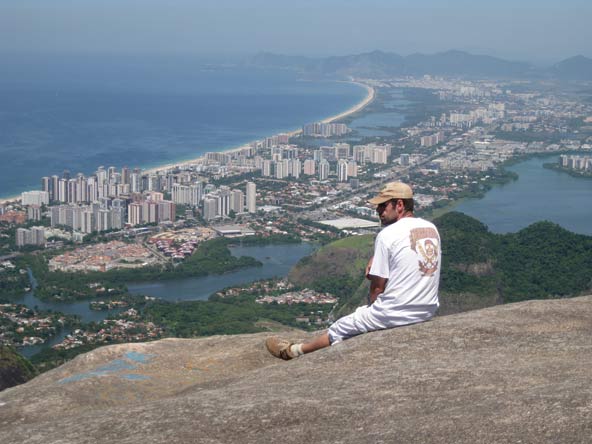 When we spotted hang gliders taking off from the launch site below us, we headed back down, and Val geared up and received his instruction, and before long they were running down the steep ramp, and launching into the air. It looked fantastic, and I would have really loved to have a go too. However, the price was way above my meagre budget, particularly as I have spent so much more here in South America than I planned to, with the extra $800 that LAN Airlines charged us! (Still haven’t had a response to my customer service email – very poor customer service!!)

I glabbed a lift down to the beach where Val would be landing, and he was ecstatic. It certainly looked pretty thrilling. More info on flights at the Rio Hang Gliding website.

Eventually we headed home, and Val had to pack his bags to head to the airport. It was sad to see him go, as Fabio and I waved him off in a taxi. We have had a fantastic couple of weeks, and he is a wonderful travel buddy. Hopefully we will get to catch up again soon as my trip comes to an end in New York.

I am now pretty-much at the end of my time in South America, but as yet I have nothing organised to actually leave here – no flight booked, and my next destination not yet quite decided upon. Still, there could be worse places to get stuck than the most beautiful city in the world!!

Happy to hear you are visiting Brazil. 🙂
Hope you have a great time there.