I met fellow Aussies Paul and Kristi in the backpacker hostel that I stayed in while in Santiago, and as we were all going to be in Rio for Carnival, we had made tentative arrangements to meet up. However, Carnival, as you can imagine, is pretty wild, and plans tend to change at short notice, and travelling across the huge city can often take longer than expected, with street closures and manic traffic!

So it was a wonderful surprise to see them at the appointed time and place, picked out on a Google map, and suggested to all who expressed interest in a hike up Corcovado Mountain to see the incredible statue Christ The Redeemer, which gazes down from on high over the whole of Rio.

As I did with Table Mountain in Cape Town, I wanted to walk up to the top of the mountain, instead of taking the tourist-trap train up, and Val was keen too. Along with Samuel from our couchsurfer home, we had taken a bus to the Metro, the Metro to Botafogo station, and finally a taxi to beautiful Parque Lage, where the trail up the mountain begins.

Paul and Kristi hadn’t quite realised how steep the climb might be, and hadn’t come too well prepared, wearing flip-flops and light open sandals respectively, but did fantastically well. It took about an hour and a half in hot sweaty conditions up a steep jungle trail to reach the top, where we joined the crowds who had arrived on the train, and in an endless stream of packed minibuses.

It was here that our troubles began, when we found turnstiles, where everyone getting off the buses would present their tickets. The guards manning the entry point would not let us in, and as far as we could gather, we couldn’t buy tickets there either. A few other people had been doing the hike too, and we found someone who could translate for us, as Samuel had chatted to the guards, but we couldn’t quite understand as he tried to explain the situation to us.

It turned out that the turnstiles were a new addition, just for Carnival, to fleece the gringo tourists, and the group of local trekkers all refused to have anything to do with paying for entry. The ridiculous part of the situation was that we couldn’t buy tickets at the summit, they were only sold down at the start of the minibus route way below us! “That’s Brazil!” said one local in resigned voice!

We managed to organise a free return trip in a minibus for one of our group, and Kristi volunteered to head down and back, returning in half an hour or so with five tickets, and we finally went through the turnstiles to see Christ The Redeemer, or Cristo Redentor as he is known here.

I don’t know what I was most impressed by, the awesome huge statue, or the breath-taking view over the city which is often referred to as the most beautiful city in the world. It was very crowded on the top, but that didn’t detract one bit from the incredible view and location. Rio certainly is a lovely-looking city.

Thanks to Val yet agian for joining me for this trip, that’s now a total of six goals he has joined me for. Thanks also to Samuel, Paul and Kristi for coming along on such a hot sweaty climb, what a great experience.

We took the minibus back down, as this was included in out ticket price, and all headed off in different dirctions, Samuel to the beach, Paul and Kristi to prepare for the spectacle of Sambodromo that evening, and Val and I to Sugar Loaf Mountain, which is pictured in the centre of the panoramic view above.

We planned to climb that too, rather than take the cable car up, and tried a couple of different trails. The first was the wrong one, and took us to the foot of a huge steep cliff wall. The second trail, around the back of the steep cliff was more managable, but we reached a steep section that would have been much safer with ropes, as there was one section with a large drop below. We decided to return to the track, and somewhat disappointed, but pleased to have made a wise decision, we had to finally admit defeat and catch the cable car to the summit just as the sun was setting.

The summit offers further incredible views of this stunning city, and we sat sipping beers as the sky darkened and the city lit up below us.

What a fantastic day in the mst beautiful city in the world!! 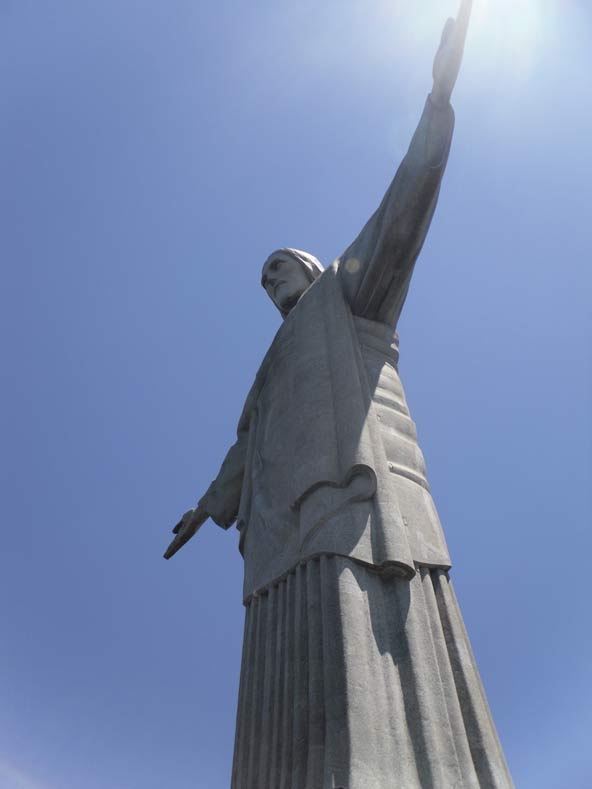