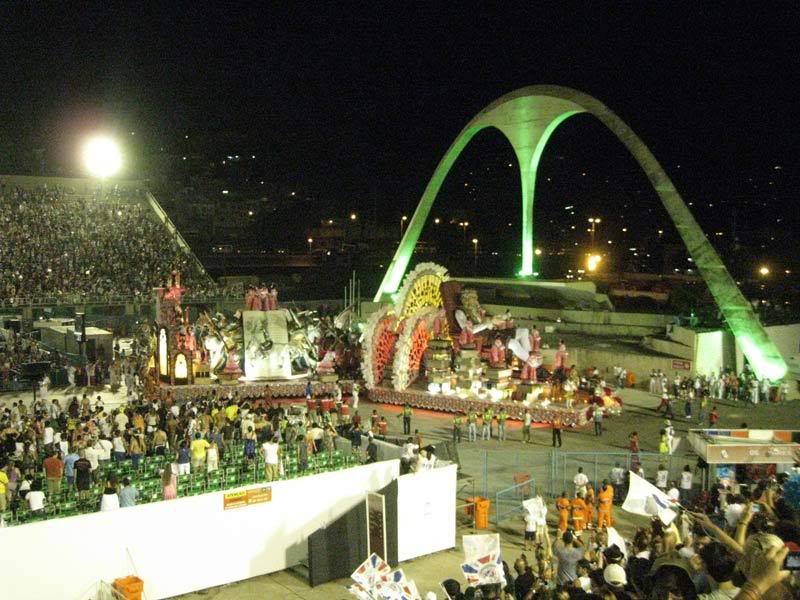 We flew into Rio from Iguassu, and after a bit of negotiation with a group of taxi drivers, managed to find someone who would take us to Fabio’s home for what seemed like a reasonable fee.

Fabio is another couchsurfing contact that Val arranged for us, and he has a great little appartment in the outer suburb of Grajau. He is on the top floor, and has a rooftop space with an awesome view. In fact, we ended up sleeping up here under the stars later that night.

After a quick bite to eat, Fabio and his mate Samuel wanted to take us to the beach, and before long we were sat under sunshade umbrellas at Ipanema Beach, beers in hand, with a large group of Rio locals. The backdrop was beautiful, and just how I imagined Rio would be.

The beach was packed, a sea of yellow umbrellas stretching as far as the eye could see, with the locals parading up and down in tiny tight trunks and skimpy bikinis! Quite a sight!

Towards the end of the afternoon we climbed a rocky promontory at the end of Ipanema Beach and watched the beautiful Rio sunset, which was applauded by the crowd of on-lookers.

After a shower back at home we headed out to a local street party, but were a little surprised that it was all over by the time we got there. A bar, and some beer for the rooftop back at home ended the evening, and a fantastic first day intro to Rio.

After a late BBQ lunch the next afternoon Val and I took the Metro to the station nearest to the Sambodromo, hoping to find some reasonably priced tickets. On the internet, tickets appeared to cost anywhere between US$75 to $1,000, but we had heard that it was possible to buy cheaper tickets locally.

Just outside the Metro we found several touts, and after some slightly confusing negotiations in Portuguese, we had two tickets for seats in Sector 6, at a bargain price of $25 each – marvellous.

Minutes later we had a couple of beers in hand too, and felt like locals, ready for Carnival.

The view we had wasn’t the best, as our section of seats was set back from the huge concrete runway that the parade would come along, but we could still see pretty well.

When the first parade began it took quite a while to reach our area, as each group has about 80 minutes to travel the whole length of the Sambodromo. But the atmosphere was amazing, everyone up on their feet, singing, dancing, and waving flags.

When the first float arrived it was HUGE, followed by what must have been thousands of dancers in amazing costumes – the flow of performers was almost endess – and this was just the first of six parades on display tonight!

We watched the second and third parades, both equally impressive, especially the magician-like section at the front of the third parade, which under the cover of large magicians’ sheets, performed some lighting fast costume changes.

We ended our evening somewhat early, heading out at around 1am, having an early start planned for the next morning. I don’t think either of us could have managed another four hours on the rock-hard concrete seats either.

We caught the Metro back home, among many brightly-costumed performers heading home too.

What an experience! Once again, thanks to Val for his wonderful company, and to Fabio and Samuel for their fantastic hosting, and advice and directions.