My friend Bek from Australia lived and worked in South America for a couple of years, and she emailed me with several suggestions of things I should see or do here. Her top recommendation, an absolute must, she insisted, was to go on a favela tour with the guys from www.bealocal.com

So once again it was an early start, and I made my way across the city to a hostel in Copacabana, and was picked up with the rest of the tour group. We were taken by minibus to the bottom of a huge hill which led up into the heart of Rocinha Favela, a shanty town housing up to an estimated 150,000 people packed into Rio’s biggest favela.

From the bottom of the hill we were taken high up into the favela, each on the back of a motorcycle taxi. It was a hair-raising ride, as it had started raining over night, and the greasy roads didn’t seem to slow the traffic one bit! At the top our tour regrouped and walked down into the tiny chaotic streets and alleyways.

There is no form of planning, permission, or real organisation, and the favela just grows as people build homes wherever they can. The spaghetti of electric cables and water pipes is incredible, and the streets are a confusing, litter-strewn maze.

Drug dealing is prolific, as is gun ownership, but among this chaos, around 98% of the community are poorer families simply trying to live their lives.

Our guide Daniel gave us a fascinating overview of life in this packed, dirty, poverty-stricken area. It certainly is a world apart from anything else I have seen on my travels. A fantastic tour, and highly recommended for anyone coming to Brazil.

We stopped at a local art gallery, where favela residents’ paintings reflect their life in this amazing city. We stopped at a bakery for breakfast, and at a childcare centre run by volunteers. There they take in children through the day, so their parents can go to work, perhaps selling drinks on the packed beaches, or collecting used aluminium drinks cans. 65 cans weigh about a kilo, and are worth abound 1.5 Reais, or 75 cents.

It’s a tough life in the favela, but once again, as I have been in many poorer places I have travelled through, many people seem to have a smile on their face, and a cheerful greeting to offer.

In stark contrast, just a few short minutes away is the rich beachfront suburb of Copacabana, where I went looking for Pris, who I met in Australia a couple of years ago, as she visited her Aussie boyfriend there.

On a sunny day the beach at Copacabana is packed, but on this rainy day there weren’t so many people around.

Later in the evening I headed out with my couchsurfer hosts Fabio and Samuel to a couchsurfer meeting at a local pub. There we met up with many other local couchsurfer hosts, and many of their guests too. It was fun chatting to other travellers from all over the world.

My final day in Rio the next day was pretty quiet. Samuel and I did some shopping, and we had a quiet BBQ on the rooftop that evening. Thanks again to my wonderful hosts Fabio and Samuel for making my stay here in Rio so much fun. 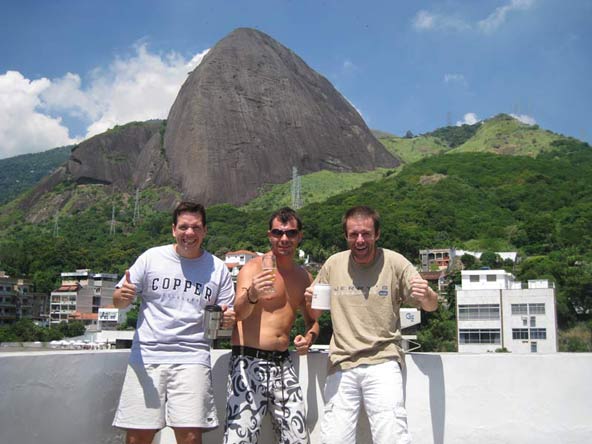 And so it’s onward with the travels again today. I am the only one up and about, and am trying to pack my bags as quietly as possible. I fly back to South Africa in a few hours, and feel quite sad to be leaving South America. I have had a fantastic month here, so much of that due to the people I have been with, and have met here. Thanks to you all.