Internet use at work is always a source of entertainment. Sometimes there can be a fine line between what could be classed as work, and what is purely personal use. For example, the other day I was tasked with finding a suitable means of back-up for important computer files in the shop. For me, this meant I could legitimately surf the web for all sorts of interesting computer gadgetry, as well as chat to a couple of friends on Messenger!

However, a couple of days ago, when I sat down at a computer that one of the other staff members had been using, they had no swift answer as to why they needed to access their FaceBook profile.

But just before I clicked to close the window I noticed the topic on display, and feeling (only a bit) guilty, I started to read, amazed and excited.

Three weeks ago, I mentioned an event called “The Big Freeze”, which occurred in New York’s Grand Central Station.

See blog entry: 44 days to go!! My final comment was, “I would have loved to have seen it, or even better, have been a part of it!”

So this is what I found on the open FaceBook profile: 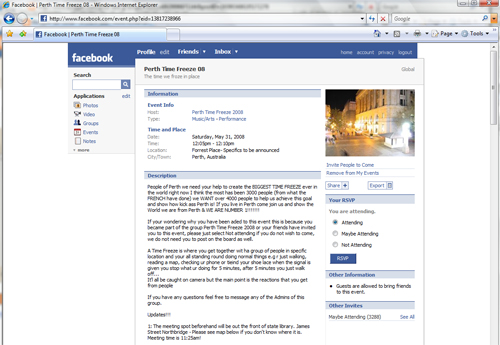 So only three weeks after writing about it, here was a chance to join in what will perhaps be the biggest freeze ever done! And if I hadn’t sat down just then at that computer, I would have been hearing about it tonight on the news, instead of having been a part of it. Isn’t it amazing how things like this happen?

So this morning I took the train up to the city, still nursing a bit of a hangover from Paula’s Leaving Do last night (see yesterdays blog).

Unfortunately Perth’s usually reliable weather let us down this morning, and the train ride to the city was dark and gloomy. We passed through a couple of storms on the way to the city, and it looked like it was going to be a very wet event.

At the appointed time we met at the State Library for a quick briefing, and people started heading off to the mall in the city centre where the freeze would happen. The skies were still dark and rain was lashing down , so we waited for a while under cover at the library.

Eventually the rain eased and we made a dash for the city, and got undercover again before the next downpour. At the appointed place there were hundreds of people sheltering wherever they could under walkways and in shop doorways,but just before midday many people headed out into the shopping mall.

I was just checking my phone to see what time it was when the horn went, and everybody just stopped. I froze looking down at my phone, but could look around without moving my head.

There were people frozen everywhere, some guys in front of me had a piano in the middle of the street, others were pointing, and there were umbrellas everywhere.

It was absolutely amazing, as a sort of silence and stillness descended over the square, broken only by what sounded like the horrified screaming of a terrified child – very surreal. But the rain continued to pour down, and other shoppers hurried in and out around us. I was interesting to listen to what people had to say as the walked among us.

Eventually the horn went again, and we all began moving, and a big cheer went up. It was an extraordinary experience. The atmosphere afterwards was great, complete strangers chatting excitedly to each other about what had just happened.

Melanie and her kids had come with us, but Melanie had had serious doubts about her kids being able to stand still and quiet for even one minute, but they both did very well, enjoying being part of it all, both hyper-excited to have stayed still for the whole five minutes.

I don’t think that the number of freezers will have been anywhere near enough to have been a record, but it was still a fantastic event to take part in. Thanks to those who organised it – very well done.

Here are a couple of pictures of a wet and windy gathering at the library:

This first one is the official video from the organisers:-

(Note: I am in this video at about 2 mins 56 secs, centre of the screen looking down at my phone.)