The next day I set off for Seattle with Heather, a friend from Chicago who was over on the west coast for a few days. We took a walk around Portland in the morning, but the weather had taken a turn for the worse, and eventually we gave up and headed for the freeway north towards Seattle.

We stopped off in Tacoma pretty much as a random choice, and both wished we had set off earlier, as we saw not only the biggest totem pole in the world, but also discovered that there was a glass-blowing museum, featuring a lot of work from Dale Chihuly, whose work I had admired in both Oklahoma and Las Vegas. Unfortunately, we were too late and it had closed for the evening.

I also found out later that I could have gone to see the Tacoma Narrows Bridge, where the original had once stood, and had been so famously and spectacularly destroyed in steady winds in 1940. See the amazing video clip below:

Eventually we made it to Heather’s friends’ house in the northern suburbs of Seattle just as it started to snow. During the evening I met three generations of the family, grandma Gail, parents Jeff and Jenny, and three daughters, Warner, Whitney and Willow, aged 9, 7 and 4, and who were much more conveniently referred to as W1, W2 and W3. We played games, and my moment of glory was when W2 and I won the domino trains game. Gail and I were thoroughly humiliated though at a memory game by the sharp kids’ team.

I also met the family dog Scout, who I could see was quite old, and very friendly. I asked him to sit, which he did slowly, and I felt very guilty when I was told that he has arthritic hips, and nobody makes him sit anymore as it is so painful for him. Ooops! Sorry Scout.

The next day Heather showed me around Seattle, and we admired the view of the beautiful Puget Sound and the mountains in the distance from the Space Needle high above the city. After a swift lunch of clam chowder, a local speciality, we went to look around Pike Place Market, famous for the fun fish merchants working there who throw fish around, and get the crowd involved as often as they can. I have read a book about this place, and was fascinated to see it in real life.

We had to leave before it got too late, and I dropped Heather off at the airport to fly back to Chicago, and started to head the RV towards the local Walmart carpark.

It was getting pretty cold and icy, and I parked up as soon as I could before it got any worse. Dear me, it is all a very sudden change from the beautiful summery weather I was enjoying in LA just a week and a half ago. And it’s only going to get colder as I head further north, I suspect. 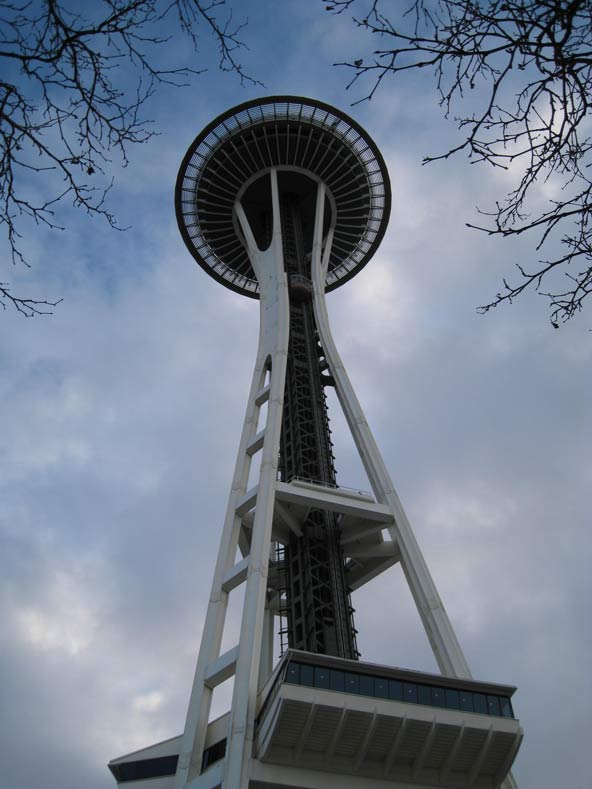