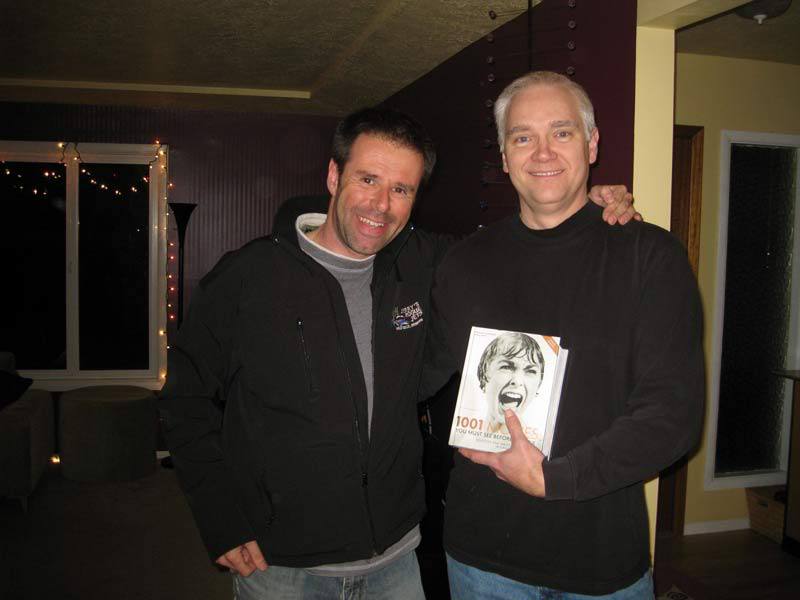 Back in June I ran a competition prior to the “ALife4Sale” auction, just for a bit of fun. I had made a short video to show my home theatre system in it’s best light, and asked people to name the movies, video game and concert shown in the clip. You can see the video clip, the answers and results here.

The winner, David, lives with his family in Portland in Oregon, and had invited me to visit. Heading north from Gold Beach would take me directly through the city. Unfortunately, after an early start, the alternator on the RV, after squeaking continuously for the last two thousand miles went ominously quiet, and the battery indicator on the dashboard showed that there may be trouble ahead!

I found an auto repair shop at the next town, and without daring to turn the engine off, had them put a meter on the alternator, and discovered that it was still putting out a little charge, probably enough to keep the vehicle running, but not enough to recharge the battery. I decided to push on and try to resolve the issue in Portland.

I made good time for the rest of the trip, and arrived at David’s house without further incident. I left the RV running, explaining my predicament, and we looked in the local Yellow Pages for a repair shop. I took it to Keith’s Autos, and after a few sharp intakes of breath, and a lot of head shaking, a meter pronounced the alternator dead. Keith was left with the RV, and a request for a speedy repair, and David and I returned home for dinner.

I met his wife Lisa, and their two fantastic kids Ian and Amy, and for the rest of the evening we played ten-pin bowling on the Nintendo Wii. I was proud to win the first two games against the kids – they were both very good – but I became complacent, and was soundly thrashed in the last game.

After the kids went to bed, Marc Acito, another friend of David’s turned up at the house. David had thought we would be interested in meeting, as Marc is about my age, and is in the final stages of his very own mid-life-crisis project, which is quite similar to my own. He is almost at the end of doing a new thing every day for a year. You can see his blog here:
http://marcacito.blogspot.com/

David had very kindly taken the next day off work to entertain me, and had booked a couple of exciting things for us to do. In the morning we went for breakfast with Lisa, and then to a poi-twirling lesson. Poi are pair of balls on the end of strings which are held one in each hand, and twirled in some amazing patterns. Well, that is the theory, but David and I struggled to master the dexterity needed to handle them effectively. With some patient teaching though we did improve, and thoroughly enjoyed ourselves.

After a quick bite to eat we headed down to the local radio station to meet up with Marc again, where he features on one of the local shows on a regular basis. I sat down in the studio, put some headphones on, and chatted away with Marc and the show hosts. It was great fun, and reminded me of the cray days when “ALife4Sale” meant I was interviewed regularly by radio stations, as I enjoyed my 15 minutes of fame!

We dashed out of the radio station as soon as we were finished, and Marc, David and I headed into town for the “Portland Underground” tour. Portland has a fascinating history, and at one time had an extensive system of tunnels underneath the city, connecting most of the downtown buildings with the waterfront. The tunnels have seen many uses, including opium dens, illegal drinking establishments during prohibition, prostitution, and even white-slave trading.

But their most infamous use was for an even more ominous trade. It was from these tunnels that many men were “Shang-Haied”, simply disappearing from the world above, finding themselves as unwilling crew members aboard ships bound for the Orient and beyond.

The tour was fascinating, and I was astounded to find that the illegal practices, which started around 1850 in Portland, had continued until as recently as 1941. I would highly recommend the tour for anyone visiting Portland.

I was very proud to be mentioned by Marc in his blog for day 351 of his year, for which seeing the Portland Underground was his new thing for the day. Read about it here.

Not long to go now Marc, keep up the good work! Thanks to David and family for being such fantastic Portland hosts, and going well beyond what is ever expected from a competition winner!