What an evening! I am quite drained by my time at the poker table tonight. This evening’s game certainly took me well outside of my comfort zone. After a lazy afternoon by the pool I took the 4.30pm shuttle into town, and made my way to my chosen game at The Wynn.

The walk from the shuttle stop was a nervous one, as the money I had chosen to play with, although not absolutely devastating if it did all go, was certainly a sum that would be uncomfortable to lose. But most of my poker experience is in very cheap tournaments, and I didn’t really know what to expect of a bigger cash game. So with some trepidation, I put my name on the list for a seat at a table. My choice was a Texas No Limit Hold ‘Em $2/$5 cash table, without an upper limit, so I could “invest” a sum of $1,000. I had to wait nervously for a while for a seat, and eventually sat down to play just before 6pm. 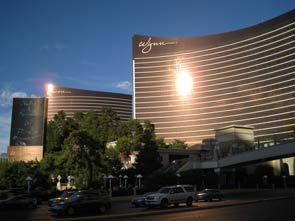 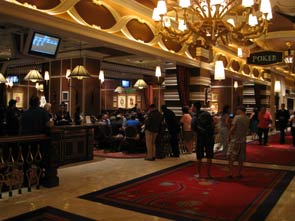 I surprised myself a little by playing fairly aggressively with the first couple of hands, when I received some decent cards, but lost both of the hands I got involved in pretty quickly, and was down by about $300 within the first ten minutes. I settled down though, and decided not to let the early setback get to me, and half an hour later won a pretty good hand, bringing me almost back to my starting point.

From then on I played fairly steady, winning a few, and losing a few, but my chips slowly dwindled. At one point the crunch came, and a young Australian guy across the table from me with a huge stack of chips went “All In”, and after a brief hesitation I called him, reasonably confident with a ten in my hand to go with the two other tens on the board. The other guy had the fourth ten, and we split the pot, both profiting fairly well from other players bets.

I felt that was the moment when my goal was achieved, as the last of my money had been at risk, and felt pretty proud to be still in the game.

I ended up down by the time I had to leave, having lost over half of my stack, and when I cashed in, I collected over $400, just less than half of what I started with. However, I am generally a “glass-half-full” type of guy, and in this case, I reckoned anything that I came away with was a bonus.

It is pretty clear to me now that I am no poker genius, and at tonight’s table there were guys that had a much better idea of what they were doing than I did. Others can see things that I simply miss, or discuss finer points of betting strategies that I only half understand. I certainly have no mis-conceptions about winning the World Series any time soon. However, I did have a fantastic time, and I know I will be taking part in many more, but less costly, games. I am glad to have experienced the excitement of a game at this level though, and do think that I got great value for money in terms of thrill and experience.

After I cashed my remaining chips in, I tried to find my way out to the street, but got completely lost in the huge place. These casinos are deliberately designed to let you find your way in, but make it very difficult to ever find an exit, I am sure! Eventually, with a little help I found my way out, and just made it to the Riviera in time for the last shuttle back to Sam’s Town. If I had missed it, the taxi fare would have made serious inroads into the remnants of my capital!

I arrived back at Sam’s town, and went into the casino there to grab a beer, but somehow found myself at the poker room, wondering how much the 11pm poker tournament might cost me! “What are you thinking?” I asked myself. “Quit while you’re ahead – well, not ahead – but at least while you are no further behind than you need to be!” I really didn’t think the $50 entry fee would be a good investment, and in the end I think I made a great value-call by investing a further $3 in three more beers and heading back to my RV to watch a movie.

So cool to see your Poker adventure here in Vegas! I know all those feeling you described… It took me a long time to get comfortable with risking the money, with competing with others in the game, and with overcoming not feeling adequate enough to beat others at the table. But poker is a game I LOVE.. and it sounds like you got a new view of the game. Continue to play! Vegas is always open!!!