A speedy and exhilarating, but quite nerve-wracking ride on the back of a moped taxi through the Bangkok morning rush hour traffic got me to the train station in about twenty minutes flat, a journey that may have taken around an hour in a taxi cab. The 2-car train rattled slowly eastwards for around seven hours, and I got off at Surin with quite a few other fellow travellers to be greeted by several elephants and their handlers waiting at the station entrance.

I wanted to linger a while, but also knew that I should secure a hotel room as soon as possible, as the town’s accomodation fills fast in the build up to the weekend’s festivities. I had met Joy on the train, a veteran visitor to the Elephant Round Up, this being her fourth time, and she suggested I try The New Hotel first, right by the railway station. As I passed the elephants, one reached it’s trunk out, and I patted it – the first time I have ever touched an elephant.

I managed to get a room without trouble, in the mis-named establishment. It has been many years since this place could have been called new! However, even when the price per night doubles for the festival weekend, the cost of my room only becomes around $10 per night. Marvellous.

Joy gave me directions to the wonderfully vibrant street market, and I dumped my bag and went for a spicy dinner, chosen from the vast array of tempting and mysterious foods on offer. After a quick chat with a few other regular Round Up veterans, I decided to have an early night, as I had discovered that there is a dress rehersal for the weekend’s big elephant shows first thing in the morning at the stadium. It is not advertised, but you can go along and watch if you want.

I was up early and bought some breakfast (fresh pineapple) at one of the street vendor’s carts, and then walked to the elephant stadium. I found a good spot at the front just before the start of the rehersal. The place was packed with school groups and hundreds of other elephant enthusiasts.

The show was pretty spectacular, but the best moment by far was when all the elephants filled the stadium field at the same time, approximately 250 elephants streaming into the centre of the football-pitch-sized arena from all four corners, circling around in the middle, then all sitting down. It was quite breath-taking. 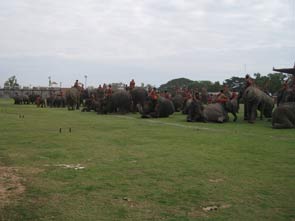 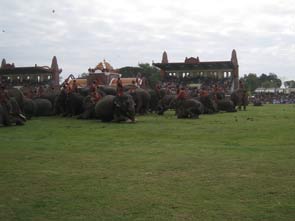 I watched entranced as elephants played football, threw darts, painted and twirled hula-hoops, and one elephant easily beat a group of 30 volunteers in a tug-of-war. After the show rehersal I wandered the streets, fascinated by scenes of elephants wandering around in the busy city traffic. I took a walk past the Elephant Buffet Breakfast site, which is scheduled for tomorrow morning, and was amazed at the staggering amount of food being prepared. I guess 250 hungry elephants can get through a lot of fruit.

After lunch, back at the hotel by the railway station, I made a start on this blog, but was interrupted by elephant trumpeting just outside my window. I went out to investigate, and grabbed a bag of sugar cane from one of the mahoots (elephant handlers) and fed an elephant. It really is incredible to be able to wander around freely with these huge creatures, and to have it nudge you with it’s trunk for another piece of food, which it delicately takes from your hand. What an experience.

Check out the video from today’s pachyderm practice event: