We had two new arrivals at the apartment yesterday, when Mike’s friends Muna and Carmen arrived in the morning, taking the occupancy total up to an impressive nine, although Kurtiss was scheduled to leave later in the day, bound for Barcelona and then home to San Diego. He had tried to leave a couple of days earlier, but he and Mike had only managed to get as far as the first bar, and Kurtiss had given up on the idea of the flight he had booked, and stayed for a few more days. He was determined to escape today.

Muna and Carmen had brought a couple of bottles of duty free, and before long shots of Jack Daniels were being handed round. I managed to stay sober enough to wander off to the square near our apartment, where there is wi-fi access, and tried to sort out my own onward travel plans, which are as yet unconfirmed. I am trying to arrange another goal while here in Spain, but things are still in the balance. More to follow, if things work out as I hope.

As the day progressed, most of the household tried to stay relatively sober, as both Mike and Willy were keen to run in the morning, and the rest of us were keen to go back to the bull ring to watch the morning entertainment again. Apparently though, we didn’t quite manage to stay sober enough, as when Ivy, who would be the only person out of the original group who didn’t run, suggested that she might do it, we were all impressed. So much so that Fipps, Nick and myself offered to do it again with her if she decided to do so.

And at decision time at 6.30am, Ivy decided we were going to join the run. I emptied phone and money from my pockets, and wondered what on earth I was thinking! Was I really going to go back and do this again?

We walked down to the town hall square again, and were onto the run streets by 7am. Mike and Willy, along with Muna and Carmen, headed off down towards the steep early section of the run, which is the fastest part, just after the bulls come out of the holding pen. We headed in the other direction, around Dead Man’s Curve, and picked a spot against the wall that would hopefully be off the main track of the bulls, and yet offer a great view as the bulls came sweeping wide around the corner.

The plan was to have as safe a morning as possible, stay up against the wall with a buffer zone of other people in front of us, watch the bulls and faster runners go past, and then join the stragglers in relative calmness.

After picking our spot we headed back towards the town hall square, to avoid being swept out of the main street by the police when the final cleaning took place. As we waited, packed in, tension mounted, and Fipps started to feel very ill. His eyes were swollen and red, and his lips were swelling, and he thought he was having an allergic reaction to something he had eaten. His wise decision to to pull out while he still could, and when we met him back at home later, he was pleased he did. Anti-histamines that one of the others had at home had slowly fixed him.

So that left Nick and myself, along with Ivy. At around ten to eight we were released back into the main street, and we went to take up our chosen position. Again tension cranked up another notch, and at last the first and second rockets went off, and the bulls were on their way.

People streamed around the corner faster and faster, and a couple of people squeezed up in front of us, but I still had an incredible view as the bulls thundered around the corner against the opposite wall. Quite a few people went down among the bulls, and the corner was quite chaotic, but the bulls passed through cleanly and were gone. We waited a few more seconds for the chaos to die down a bit, and joined the runners, who were still streaming past.

Further along the run, we approached the closed gate across the main street, about two thirds of the way along. The gate is to prevent any bulls turning around and returning back along the run, which would be devastating. But as we drew closer there was shouting and excitement, as three of the massive, but relatively docile steers were herded along, approaching us from behind. As they approached the still closed gate, now hidden by hoards of runners who hadn’t been quick enough to get through, panic broke out, and people ran in every direction as the steers reached the back of the crowd. We managed to avoid most of the trouble, as we were still a little way back, and eventually the gate opened, and order was quickly restored.

Another successful and, for all of our apartment group at least, injury-free morning. However, when we watched the re-runs on TV back at home, others had not been so lucky. The reason that the gate we were stuck behind had been closed for so long, was that one of the back-marker bulls had stopped, and turned around and gone pretty wild. Several people had come to grief, one guy being impressively tossed right over the bull’s head, and then the bull had turned around and continued to attack him while he lay on the ground. I am pretty sure he was okay, but he will have a few wounds, and some amazing video of his impressive tussle with the huge creature.

As soon as I can find one, I will post a link to the Spanish network TV footage of this morning, it is quite incredible. And if you are very sharp-eyed, you can just catch a glimpse of Nick and myself on there!

Ah-ha! Found the Spanish TV website RTVE, which already has today’s video online. Take a look at this craziness:
http://www.rtve.es/noticias/sanfermines/2009/videos/
There will be a new lead video tomorrow after tomorrow’s run, of course, but all the runs, including today’s (10th July, fourth bull run 2009) will still be viewable there, I imagine.

Thanks to Nick and Ivy for causing me to do this again! Once again what a fantastically terrifying and thrilling experience. Never again? Well, who knows? I don’t any more – I can see that this could be very addictive. You can add a knot for each run you have done to tassles of the red sash that you wear as part of your San Fermin outfit, and mine now proudly sports two. Apparently there are some regular runners with sashes that have so many knots that they can’t fit any more on there! 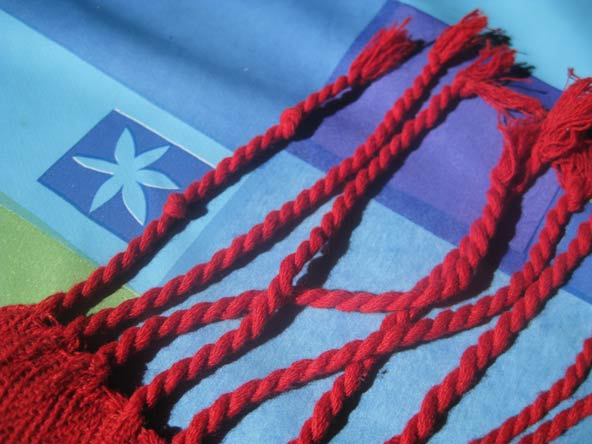 Congratulations all round this morning to my flatmates. Thanks again to you all for sharing this whole amazing week with me.

Sad footnote: Unfortunately there was a death during this morning’s run. “Daniel Jimeno, a 27 year-old Spaniard, was gored in the neck after one of the bulls veered into a group of runners, a Navarre regional government official told reporters.” say Reuters. The occurence is more sensationally reported in UK newspaper The Sun. This is the first death for fifteen years by goring. The incident, which happened towards the end of the run, has been reported and shown many times already on Spanish TV, and is hardly even noticable on the video. It really does bring home the true nature of the dangers involved in this crazy event.