After yesterday’s unfortunate events during the Encierro, as the the bull run is called here, enthusiasm among our group for running again was somewhat reduced. The TV had been showing endless re-runs all day of the carnage, and by this morning had aquired video from a spectator showing the fatal moment when the bull named Capuchino gored the unfortunate Daniel Jimeno.

Mike had managed to arrange spots for five people on Michael’s balcony, where I had watched the first day’s Encierro, so a few of the group elected to go to the bull ring, amd a few of us headed for Michael’s apartment, through the piles of debris left over from the night’s partying hoards. 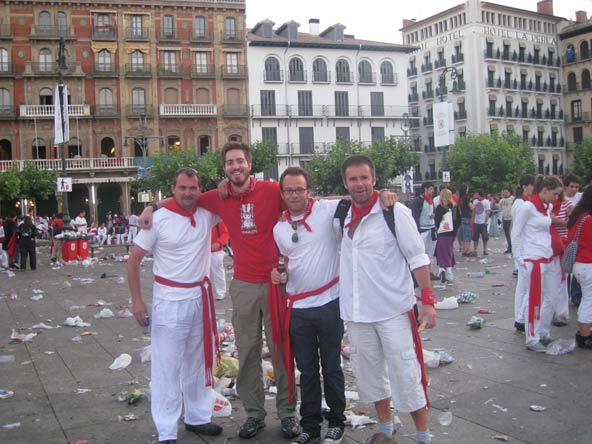 Only Carmen decided to run again, and we wished him well. After the bull run streets were cleared of the night’s revellers, and swept clean once more, we spotted Carmen below, looking tense, but ready for action. I hope he did okay.

Five minutes before the start, Mike and I gave some thought to going downstairs, out the front door, and joining the run again? What is it that somehow makes it seem so attractive, even after yesterdays horrific turn of events? Fortunately common sense ruled the day, and I don’t think either of us was really all that keen, but I also think that neither of us would have backed out if the other had decided to go downstairs.

We watched on the TV as the first rockets went off, and the bulls charged out of the pen and up the hill. We followed their progress up to and through the town hall square, and then onward and around Dead Man’s Curve, then we all dashed across to the balcony. Once again it was extraordinary to see the running masses below, as the bulls thundered along Estafeta, and through the parting crowd of people.

It seemed to be a pretty quick and clean run, and the bulls had only been slightly separated over the 825 metre length of the Encierro. However, within minutes the TV was showing highlights of the run, and there were a few nasty moments, with one guy in particular taking a bit of rough treatment from one of the trailing bulls, and ending up on a stretcher with a drip in his arm.

Another spectacular piece of footage showed a runner in a blue t-shirt, just after Dead Man’s Curve, who managed to squeeze into a shallow doorway just as the one of the bull’s horns ran along the wall where he had been a second ago. He shrank back as far as he could, and the tip of the horn just touched the front of his t-shirt. What an incredibly lucky escape!

I had packed my back and taken it with me to the apartment, as I had booked a bus ticket to Madrid a couple of days earlier, and I had to be at the bus station before 9 o’clock. Fond farewells were said all round, with promises to catch up again in San Diego or LA, and I headed downstairs.

The party was in full swing again already in the streets, and I made my way through the night’s debris. I am both glad and sad to be leaving Pamplona. I am glad simply because I don’t think I could maintain the same pace for much longer. It has been a week-long, almost non-stop party, although I have tried to be reasonably restrained, held back a little by thinning personal Euro-finances! But I am sad to, as I have had one of the most incredible weeks of my life. I have never seen partying and craziness on such a scale before, and over such an extended period.

I am also sad to say goodbye to some great friends that I have made here. Once again, I can’t thank you all enough for welcoming me into your group, and allowing me to experience the week with you all. Grathias! 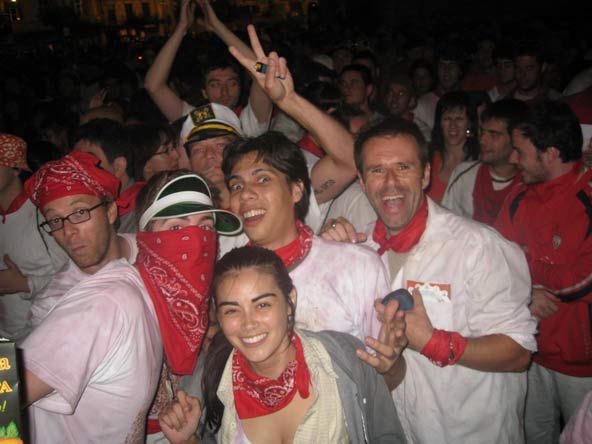