I love Kuala Lumpur. It is a wonderful mixture of spectacular modern splendour and manic Asian chaos.

I haven’t been here since I first started travelling between England and Australia fairly regularly towards the end of the nineties. I think the last time I spent some time here would be heading back home to England in 2000 after seeing in the new millennium in Sydney (and being slightly disappointed that the Millennium Bug was such a let-down!)

It feels quite familiar to be wandering around here again, and I recognise quite a lot of the places from my previous visits.

I flew in from Taipei, arriving early yesterday afternoon, and caught the bus from the airport, and walked to the hostel I had booked for the night, and dropped my bags off there. I thought the best plan would be to go out, keep moving, and get a reasonably early night, in the hopes of minimising the jetlag issues.

Just around the corner from the hostel I found exactly the type of place I was looking for, and ordered lunch consisting of roti and tea.

Roti has to be one of my favourite foods. It is a sort of bread, the dough being rolled out really flat, then folded so air is trapped, then cooked on a hot plate. Served with a curry sauce and a cup of sweet tea, it is lovely. The cost for two of these and the tea, 3.20 Ringgit, or just less than $1. 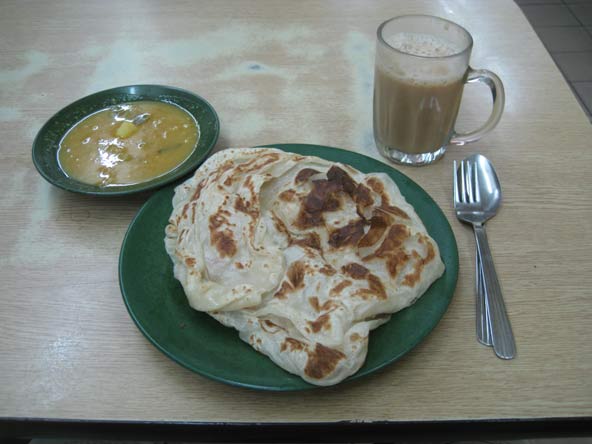 I wandered the busy, chaotic streets and markets. As in many Asian places, the pester factor is fairly high, but good-humoured and reasonably easy to fend off. Eventually I found myself drawn to the skyline-dominating twin spires of the Petronas Towers, and was amazed to find that you can now take a tour over the bridge that connects the two towers. The price? Free!

Apparently people get up early and line up for tickets, which all go pretty quickly in the morning. However, I just wandered up to the counter at around 6pm for further info, and was happily waved in along with some other lucky latecomers. The view of the city is pretty spectacular, even if from less than halfway up the 452m high building.

I had dinner in another little restaurant filled with locals, and was surprised at the expensive-sounding bill. 7.20 Ringgit. Then I realised that my huge buffet plate of various curries, along with the obligatory sweet tea, had cost me just over $2. It’s funny how quickly your perception of price and value gets skewed when you travel in cheaper parts of the world. Changing $40 into local currency makes you feel like a rich man here!

This morning I was awake at 5am, having managed a decent 7 hours of sleep. I did a bit of internet research, as I am considering a possible change of plan for December and January. At a more reasonable hour I got up and went for breakfast (roti and tea, of course) and then made my way to the spectacular KL Tower.

When I last visited here the view was pretty cloudy, and the top of the Petronas Tower was hidden in the mists, so I wanted to go fairly early before the day clouded over in the afternoon.

What a view! I’ve seen quite a few BASE jump videos filmed here. Check out the video here for an example of this sort of craziness:
BaseDreams.com

It makes your stomach a bit queasy to look down and think how it would be to jump from that sort of height!

Kuala Lumpur – what an interesting city! I’m glad I got the chance to stop over here and experience this place again. Onward to Beijing in China this evening! It’s non-stop travel at the moment. 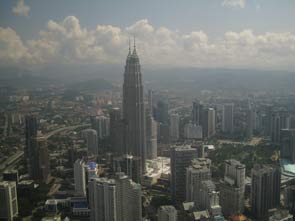 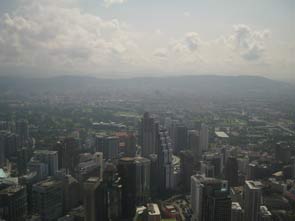