Day One in Beijing.

I have just woken up from one of the longest sleeps I think I have ever had. I slept a wonderfully rejuvinating 14 hours last night!!

My last day in Kuala Lumpur was pretty long. After going to see the KL Tower in the morning I had to check out of my room at midday. However, I managed to store my bags at the hostel for the rest of the day, and was able to sit around in the lounge there too. I spent some more time wandering the city, and at around 8pm collected my bags and caught the bus to the airport.

I had booked my cheap return to Beijing with budget airline AirAsia, who fly out of a different terminal, and arrived in plenty of time to check in for my 1am departure. However, foggy conditions in Tianjin, the destination airport near Beijing meant our flight was delayed until 3am. The seats in the waiting area were not at all comfortable – not much sleep to be had there.

Eventually we arrived at Tianjin at 9am, and I caught the shuttle to the main railway station, and at a small cafe nearby tried to figure out what I could have for breakfast. I am finding it similar to my visit to Japan here, as the Chinese writing is a complete mystery, and very few places have English translations. In the end, I opted for pointing at a picture of a tasty looking dish above the counter, and received a bowl of watery noodles with two fried eggs on top!

The train to Beijing is a marvel of modern technology, a non-stop luxury journey of half an hour at speeds up to 350 kph. At Beijing South Railway Station I found the subway easily, as signs are in English here too, and got on the correct train. However, I got off at the wrong stop, and my walk to the hostel I had booked bore no relevance to the map I had copied from the internet. In the end I gave up and caught a taxi, which cost me 13 yuan, or around $2.

Lancy lives in Beijing, and a while ago had been given an assignment by her English teacher to summarise an article about some crazy guy in Australia who had put his whole life up for sale on eBay! (Her words, not mine!) She had followed my adventures from there onto my 100 goals adventure, and had emailed me to offer to help me out in Beijing.

She and her friend Jenny were waiting for me at the hostel, and after dumping my bags we headed out for a wander around the local area. They took me around an area called Nan Luo Gu Xiang, where the narrow streets, or hutongs, were filled with locals, and quite a few tourists too. We ate all sorts of interesting foods from shop windows and street carts – spicy tofu pieces, sweet cakes, pork-filled dumplings, strange soups and hot sweet potatoes.

My first impressions of Beijing? It’s cold here after coming from Malaysia. Temperature in the afternoon was around 12 deg C, but it drops to near freezing in the evening. It is a busy place, and apparently it gets busier, as Sunday afternoon is relatively quiet. It is, like Kuala Lumpur, a fascinating mixture of sleek modern and old traditional. Interesting sights, such as people playing chess or mah jong at street cafes. Strange and unusual foods.

I wandered happily soaking it all up and chatting with Lancy and Jenny, who were wonderful hosts. At times I would feel my head swim a little with tiredness, but it was all too new and exciting to miss out on. At one point I was suddenly hit by the realisation that I was in Beijing in China!! That happens to me every now and then as I travel, and sometimes am struck by exactly where I am or what I am doing.

Later in the evening the girls dropped me off at home again. It still amazes me how quickly I now start to refer to a new place as home, even though I had spent only a few minutes there. Wherever I lay my hat… The girls went to catch their bus, and after quickly checking my email, ten minutes later I was fast asleep on my bed!

Thanks to my wonderful guides, what a great introduction to this fascinating city. 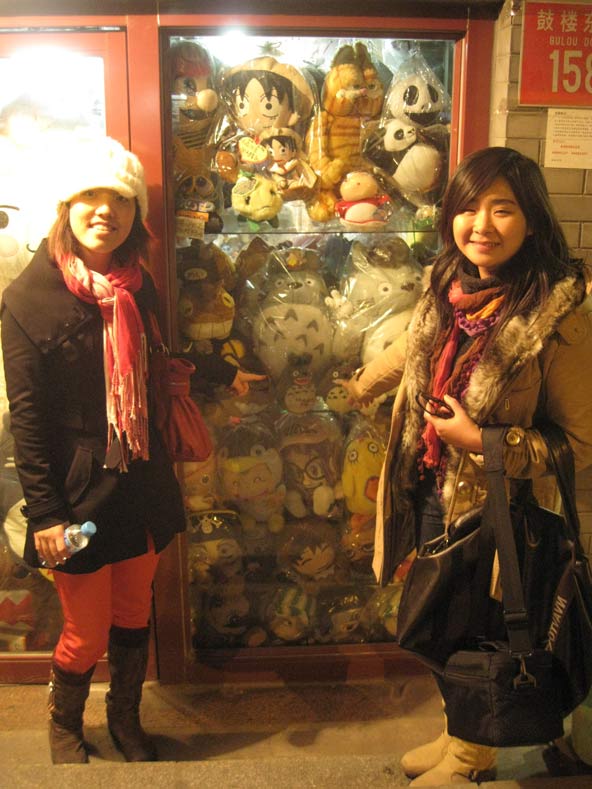