Before our second day out in the Uluru-Kata Tjuta National Park, both Ces and I succumbed to the lure of the fly nets that were on sale at the campground reception. The flies in the outback can be very persistant, and by the end of the previous day’s walk around the base of Uluru, we were pretty tired of them trying to get in our eyes and up our noses.

Many other tourists had nets which go over the hat and head, and keep the flies of the face, and despite Pam’s mockery of us, we thought our extremely over-priced purchases represented excellent value for money!

I was up early to see if the climb to the top of Uluru was open, but after driving there again before dawn, found that the wind was too strong once more, so went to watch the sunrise with the rock as a spectacular backdrop. 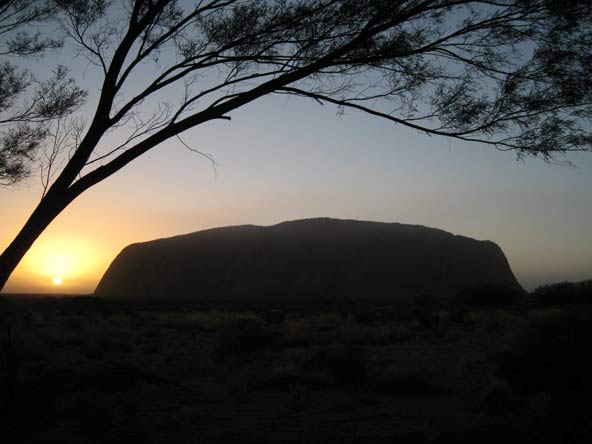 Later that morning we drove about 50 kilometres into the park to Kata Tjuta, also known as “The Olgas”, so named by Ernest Giles in 1872 in honour of Queen Olga of Wurttemberg.

Kata Tjuta, meaning “many heads”, consists of 36 steep-sided domes, and the Valley Of The Winds walk winds spectacularly through this beautiful landscape. The climb through the gap between two of the domes reveals a wonderful valley, in which it really isn’t too hard to imagine dinosaurs roaming around.

I am glad to report that the fly net was invaluable, and I think, despite her mocking, Pam was very jealous.
(Yes, that is a wild camel in the bush in the fly net picture.)

That afternoon we snuck into the luxurious Sails Resort Hotel, where we lounged around the sparkling pool drinking beer and relaxing for the rest of the day – this outback camping lifestyle can be pretty comfortable sometimes when done properly!

Hi Ian
I have been reading your blogs since their beginning. I am originally from Poland and today on the Polish Internet they wrote about you at last! Agnieszka