I have been attending a didgeridoo, or yidaki (see below) class at Didgeridoo Breath in Fremantle, and over the past few weeks have progressed fairly well under the expert guidance of Levi, the didge teacher there. In the first lesson I managed to get the feel of the technique of “circular breathing”, which means that a continuous note or rhythm can be played without having to stop to refill the lungs.

I have practiced as regularly as possible over the last few weeks, and can manage a couple of decent-sounding rhythms, and really enjoy playing. The practice didge is merely a piece of plastic plumbing pipe, but sounds pretty good. However, after the lessons a few of us would try out some of the didges in the shop, and when you find one that suits you, the sound is rich and deep and awesome. One day I might treat myself to one of these top-quality didges, but in the meantime, I decided to buy myself a cheap didge that I planned to bring out to Uluru with me.

I feel that to class my didgeridoo goal as complete I needed to come and play it out in the Australian wilderness, and thought that Uluru would be the ideal place to do so. Unfortunately, I discovered that the didgeridoo is originally only from Arnhem Land in the far north of Australia, and only spread to the central area about 150 years ago.

Regardless, it still felt pretty special to climb up to the top of a sand dune just before dawn yesterday morning, and sit playing my current favourite rhythm, with the magnificent Uluru filling the view in front of me, just to the right of the slowly rising sun.

There wasn’t another soul around, and it was a wonderfully peaceful and relaxing way to achieve my 40th goal. 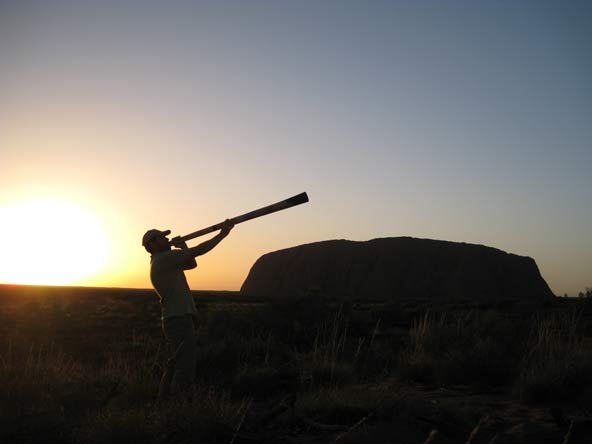 The didgeridoo (also known as a didjeridu or didge) is a wind instrument of the Aborigines of northern Australia. It is sometimes described as a natural wooden trumpet or “drone pipe”. Musicologists classify it as an aerophone. The instrument is traditionally made from living Eucalyptus trees, which have had their interiors hollowed out by termites. Contrary to popular belief, logs are not stuck into termite mounds for the termites to do the hollowing. Crafters would find suitable trees by knocking on the bark to see if it was hollow.

A modern didgeridoo is usually cylindrical or conical in shape and can measure anywhere from 1 to 3 m (3.2 ft to 9.8 ft) in length with most instruments measuring around 1.2 metres (3.9 ft). The length is directly related to the 1/2 sound wavelength of the keynote. Generally, the longer the instrument, the lower the pitch or key of the instrument. Keys from D to F# are the preferred pitch of traditional Aboriginal players.

There are no reliable sources stating the didgeridoo’s exact age, though it is commonly claimed to be the world’s oldest wind instrument. Archaeological studies of rock art in Northern Australia suggests that the Aboriginal people of the Kakadu region of the Northern Territory have been using the didgeridoo for about 1500 years, based on the dating of paintings on cave walls and shelters from this period. A clear rock painting in Ginga Wardelirrhmeng from the freshwater period (1500 years ago until the present) shows a didgeridoo player and two songmen. In some Aboriginal cultures, only men are permitted to play it, whereas women can only use clapsticks.

“Didgeridoo” is considered to be an onomatopoetic word of Western invention. It has also been suggested that it may be derived from the Irish words dúdaire or dúidire, meaning variously ‘trumpeter; constant smoker, puffer; long-necked person, eavesdropper; hummer, crooner’ and dubh, meaning “black” (or duth, meaning “native”). However, this theory is not widely accepted.

The earliest occurrences of the word in print include a 1919 issue of Smith’s Weekly where it was referred to as an “infernal didjerry” which “produced but one sound – (phonic) didjerry, didjerry, didjerry and so on ad infinitum”, the 1919 Australian National Dictionary, The Bulletin in 1924 and the writings of Herbert Basedow in 1926. There are numerous names for this instrument among the Aboriginal people of northern Australia, with yirdaki one of the better known words in modern Western society. Yirdaki, also sometimes spelt yidaki, refers to the specific type of instrument made and used by the Yolngu people of north-east Arnhem Land. Many believe that it is a matter of etiquette to reserve tribal names for tribal instruments, though retailers and businesses have been quick to exploit these special names for generic tourist-oriented instruments.