Last night I was invited to Diana’s house for dinner, the second of the three Easter Island-based couchsurfers that I have met, and she made a fantastic spaghetti bolognese.

She is from Switzerland, and has been living on the island for a year and a half, working as an alternative healer. I met five of her Swiss friends who were visiting, as well as Annette, another couchsurfer staying there.

Annette is from New Zealand originally, but has lived and worked all over the world. She is right at the end of her own incredible journey, having just rode a motorcycle all the way from the tip of Alaska, down through Canada, USA, Central and South America. She made it to Tierra Del Fuego, and with the end of the momentous journey in sight, only 200 kilometres to go to the very tip of South America, remembers nothing more until she woke in hospital five days later.

She has a broken collarbone, and her crash-damaged bike is currently in a repair shop in Buenos Aires. She still has no idea what happened to her, and how she crashed the bike.

We found we had a lot in common, and spent the evening comparing travel experiences, injuries and adventures. We met the next morning for breakfast in a cafe, and Annette had decided to hire a car for her last day on the island, but needed me to act as her driver, as her shoulder isn’t up to the job.

By 11am we were in a Suzuki 4WD and heading out of town for Rano Raraku, a volcanic crater on the north-east side of the island, which was known by the original inhabitants as Rapa Nui, the navel of the world. The crater was used as a quarry, and it was here that many of the amazing stone heads, called moai, were originally quarried and carved, before being transported to their standing locations.

The place is absolutely extra-ordinary. There is a lake in the volcano crater, and dozens of wild horses roam around freely. On the inside slopes of the volcano crater, many moai stand looking westward. Some have fallen over, some are only half finished. We wandered around between them, marveling at the work involved to put them there.

On the outside of the crater there are many more heads, even bigger and more impressive. The whole place has a strange, slightly surreal feel about it, and we happily soaked up the atmosphere.

Not far away at the coast we stopped to look briefly at Ahu Tongariki, where there is an impressive, and much photographed line of fifteen heads standing silently side-by-side. It is quite breath-taking.

We followed the road all the way around the island, stopping at several other sites, including the spectacular Ahu Akiva, where another line of seven moai face directly towards where the sun sets at the equinoxes.

The whole island is steeped in history, and much mystery still surrounds the moai, and the reasons for building them. Read more about what is known of Rapa Nui’s unusual and fascinating history at Wikipedia.

We returned to town, and ate wonderful empanadas, a sort of huge pie filled with meat and cheese, and watched surfers on the popular surf break, and then it was time for Annette to pack her bags and I dropped her off at the airport.

Back at home I met Andres, and as promised he was ready to give me my first Spanish lesson, and we spent an hour or so working through numbers and colours, using pool balls as teaching aids.

Annette had only needed to hire the car for the minimum 8 hours, but for 5,000 Pesos more (about $10) the hire could be extended to 24 hours, so I had paid the extra, and have the car until tomorrow morning. Andres had some work to do, so headed up the hill out of town to watch sunset at the lovely high point at Orongo. Viewpoints here look down one side into a huge volcanic crater.

On the other side there is also a wonderful view westward over the sea to the two tiny islands offshore where clans would compete against each other in a dangerous “Birdman” competition.

This involved climbing down the steep cliffs, swimming out to the further of the two islands, getting a bird’s egg, and being first back to shore and up the cliffs with an unbroken egg. A representative of the winning clan would hold the powerful position of “Birdman” for the next year. 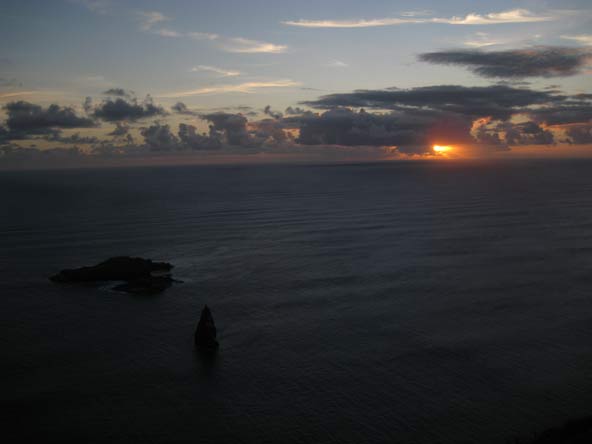 Just before I arrived on the island I downloaded and watched the 1994 Kevin Costner-produced movie “Rapa Nui” which wonderfully dramatises the making of the moai, and the birdman competition.

It is well worth watching, particularly for some historical context and the spectacular locations.

My thanks to Andres for kindly providing accommodation, bicycle, Spanish lessons and more, to Diana for a wonderful dinner. And of course, huge thanks to Annette for taking me along with her on her last day on the island, allowing me to achieve goal 74 with her.

What a wonderful day.

Andres has said that I can rent his scooter over the next few days, and I plan to be out as much as possible, exploring more of the interesting locations on this fascinating island.