Do you ride a bicycle? I’d like some feedback from you on a question I have, which I’ll come to shortly.

I have ridden bicycles since I was a kid, and have ridden motorcycles since I was 15. I’ve had my fair share of falls and scrapes, even breaking my collarbone in a spectacular cycle incident at the age of 12. And although I don’t consider myself any sort of cycling expert, I’ve always thought of myself as pretty capable on a bike.

And so yesterday, when I found myself off the bike and on the ground, sliding quite painfully and, I imagine, quite spectacularly through the gravel, I cursed myself for making a error so basic as using the front brake on a gravelly surface. How could I be so stupid? I knew better than to use the front brake, even in a quick automatic reaction when a car suddenly appears around the corner. I could ride better than that, couldn’t I?

I am starting to think that this type of photo of myself is becoming a little to common:- 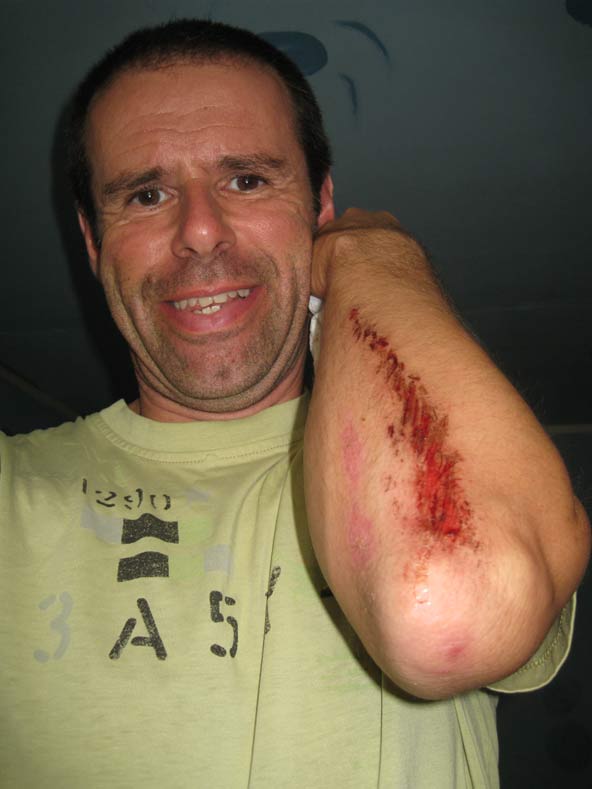 Andres, the couchsurfer I had heard from just before flying to the island, came to visit me at the hostel on my first day on the island, and that evening we went out for a couple of beers. He said I could move into his spare room the next day, and as I ate breakfast at the hostel yesterday morning, he dropped his bicycle off, which he said I was welcome use throughout the week if I wished.

It was quite a tricky ride from the hostel to his house with both of my rucsacs on, but I’m pretty good on a bike, I thought! I made it without incident. Later in the afternoon I decided to head up the hill to the south of town to one of the island’s interesting locations.

I was going quickly downhill towards the main road, and at the junction ahead, unwisely decided to cut the corner and try to keep my speed up. I was unlucky, and there was a car coming the other way. I hit the brakes. The front wheel locked instantly, and down I went at high speed, onto my left side, re-scraping the same arm injured in my fall off the ostrich, and hurting the same ribs again! I was winded but basically okay, and the concerned car driver was soon on his wayagain, after stopping to help me.

I abandoned my journey, and headed back to Andres’s house to painfully clean the gravel out of my wounds. I was cut, scraped bruised all over – left thigh, left hip, ribs, left shoulder, and right palm.

Later in the evening I was invited to Diana’s, another of the island’s couchsurfers, for a fantastic dinner, and decided to cycle there. I had a few glasses of wine with dinner, and made sure I took it pretty carefully, weaving my way home at midnight, but at one point had to brake approaching a junction.

“Wait a minute…” I thought to myself, “there’s someting odd here!” and I stopped to examine the bike, testing both brake levers. Now, every motorcycle I have been on, and I am pretty sure every bicycle I have had, had always had the fornt brake on the right. A motorcycle will of course have the clutch on the left, but a scooter or bicycle will have the back brake on the left.

As I examined the bike in the darkness my spirits soared. The front brake was on the left! When I had reacted automatically in the face of gravelly danger I had pulled the left lever pretty hard, and on most bikes this would have resulted in a controllable rear-wheel slide. But not on this bike! It had locked the front wheel and down I had gone! I was so pleased that I hadn’t made a stupid error. My only mistake was not to have realised earlier that the brakes were the other way round.

And so I ask you… Which side is your front brake on? Does anyone else ride a bike with the front brake on the left? Is this a common thing that I need to watch out for? Let me know! It might save me more pain in the future, particularly as I am considering a big mountain bike descent in the mountains of Peru. Thanks.