I still had Annette’s hire car the next morning, and deciding to make the most of it, got up at 6am and drove north-east in rainy darkness to see sunrise at Ahu Tangariki, on the east coast. Quite a few others had the same idea, so there were quite a few of us wandering around in the gathering dawn enjoying the atmospheric spectacle.

I had planned to go out later in the day on Andres’s scooter, but the rainy weather continued, and I decided to use the rest of the day to relax and unwind instead. I read my book, dozed a bit, watched a movie and read some more. I think I must have been pretty run down, as I ached a bit after my bike crash, and despite sleeping for a couple of hours during the day, after another Spanish lesson with Andres, I slept for ten hours!

I felt wonderful when I woke this morning, and headed out on the scooter to see more of the island. It was a great ride in the sun up to the north coast of the island. I took the scooter down some narrow, unmarked tracks, and enjoyed the rugged coastal scenery. It is all very wild and spectacular.

My main goal was to see Anakena, on of the island’s very few beaches, and another fascinating and picturesque moai site.

I also swam at the beach, as it was such a nice day. There was a decent surf rolling in, and I did a bit of body-surfing, but gave up when I lost my goggles – don’t want to lose my contact lenses too! 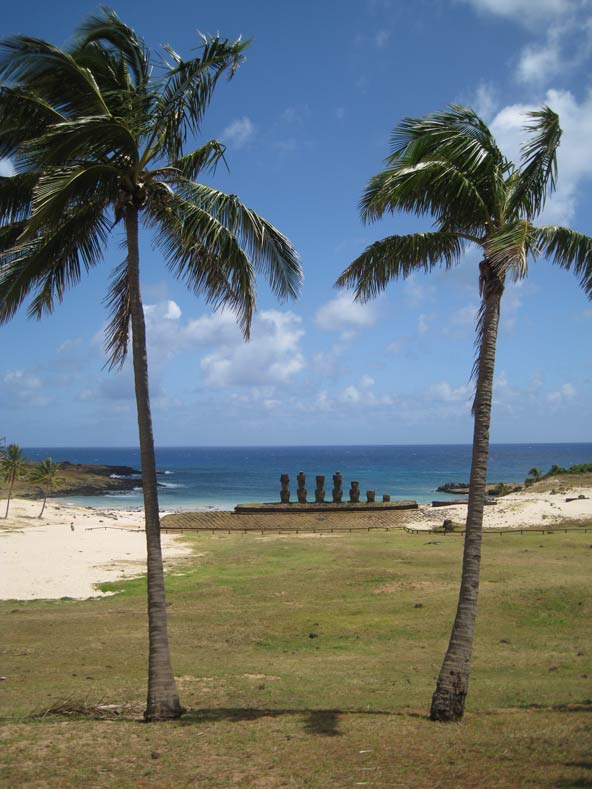 Ian, I am living vicariously through your adventure but never more than with your visit to Easter Island. It has been a long time goal of mine to visit this incredible place and your pictures help me picture what it looks like. Keep up the awesome journey! And thanks for letting me tag along.

Hi Deborah,
Glad to have you along for the journey, hope you're enjoying it so far. Easter Island really is a fantastic place, and well worth a visit when you can get here.
Hope you make it soon.
Best wishes,
Ian