The next morning we visited Drakenstein Correctional Centre, previously known as Victor Verster Prison, where twenty years ago, on 11th February 1990, Nelson Mandela took his long walk to freedom when he was released, after 27 years of incaceration in South Africa’s prison system.

It is a low security place, and looked more like a holiday camp with orange uniforms than anything else. Somehow we managed to talk our way in at the gatehouse, and ended up in the prison restaurant for breakfast, which was interesting and unusual.

There is a statue of Nelson Mandela at the gates, and I liked his words, printed on the plinth below:-

For to be free is not merely to cast off one’s chains, but to live in a way that respects and enhances the freedom of others.

The true test of our devotion to freedom is just beginning.

I have walked that long road to freedom. I have tried not to falter, I have made missteps along the way. But I have discovered the secret that after climbing a great hill, one only finds that there are many more hills to climb.

I have taken a moment here to rest, to steal a view of the glorious vista that surrounds me, to look back on the distance I have come. But I can rest only for a moment, for with freedom comes responsibilities, and I dare not linger, for my long walk is not yet ended.

We drove on into Franschhoek, which has a huge amount of wineries, and stopped at a few places to try some samples. It is so much like the wine areas around Perth in Australia, and if it wasn’t for the mountaunous backdrop, I could have believed I was back in the Swan Valley.

The southern coast is lovely, and we stopped at various towns and villages along our route to Hermanus, where we stayed at the backpacker hostel for the night. They were offering a great deal on shark cage dive excursions, which included a free night at the hostel, and a much cheaper tour than I had found anywhere else.

We were up at 5am the next morning, and drove to the “shark-central” town of Gansbaai, where we were relieved of our money by a surly shark dive leader. I never did find out his name, as he never introduced himself, and didn’t bother interacting enough, other than the swift financial transaction, for me to be interested enough to ask!

Down at the harbour our boat was lowered into the water, and we were off by 7am. At the shark site the worryingly small cage was prepared, and we got an overview of how the morning would work. The water clarity was poor, and the surly operator voiced doubts about whether we would see anything at all today. He wasn’t quite as vague on the “no refund” policy though!

However, we soon got a tantalising view of a shark on the surface as the blood-and-guts mix of chum was thrown into the water. The surly operator seemed slightly happier, as everyone had now seen a shark, and any chance of any sort of complaint, or refund request had been completely negated.

We quickly donned wetsuits, and I was swift enough to be second into the cage, soon followed by Martin. (Rachel had stayed ashore, already asleep again in the car before we had even boarded the boat, having been very clear about her complete lack of interest in seeing any sharks at all.) There was another shark which swam passed the cage, and I managed to get one gloomy picture.

We then waited for quite some time, as people got in and out of the cage. Some didn’t bother at all, a few only lasted a couple of minutes, as it was quite cold, but Martin and I remained in, determined to see more.

The next shark bashed right up against the cage, and as it’s tail thrashed right in front of me, the bottom part of it hit my wrist, and I bacame the only person on our trip to touch one of the sharks! You are not allowed to do so unless a fin or tail pokes throught the bars and you can’t avoid it!

The three pictures below are the best underwater pix I managed to get, which was a bit disappointing! Never mind though.

There were more sharks, or maybe it was the same one, I don’t know, as it was impossible to tell in the murky water, and an estimate from up on deck, where they could see them a bit better was that they were between two and a half to three and a half metres long.

Eventually I gave up on trying to get any sort of decent underwater picture, and enjoyed watching from surface level as a shark, attracted by the big fish-head on the yellow rope, swam past just a metre or two away.

It was a great experience to be in the water, right there with such magnificent creatures, but quite safe and secure. I was a little disappointed with the visibility, but of course that is the nature of any of these wild encounters, sometimes conditions are fantastic, sometimes not so good. It is always too easy too look at the amazing National Geographic/Discovery Channel pictures and videos of such encounters, and hope for something like that, but it is important to remember that they may have had to spend months or years to capture such amazing images.

I thoroughly enjoyed the cage experience, but in what is probably going to be my first negative review of pretty-much anything in my 100 weeks journey, I have to make some comments on the company we went out with. Unfortunately, I felt that were were treated merely as a revenue source by the uncommunicative, uninformative operator. For a company that sells itself as an “eco-tour operator”, there was not one word about the sharks’ habits or life. I would have liked to see some sort of video intro, a bit of shark natural history, and some talk about the huge mis-understandings, and some de-mystification of the fears that people generally have about sharks.

What did we get? Nothing!! “Everyone has seen a shark now, so there should be no question of a refund!”

My advice, if wanting to go shark diving, try an alternative operator to White Shark Ecoventures!! 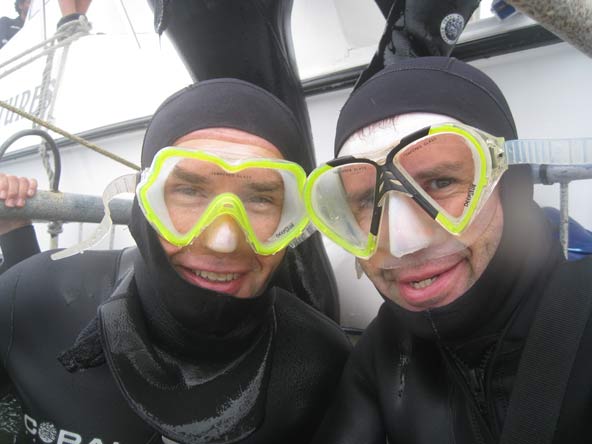