After the excitement of the shark cage dive we headed further east along the coast to the Garden Route, and stopped in a picturesque little town called Wilderness, where Martin and Rachel found a luxurious room, and I got a cheapie dorm bed at the backpacker hostel, which had a fantastic view along the coast.

The next day we took it easy, and played a round of golf, in which I was soundly thrashed by both Martin and Rach, and then spent another night in Wilderness.

A drive up into the spectacular mountains early on Saturday took us to the ostrich-farming town of Oudtshoorn (prounounced “oats-horn”) where at the huge Safari Ostrich Show Farm we met up with marketing manager Billy.

I had emailled a couple of ostrich (or volstruis in Afrikaans) farms, and Billy had replied, offering to help out with my ostrich-riding goal. He introduced me to ostrich handler Leon, and before long Martin and I were climbing aboard a huge male ostrich called Sarkozy for a couple of photos. 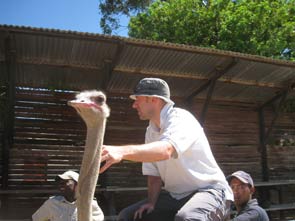 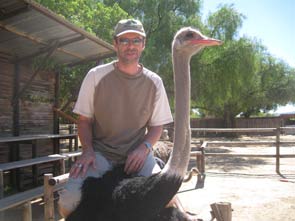 And then it was time for me to try to actually ride Sarkozy. The last time I was aboard an “ostrich”, it was much easier to handle, as I completed Goal 55 back in August last year, leaping from Worthing Pier in the annual Birdman competition.

This time the real thing was a lot more fiesty, and I climbed aboard, following Leons instructions. He had asked if I wanted the tame, tourist ride, where the ostrich handlers would support me, or if I wanted the “adventure ride”! I imagine you can guess what I picked – I should have maybe stuck with the tamer option, as the eventual, inevitable fall off was pretty painful! Check out the video below, which is accompanied by an awesome laugh-track from Leon. After my ride, there is an idea of how the professionals do it:

Afterwards we went on the farm tour, which was very interesting. They really are quite incredible birds. The whole set up is very professional, and the tour we took was the sort of thing I had expected from the shark dive operator too.

We saw video of the hatchery where the eggs are incubated, and then saw chicks in the paddocks, and several different types of ostriches from different areas of Africa – all very educational and informative. After photos and rides for some of our tour group, the grand finale, the spectacular ostrich race, was brilliant.

The final picture below was taken in the local supermarket – I don’t imagine there are too many places in the world where you can buy ostrich eggs right alongside the hens eggs!

What a fantastic fun goal to achieve. Huge thanks to Billy from the Safari Ostrich Show Farm for making this possible. And thanks also to Martin and Rachel for getting us there, their immense patience for driving me all over South Africa, and for joining in with yet another goal.

This completes the final goal of the five extra goals added by people voting on what they thought I should add to the list of 95 goals I had come up with for my 100 weeks adventure.