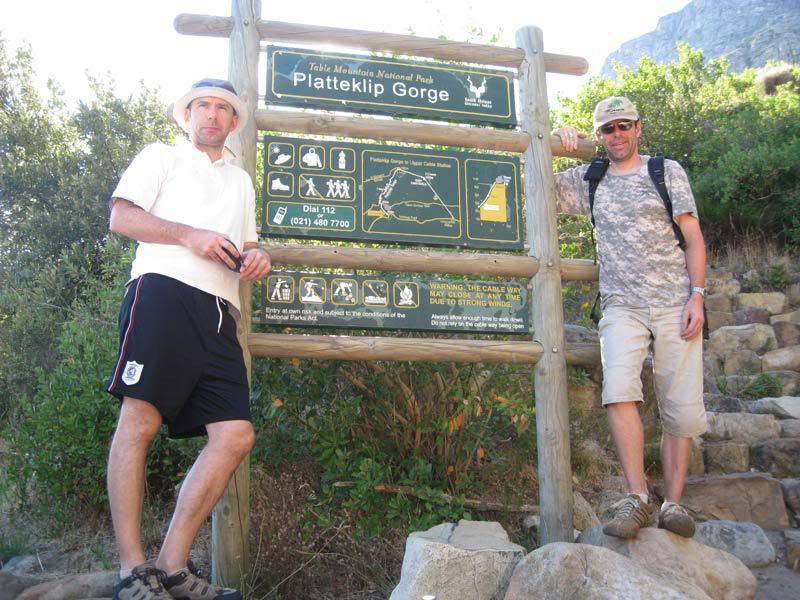 I was up early, bags packed, ready and waiting by the time Martin and Rachel arrived at the youth hostel, and we headed straight for the bottom of Table Mountain. Rachel dropped martin and I at the start of the Platteklip Gorge route, and then went for a drive, planning to take the cable car to the top later on to meet us there.

We had hoped that an early start would avoid the heat predicted for the day, but I don’t think we were early enough! The climb was steep, without much protection from the bright sun, but we had plenty of water, and progressed steadily, and after a final scramble up a short steeper section made it to the top in good time.

The views of Cape Town spread out far below us were magnificent, and well worth the effort. We met with Rachel as planned as she arrived on the cable car shortly afterwards, and took a wander around the Western Table, which offered fantastic views on all sides. It was good to see Lion’s Head from above, which I had climbed the previous evening. People were paragliding off it, which must be fantastic.

We all met back at the bottom of the climb, Martin and I having decided that we had to walk back down again to truly be able to say we climbed Table Mountain, and hit the road out of Cape Town.

I only stayed in Cape Town for a few days, but it was long enough to get a good feel for the city, which seems very nice. It is set in a beautiful location, has a great climate, and a quick study of property prices there would indicate that it is around a quarter of the price of Perth!!

We headed out of the city towards the wine region of Stellenbosch, and it wasn’t long until we were in a winery, trying out many of the fine South African wines. What a perfect way to unwind after a day in the mountains.