After a fantastic lie-in at the hostel (I actually slept until after check-out time!) I packed my bags and made my way across the road to the next hostel, where I had managed to find a bed for my final night in Cape Town.

Martin and Rachel had tickets for the cricket, and so I entertained myself by first heading into town to sort out my finances, and make some necessary purchases. Cape Town is a beautiful city, and I wandered through the main city centre park admiring the majestic backdrop of Table Mountain. 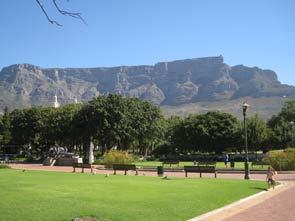 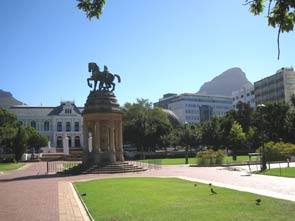 In the afternoon I decided to climb the steep and impressive Lion’s Head to the west of the city, which I imagined would give a fantastic view of both the city and Table Mountain itself. I began in town, and walked up Signal Hill at the north end of the ridge, which has a wonderful view of the port and the new soccer stadium, ready for the upcoming World Cup in June.

The climb was a bit tougher and longer than I had estimated, but I made good time, and arrived on the summit about half an hour before sunset, and was amazed thet there were at least fifty other people up there too!

The view was stunning in all directions, and I could have spent much longer up there admiring it.

However, I decided it might be wise to beat the crowds onto the thin track leading down, as I knew it would get dark quickly after sunset.

A quick descent in the fading light got me back to the hostel in time for a late dinner, and an early night, as I had an early start planned again for the next morning.