After my iceberg trip I stopped at the tiny little town of Vik, about halfway back to Reykjavik, and almost at the southern-most point of Iceland. At the youth hostel there I was the only guest for the night – it is very quiet here in the winter.

After checking in I asked the German couple who were running the place about the Northen Lights. The last time they had seen them was in October! Oh dear. However, tonight was the best forecast for aurora activity for several weeks.

From Wikipedia, “Auroras are the result of the emissions of photons in the Earth’s upper atmosphere, above 80 km (50 miles), from ionized nitrogen atoms regaining an electron, and oxygen and nitrogen atoms returning from an excited state to ground state. They are ionized or excited by the collision of solar wind particles being funneled down and accelerated along the Earth’s magnetic field lines; excitation energy is lost by the emission of a photon of light, or by collision with another atom or molecule.”

So the two key factors are the strength of the solar wind, and the Earth’s magnetic field. The strength of the solar wind goes through a ten or eleven year cycle, and at the moment is at the weakest point in the cycle. It will be at it’s strongest again around 2014 or 2015. (Ref: NASA Solar Cycle Prediction) As if this goal isn’t tricky enough already, this makes it even more of a challenge.

I have been keeping a regular watch over the week on the SpaceWeather.com pictures of aurora activity, and things seem to change very quickly, but being based in the city, and without a car to dash out to a dark area, it’s all very difficult. Their current picture of aurora activity can be found further down the left hand side of the SpaceWeather.com page. Here are two different pictures from last night, just an hour and a quarter apart (Iceland can be seen to the right of the picture, just below the 3 o’clock line):- 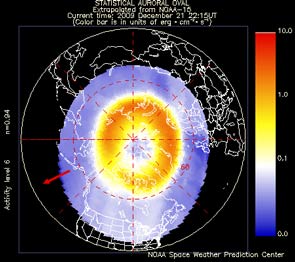 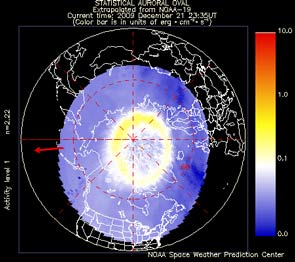 The one on the left, at 10.20pm last night is the brightest I have ever seen it!

Another useful source for aurora forecasts is the Geophysical Institute of Alaska University. Their forecast for last night was the best so far during the week that I have been here, but is still only a prediction of very weak activity.

So I wrapped up warm in all my layers again and drove out from the hostel to the top of the hill outside the town, and made myself as comfortable as possible in the stormy wind-buffeted car.

Being at the very south of Iceland, predictions were for low level lights on the northern horizon, but at 11pm there was no sign of anything. I decided to give it an hour or so, and at 11.20 I wondered if my eyes were playing tricks on me, as the horizon looked much lighter. Maybe my eyes were getting accustomed to the dark?

But as I watched I could see the light changing and shifting. It was a very pale white light, perhaps with the tiniest tint of green, and changes were slow and subtle. The appearance was as if cars with very dim headlights were moving slowly around behind the horizon.

I watched as the light moved and brightened along the horizon, and got out of the car for a few minutes. It was incredibly windy, and I was soon back inside!

The whole effect was very subtle, and slightly disappointing, having seen some amazing pictures of the show the lights can put on.

Just after midnight the lights dimmed, and I was about to give up and head home, when they brightened again slightly more towards the north-west, putting on the best show so far. Ten minutes later the horizon was dark again, and I drove back to the hostel.

I tried taking a couple of pictures, but my little camera is not up to the job, and all I got was a black screen. And to be honest, they would be uninspiring at best even if I could have captured what I saw. I think perhaps much further north in Iceland might have been quite good last night.

I am pleased to have actually seen the lights, having had to put quite a bit of effort into doing so, but think that one day I might like to achieve this goal in a better fashion, and see much more spectacular displays. Maybe I will get the opportunity in a few years time, when sunspot activity is higher? But for now I am satisfied to have done the best I can under the circumstances.