My last day in Iceland started in the dark again at the lovely little hostel in Vik. I headed down to the shore for a quick look around as it started to get light, and then headed onward, pausing to take a quick photo of the lookout point where I had watched the Northern Lights, as the previous evening I had had no idea of the layout of the land there.

From Vik I drove back towards Reykjavik, turning off to see the impressive Gullfoss waterfall. It’s about a half hour drive inland from the coastal road, and the temperature dropped all the way to around minus 7 degrees. At the falls the wind was howling across the semi-frozen falls towards the lookout, and despite the very spectacular view, I could only stand the cold for about ten minutes. Taking photos was very cold on the fingers! 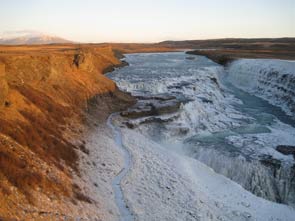 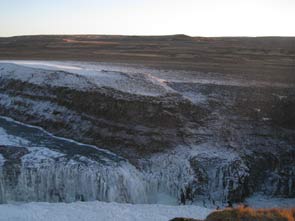 The wind and cold had covered everything that faced the falls with a layer of ice, and the rope barriers, the rocky ground and the icy grass all looked very beautiful in the low sunlight.

Next stop was Geysir, an impressive area of hot springs and geysers, an unusual mix of boiling water and solid sheet ice. The main geyser iitself is called Geysir, but this does not spout very often at all. However, right by it, Strokkur does so on a very regular basis, around every 5 to eight minutes or so.

The pool bubbles quietly for a while, and then as pressure builds, caused by bubbles filling the tube below, and then water rushing in and getting super-heated, the geyser explodes in a very spectacular fashion. 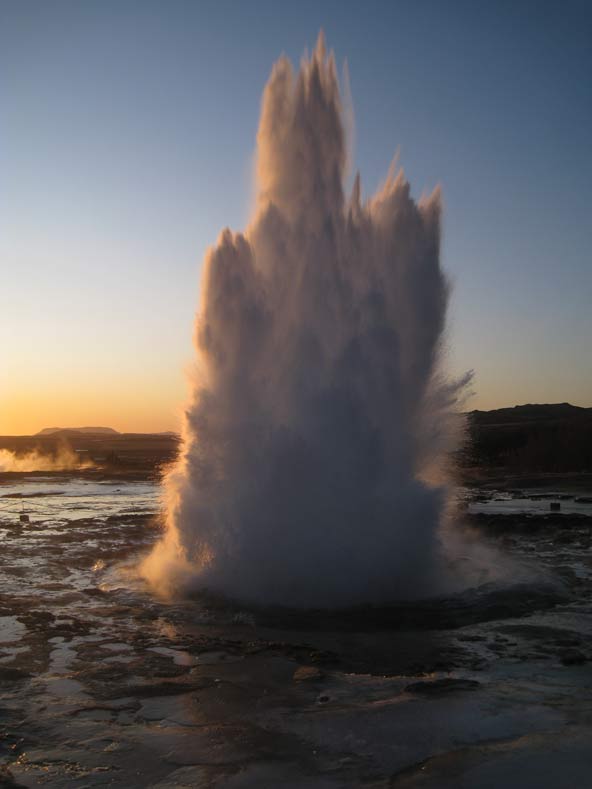 On my return to Reykjavik I dropped of Magnus’s spare winter clothes that he had lent me, dropped off the car, and headed home to pack for my flight back to London early tomorrow.

My week in Iceland has been great, it is quite an unusual and fascinating place. I’m not sure that it is somewhere that I could ever choose to live though, it’s just too cold. I much prefer the shorts-and-t-shirt warmer weather, I think.

Many thanks to all who have made my stay here such fun. Particular thanks to Magnus and Hildur, my wonderful couchsurfing hosts, and thanks too to Berglind, Inga and Tim.