Car hire in Iceland seems outrageously expensive, and for a while I was trying to co-ordinate a trip with a couple of other fellow couchsurfers, sharing car and fuel costs, but one person changed their mind, and another never made it to Iceland at all, as her flight was cancelled.

So it was back to the drawing board again. I suggested to a few of my contacts here that they might like to come on a trip, but most of them have to deal with the inconvenience of a job, and nobody that I know here could join me.

I had considered the bus, but there is only one bus during the week, which goes to Hofn, past where I want to be. And the cost one-way is a ludicrous 11.900 Icelandic Krona – that’s over $100. A flight from Reykjavik to Hofn is only a little bit more, at 13,900 ISK. But in winter there are no tours from Hofn to the lagoon I wanted to go to, so a car was the only option.

I had been given the phone number of a person who hires out their own car on a slightly cheaper, and much less formal basis than the car hire places, and I gave her a call last night. A deal was struck, and this morning Hildur dropped me off there just before 9am, and I was surprised to be simply handed the key, even before I had been to the bank to change some money, and was told where the car was.

I had a bit of an issue at the bank, when they refused to change my Australian Dollars (“We don’t take them!”) but after a couple of tries I found a card in my wallet that produced some cash from the ATM. I paid for the car, and without any form of ID or paperwork being required, I was on my way. I didn’t ask any questions – I’m sure the whole arrangement falls into somewhat of a gray area legally, but I was happy with the price I was paying.

It was still dark as I headed south-west out of the city, and a couple of hours later, as the sky brightened and an orange dawn revealed the bleak landscape, I passed through the tiny town of Vik, where I intended to return for the evening.

Another couple of hours driving eventually brought me to my destination, Jokulsarlon, or Glacier Lagoon at the foot of Europe’s largest glacier, Vatnajokull. The thermometer in the car had been reading between minus 4 and minus 9 degrees Centigrade for most of the journey, but a howling wind had made it feel much colder every time I had stopped to take a picture.

I wrapped up as warm as I could, adding extra layers to both body and legs, and headed out for a look around. The lagoon has been created by the glacier, and as huge chunks of ice break from the end of the glacier, they float into the lagoon, and sail around until they melt enough to get through the narrow lagoon outlet to the sea. The lagoon has been measured to be 190 metres deep in places.

In winter the lagoon becomes frozen over, and the boat trips that run during summer are closed. There were still patches of water, but all of the icebergs were frozen in place, and there was the occasional creaking and groaning as the wind tried to shift the looser ones.

There wasn’t a single other person there – no wonder really, as it was incredibly cold, but a clear sunny sky lit up the icebergs and sheets of ice in dazzling whites and blues. It was very beautiful, and when out of the wind behind a hill, silent and peaceful.

I walked for an hour and a half, but time ran out, as the sun set at 3.30pm ,and it started to get dark again. It’s only been light officially for just over four hours, and is the shortest day of the year. This is the furthest north I have ever been, just below the Arctic Circle, so today has officially been the shortest day of my life!

I walked as far as the end of the glacier itself, where the newest, biggest icebergs are locked in the ice. From far away they had looked small, but close up they towered impressively, and it is quite staggering to think that nine-tenths of their bulk is hidden under the water, and below that lies the deep dark, icy cold depths of the lagoon. It would be awesome to dive under the ice around the icbergs! Maybe something for the next list?

Like some of my other goals, this one has been a little harder to arrange than I thought it might be, and cost quite a bit more, but that makes it all the more satisfying to eventually achieve.

What a beautiful place, and incredible to have all to myself, even if only for the shortest day! 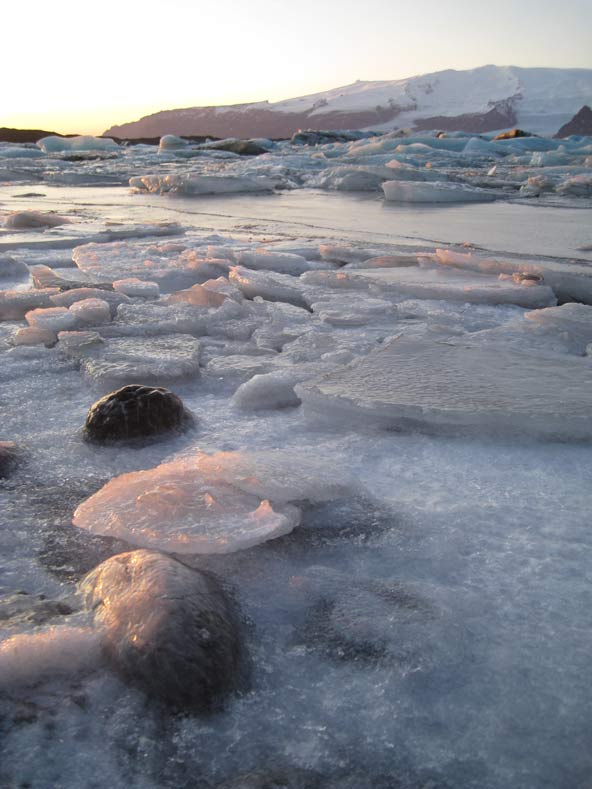