After the early start in Cannes the previous morning, the last thing I wanted to do yesterday was get up again at 5.30 in the morning. But I had been in touch with the organisers of the infamous Gloucester Cheese Rolling Festival, and they had told me that the only way to be certain of competing was to be there early, and line up with everyone else. There is no entry fee, no paperwork to complete, and no guarantee of taking part in the event.

So along with my brother Martin and partner Rachel, we headed westward out of London along the M4, and made it to the small village of Brockworth by around 8am. We found a place to get a coffee, and waited for the carpark field to open.

Our first view of the hill, as we drove out of the village, had us slightly worried, as it looked very steep, but it wasn’t until we actually arrived and scrambled up to the top that we realised just how steep it really is.

At the top of the hill Martin and I joined a crowd of others sat waiting for the first race. Tension and excitement was already building, and it wasn’t even 10 o’clock, still over two hours to go before the action started!

Eventually, when the burly security guards and event organisers arrived, we were all shepherded off to the side of the run, and formed some semblance of an orderly line, and sat to wait out the next couple of hours.

We had managed to get a pretty good position, and I was reasonably confident of making it into the first race. There are only five downhill races in the day, four for men and one for women, and the number of competitors is strictly limited to fifteen per race.

As the morning progressed the hillside filled up, and an estimated 5,000 people vied for position to get the best view of the upcoming events. The place was packed, and the line of potential competitors behind us was steadily growing. We had certainly been wise to arrive early, as there were going to be a lot of disappointed people.

Just before midday a light rain started, and made the whole hilside much slippier, and at about five minutes before midday they let the first fifteen through the little gate and onto the top of the hill. Both my brother and I made it through, despite the chaos at the front, as everyone tried to get in for race number 1.

There was a huge cheer from the crowd as we lined up, and my heart was hammering – there was a real danger that this could end very painfully! After brief instructions on how the start would be conducted, the cheese was rolled, and we were off!

I think in my younger years I might have been a lot quicker than I was yesterday, but my middle-aged common sense kicked in, and I ran with slightly more caution than many of the other young guys, most of whom were probably at least 20 years younger than my brother or I.

I still found myself tumbling and sliding, completely out of control. It was impossible to stay on your feet, as the slope was so steep, and by now quite wet and slippy. Somehow though, I managed to make it down in one piece, my number one priority, but was one of the last in my race across the line. It’s the taking part that counts, I told myself proudly at the bottom of the hill.

The atmosphere at the bottom was fantastic as the winners collected their prizes and certificates, and we shook hands all round with the guys we had run with. It was only later, as the adrenaline began to wear off that I started to feel the cuts and scrapes on my arms, and the ache in my left shoulder. Compared to my brother though, who had chosen to wear shorts for some reason, I was relatively unscathed.

This picture courtesy of Liezel, who we met in the crowd, and who kindly emailed me this through:- 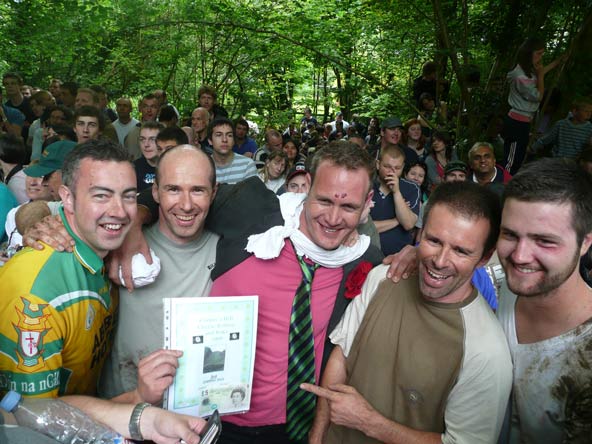 We stayed at the bottom of the hill, and had an excellent view of the next two races. I think that if I had seen the carnage on the hill that race 2 produced, I might have been a lot less inclined to run myself. One of the guys looked like he possibly dislocated or broke his shoulder, and there was quite a break before race 3 started, as he was carted off to hospital.

Back at the top of the hill after race 3 there was another long break as another casualty was transported away – the rumour that ran through the crowd was that he had fallen out of a tree! He was taken away down the main slope, a tricky rescue operation in it’s own right, his neck immobilised to prevent possible further damage.

After race 4 we made an early exit to avoid the worst of the traffic chaos that would obviosly follow as everyone headed for home, and got away pretty quickly.

And so, as pretty much all eccentric UK Bank Holiday Monday activities do, the day ended in a trip to hospital for the unfortunate few, and a headlong dash to the nearest pub for everyone else! What a fantastic day! Thanks to Martin for coming along and being foolish enought to come and run with me, to Rachel for getting us there and back, and to Sutty too for joining us too. Thanks also to the organisers for putting on such an incredible event! I have no idea how this continues to run without the Dept. of Health and Safety stepping in!! Fantastic!

Hey, you also made it on the best photo blog on the Internet, the big picture:

Hi jraff, thanks for the link, they are awesome photos.