Wow! As an example of how you can expect the events of a day to unfold in one direction, but a couple of things change, and the course of the day takes you in quite an unexpected direction, yesterday is certainly going to be hard to beat!

I woke early again, feeling slightly feverish, and wondered casually if I might have caught the swine flu virus already. When I passed through Hong Kong the airport resembled a hospital wing, with about a third of the travellers wearing surgical masks, notices everywhere displaying dire health warnings, and temperature testing stations set up in several locations for paranoid incoming travellers.

I was looking forward to a quiet day at Valerie and Pierre’s apartment, and wanted to catch up on some emails. My main priority was to try and sort out some new accomodation, as Valerie and Pierre have family arriving today, and they need the space.

I had had a few contacts from people who had suggested that they may be able to help out, but so far nothing had been confirmed, so I re-emailed a couple of people. My first contact was Rikki, who runs Exhibition Consultants International Ltd. and builds stands for the film festival, among other things. He had been told about me by Philippe from EIE Global, who helped out with my Eiffel Tower goal back in September last year.

My second contact was Adrian, who first contacted me via the website way back when I first started my goals quest. At the time he lived in Cannes, but has since moved to London. He still has many contacts here, and thought he could possibly find some accomodation for me in Cannes itself.

Adrian was quickly on the case, and put me in touch with Lao from Cannes-based accomodation agency Azur Alive, and Lao said that he would be glad to help, and that I could use one of their apartments at no charge! Marvellous! I arranged to meet him at around 3pm that afternoon.

Almost straight afterwards Rikki called me, and although he had been unable to track down any accommodation, he had a contact from the UK Film Council who would like to meet me in the afternoon, with the possibility of a ticket to a screening. It looked like things were coming together, perhaps.

After a quick shower and shave Valerie dropped me off at the train station, and I met Lao at his office. He took me to see a lovely fourth floor apartment right in downtown Cannes, and left me with the key. I can use the place for about 5 days, and then he will find me another. Fantastic.

Next I went to meet Rikki in front of the Palais, and he produced a pass for me, and we went through security, into the festival building itself. I almost felt like my goal had been achieved, as I was already somewhere that the general public could not access.

We walked through the huge marketplace area where stands from movie production companies from all over the world are set up to sell their wares to movie buyers. We made our way to the International Village area, and at the UK Film Centre, Rikki introduced me to Tina from the UK Film Council.

She is Head of Industry Relations, and as well as helping me with my goal, hoped that the Film Council might benefit from some publicity too. She rang a couple of people to set up some possible interviews, and offered me a ticket to the movie which was going to screen that evening at 10.30pm.

At first I didn’t quite grasp the significance of the ticket I was given, but when Rikki saw it, he was amazed. The movie being screened was the premiere of the first movie in the Film Festival competition, called “Fish Tank”, written and directed by Andrea Arnold. Andrea won the Prix de Jury in 2006 with her first movie “Red Road”, and “Fish Tank” is her highly anticipated follow-up.

Because the UK Film Council co-funded both of these movies, they had some pretty good tickets for the screening, and my seat was in the “Orchestre” section. “That’s right at the front, up the red carpet and in through the main door,” Rikki exclaimed! “You’ll need a tuxedo!” Hmmmm!

However, somewhat coincidentally, Eric, a producer in Hollywood had called the day before I left Australia, and he had put me in touch with an actor/writer/filmmaker who would be here in Cannes. I had spoke to Bobby Leigh earlier in the day, and was hoping to meet him later, and he had suggested that if I managed to get a ticket, I could borrow his suit, if he wasn’t using it at the time.

I tried Bobby a couple of times, but his phone was off – he was obviously having a busy first day. I went looking for a suit hire shop, and soon found one pretty close to my apartment. At 7pm I gave Bobby a final try, and upon discovering that his phone was still off, I went ahead and was relieved of 90 Euros for the hire of a tux and shoes for the evening.

I was going to have to stay in Cannes for the night, as the movie would finish long after the last train, and I called Valerie to let her know. At the apartment I showered and washed as best I could, but had no toiletries at all with me, and no more cash either, as it had all gone on the suit, and a sandwich for dinner. The apartment was so empty of anything at all that I had to dry off after the shower with handfuls of toilet paper! All my stuff was still back in Nice.

Eventually I suited up and headed down to La Croisette, the seafront area, and wandered around soaking up the atmosphere, which was electric. I joined the line of other smartly dressed movie-goers, and made my way through several security and ticket checks. Many others with different coloured tickets to mine were directed off through side entrances, but I kept waving my ticket about, and kept getting waved through, until I was at the foot of the red carpet. To either side were huge crowds of photographers, but they were obviously waiting quietly for the stars to arrive.

The walk up the carpet was wonderful, and I stopped at the top to look back down. Many others were taking photos, despite warnings on the ticket that photography was not allowed, and so I joined in too. What a wonderful atmosphere!

My ticket granted me access through the main doors, and I was escorted right to the front of the cinema and told that I could sit wherever I liked. I picked the front row!

On the huge screen you could watch others arriving on the red carpet, and the seats slowly filled around me. Eventually the director, Andrea Arnold arrived with some of the stars from the movie, and I watched on the big screen as they made their way up the steps outside.

It was interesting to see their progress live through the lobby area, and then turn around and see them come into the room, to a huge round of applause.

Eventually, when all were seated again the movie started. It is a very English, very gritty study of a girl growing up on a rough housing estate in southern England, and was very compelling and well acted. At the end there was a huge standing ovation, which was fun to be part of.

Afterwards, we had to wait for the stars to go back down the steps, and then followed suit. I met a Chinese girl who appeared to be on her own too, so we swapped cameras and took plenty of pictures of each other. She seemed to be as thrilled and excited as I was to be there.

At around 1am I wandered back to the apartment through the busy streets with a huge smile on my face. What a way to achieve my Cannes goal! I couldn’t possibly have imagined being so successful in acquiring a ticket for a screening. What a dream come true! 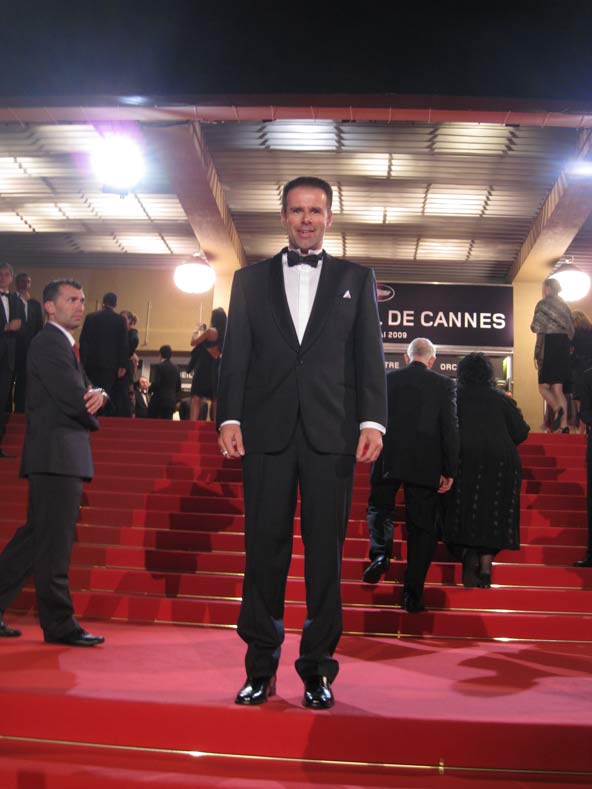 Huge thanks to all who have helped to make this goal possible:-
Phillipe, Rikki and Tina for the making the ticket a reality.
Adrian and Lao for sorting out my accommodation.
Eric and Bobby for their advice and support.
And of course, Valerie, Pierre and Thibault for their wonderful kindness and accomodation in Nice.

Valerie had contacted local English-speaking Riviera Radio on my behalf, and this morning I was scheduled for an interview with them at 9am. I put my suit on again – I had paid 90 Euros for it and was determined to get value for money!! – and headed down to the huge Hotel Martinez on the seafront. There I met Peter, who transmits live daily from the lobby there, and was soon live on air. It seemed to go pretty well, and when I eventually got back to Nice Thibault said he had heard the interview and said it had sounded great. 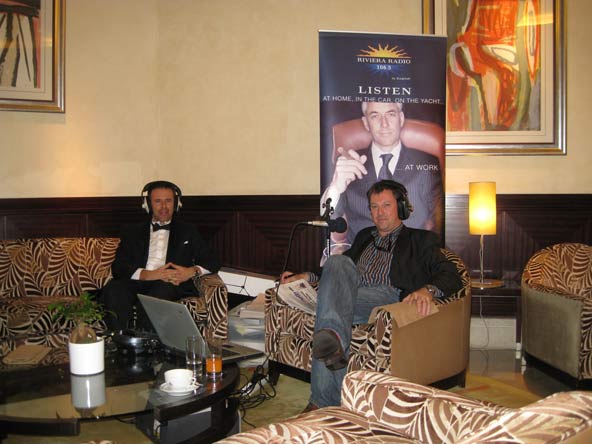 What an amazing 24 hours! What an awesome way to achieve a goal! What an adventure!