Okay, so this never happened, but if it ever did happen, it might go something like this:-

I hoped to achieve my goal of topping 150mph, or 250kph, on a motorbike in a fully legal fashion while in Germany last year, where there are certain autobahns where any speed is allowed. However, it proved to be a bit trickier than I had imagined to get my hands on a fast bike there, and I only had limited time available to me, and a lot of beer to try out at Oktoberfest, so this particular goal was shelved at the time.

Back in Australia it is easier for me to get my hands on a fast bike, and a very good friend, who wishes to remain anonymous, offered to lend me his bike, the make and model of which he would prefer to remain undisclosed too! All I am at liberty to say is that I could borrow, should I ever wish to do so, a very black bike that is quite a bit quicker than mine.

So if I was going to do this on roads where this sort of thing would be frowned upon, I would pick a time very late at night, and perhaps meet with a couple of friends at 2am by a long straight stretch of very quiet and deserted freeway.

We would take a steady ride down that freeway for a couple of junctions just to check that it was clear of any obstructions, debris, or anyone that might not approve of our activities.

I would then leave these people at a couple of strategic points on the route, and go back up the freeway to the planned start point. If by a pre-arranged time I had not received any text messages indicating otherwise, I would be clear to set off.

I would accelerate hard down the sliproad onto the freeway, and be surprised how quickly the bike got to 200kph on the digital readout. There would be 5 kilometres of straight road ahead, with only one junction on that stretch, and on the bridge my friend would have a video camera rolling.

I would tuck down behind the fairing, and try to hold as streamlined a position as possible as I wound the throttle right to the stop, trying to cast a quick glance at the speedo every now and then to see the numbers still slowly increasing, past 230kmh and climbing towards 240.

Over 240kph the bike would be nearing it’s limits, and progress up through the final numbers would be slow, and just before the bridge it would climb to 243kph, and I would hurtle under the bridge, and gradually start to slow down, feeling a little disappointed.

At the end of the run, I would probably stop, and after a quick discussion on the phone, agree that it would be worth a try in the other direction, as there may be a slight headwind heading down the freeway, which would be a tail wind heading back up.

On the second run the bike would accelerate again quickly, and start to struggle again at around 240kph, but perhaps with a tail wind, the numbers would keep climbing slowly, and before the mid-point of the run the display would show 253kph. Another kilometre to go before having to back off, and I might just see 260kph flicker on the digital readout, before winding the throttle back, whooping with excitement, and beginning to slow down, back to the 100kph speed limit before reaching the exit ramp.

Of course, none of this ever happened, but if I was going to do it, very early morning on Friday 13th would be an appropriate time to give it a go!

And if I ever did get around to doing something like this, I would like to point out the following. I realise that 260kph is not all that fast compared to some of the modern superbikes on the roads, and I have seen some incredible videos of people riding in traffic on busy roads at speeds up to and over 300kph. However, I am not that crazy, or that skillful on a bike, and know my own limits.

If I was going to do anything like this I would first of all ensure that I did not endanger any other road-users, by picking a completely empty stretch of road, and I would like to try to make the whole thing as safe as I possibly could for myself too. After all, I still have a lot more goals to achieve yet!

So if I had done this, which I must stress once again, I did not, it might look a bit like this:- 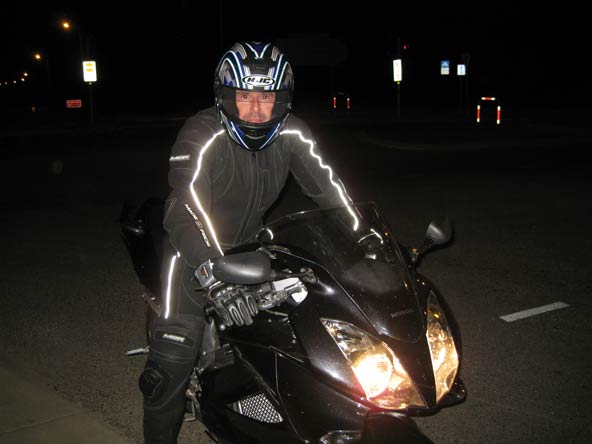