The start of this whole 100goals adventure has it’s roots back in my earlier project, which was to sell my “life”, in order to free myself up to travel, and make a fresh start. More information on ALife4Sale here: 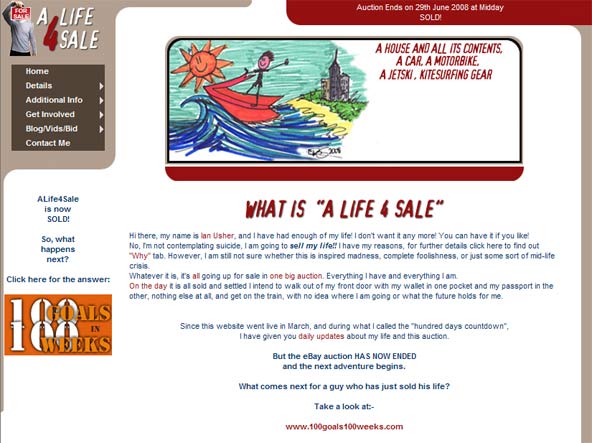 Unfortunately the ALife4Sale eBay auction did not go quite as I had hoped, and ultimately the sale fell through. You can read all about what happened in an earlier blog here:
Who bought ALife4Sale? – all the answers….

I had already decided that I wanted to try to achieve my 100 goals in 100 weeks, and for a while wondered if it was going to be possible. After all, I still had a house and all my possessions, I would be paying a mortgage, paying all of my travel costs, and not earning any income at all. The maths really did not add up!

But in the end I decided to go, and put the house in the hands of a real estate agent, hoping it would sell quickly. Once again things did not work out quite as planned, and at the time I put my house on the market, the worldwide financial mess was just starting to affect Australia, and property was not moving at all.

Over the past few months I have had to drop the asking price a couple of times, as values have tumbled, but eventually I received an offer, and a sale was agreed upon. This is, however, for significantly less than I had originally expected.

And today the sale was finally settled, and I believe the balance of funds has been paid into my account, after my mortgage and loan have been settled. This finally frees me considerably, as I now have no mortgage outgoings, and actually have some cash in the bank too, although not as much as I had initially expected.

So I guess that this is as close as I will get to achieving my goal of selling my life – I sold my car before I left on my travels, and now the house is gone, and I have relatively few possessions stored away now – so with no ties, and cash in the bank, I am free to go where I want and do as I please, which was my original aim.

Congratulations! That must be a huge weight off your mind. I raise a glass to you and your funded future!