I once saw a documentary about the Galapagos Islands, and was amazed by the huge schools of hammerhead sharks that gather there at certain times of the year. Without knowing any more details than this I added seeing this spectacle to my list of goals, and it duly became part of my list of 100 goals.

I received an email from Philip in mid-December, suggesting that I might be able to achieve this goal while in Japan, and I did some research. There are actually three major places in the world where these gatherings of hammerheads occur, the other two being the Caicos Islands in the West Indies, and at Yonaguni Island, here in Japan.

So with a week or so available in Japan after a bit of juggling around with dates and flights, I contacted Doug of Reef Encounters in Naha for further details. I managed to eventually arrange three days down in Yonaguni, which involves flying Tokyo to Naha, about three hours, Naha to Ishigaki, about an hour, and then a final half-hour hop to Yonaguni itself.

On the flight from Hawaii to Tokyo I had watched a fairly routine action movie, then as my second choice, I picked a documentary called Sharkwater, which was fascinating.

It isn’t the usual sensationalist shark-attack fright docu, but a well balanced telling of how illegal and uncontrolled long-line fishing in certain parts of the world is devastating shark populations, with potentially catastrophic environmental results.

One concern is that removing a top predator from a balanced eco-system means that species further down the food chain that can multiply unchecked, and if these are eaters of plankton, one of the major producers of oxygen on Earth, results could be disastrous.

The documentary showed the vast amounts of sharks, including hammerheads, killed each year in Caicos, simply for their fins, to make shark-fin soup. Often the fins and tail are cut off the shark while still alive, and it is simply tossed back in to the water.

Perhaps if this continues unchecked, there will soon be no more schools of hammerheads to come and see! Fortunately, in Japan, this is not currently a problem, and the sharks can gather here unmolested.

So after an overnight stop in Naha I flew first thing down to Ishigaki, and from there across to Yonaguni, which is the most westerly point of Japan, quite close to Taiwan.

It is a small island, and reminds me very much of some of the small islands I have visited in Thailand, but without the rampant backpacker tourism. It is quite tropical, but very run-down, and it really feels like being at the end of the line – there is only one flight in and out each day.

I was met by Chia, on of the dive guides from Sawes Diving, and along with Akiko, another girl who had flown in on the same flight for a few days of diving too, was taken for a quick lunch before the afternoons diving began.

Our first dive was a reef dive to check we were both reasonably competent. We went out from the small harbour on the dive boat, and entered off the back, heading for the bottom pretty quickly as there is a strong current. We saw a turtle pretty much as soon as we entered the water, and a couple of eels, and a vast array of tropical reef fish as we drifted along with the current.

Our second dive was with a larger group, ten of us in total, looking for hammerheads, and we entered in deeper water, and swam down to about 15 metres, and hovered there drifting along with the current, looking around for shadows in the water.

At first the bottom was not visible, and we just hovered in this complete blueness, but as it got slightly shallower I could just make out the seabed far below, perhaps another 30 metres or more down. We were drifting at quite a fast pace, I was surprised to see.

We looked around for a while, and Akiko and I spotted a hammerhead in the distance at the same time. It looked pretty big, but was a long way away, and it glided past and out of sight. I spotted it again a minute or so later, and it disappeared again. That was it for that dive, but I was very pleased to have seen one, at least.

After dinner I was dropped off at my accommodation, a small, backpacker-style guest house, and settled in for the night. I got chatting to some of the other guests, who turned out to be quite a large college group, and I spent a fun evening drinking beer and sake, and playing cards.

The next morning I was collected at 8am for the first dive, another deep water drift, which was uneventful for about twenty minutes, until I turned around, and right behind Akiko and I we spotted a group of five hammerheads, one pretty close. I had borrowed a camera for the dive, and managed to get one picture, the only one of a shark taken on that dive! I was very pleased.

Before lunch we took a bit of a tour around the island, which didn’t take long – it’s only a small place.

After lunch we went out again for two more dives, but the first was very uneventful, with no sharks being spotted at all. The last dive of the day was much more exciting, however. A couple of minutes after dropping in I spotted several of the group turn and head off to the right at speed, and when I turned there was a large group of hammerheads just disappearing into the shadows. Later Chie, who had spotted them before me, estimated that there were about thirty of them.

A minute or so later Chie spotted one shark returning, and pointed it out to me. We were on the right of the group, and the shark was over to our right, approaching us slowly. I had the camera set for video, and started filming and swam towards it. It passed pretty close in front of me slowly, and as I got closer it turned and casually swam away.

They really are pretty shy, and seem to keep their distance, and it is awesome to see them so close. There is no fear involved, despite their size, as they are so wary around divers.

What an excellent dive!

The next day we did a reef dive in the morning, in an area where the fish had been hand-fed previously, so were pretty fearless, and would come right up to your hand or mask to see if you had anything for them.

After lunch, the first dive was at Kaitei Iseki, an ancient ruin site discovered in 1986 by the owner of the dive shop, Hachiro, who guided us on the dive. It is a huge place, with some very unusual formations which do look like they could be made by people. The place has been the subject of a TV documentary, and is suggested to perhaps be around 10,000 years old. If this is true, it could possibly cause a re-think of Japan’s history.

My final dive here was further around the island, where there is a memorial plaque dedicated to free-diver Jacques Mayol, who died in 2001, and was the inspiration for the movie The Big Blue.

What a fantastic three days of diving. Many thanks to Yuko and Chie, for their excellent guiding, and to all at Sawes Diving. 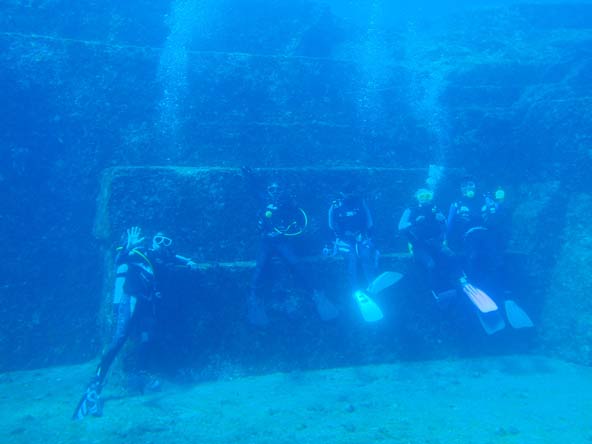