It was an early start, up at 4am and back across to the Kathmandu Guest House for 5am to meet fellow trekker Henry, and our guide Deepak. We drove through the dark streets to the airport, which was already thronging with others flying to various destinations. After the usual formalities we were bused out to our plane, a Twin Otter, the smallest commercial plane I have been on, with one seat on either side of the aisle.

The flight was quite spectacular as we flew low over hills and valleys, and off to the left huge mountains could be seen looming out of the very hazy conditions. It must be an incredible flight in clear weather.

Incredible would also be a good word to describe the runway at Lukla, which is very short, and runs quite steeply uphill after touchdown. The plane has to stop quicky before it reaches the solid rock wall at the top end. We watched our plane take off again with it’s fresh load of passengers returning to Kathmandu. A swift acceleration down the hill, and take off before the end of the runway, where the land simply drops away into the valley far below. No margin for error here!

We started our first day of the trek at an easy pace, stopping often at temples, or spectacular views of the Dudh Koshi river winding through the valley below. In the hazy conditions the huge mountains looming around us were just vague shapes, a suggestion of the towering majesty that must surround us.

Three hours of easy walking on a relatively flat track took us to Phakding, where we ate lunch and booked in to our accomodation for the evening. Henry took an extra side trip to a small monastery way up on the hill in the afternoon, and I spent some time re-organising my hastily packed bags, and reading in the afternoon sun.

An easy and pleasant start to the adventure.

After an early night last night both Henry and I were asleep by 9pm, and awake again at 5.30 in the morning. After a slightly earlier breakfast then planned we were on the track again before 8am. Another three hours or so took us to the Sagamatha Park Entrance, and after a bite to eat we began the steep toil upwards to Namche Bazar.

The route was busy, with trekkers both heading up and coming down, porters, horses and yaks. Apparently the yaks can be a bit bad tempered, and when they go past you need to stand on the uphill side of them, as every guide seems to have a tale of a trekker being pushed over a steep edge by a grumpy yak.

We arrived in Namche ahead of schedule, as I think both Henry and I are making pretty good, steady progress. I have been taking the remainder of my anti-altitude sickness tablets left over from Peru, and so far I have been doing fine. I may have been helped by the fact that it has been a much steadier climb from sea-level to 11,000 feet than the flight into Cusco was.

Namche is a bustling place, and after a coffee I wandered around the market place and shops stocked with mountaineering goods, food, and Nepalese trinkets. It’s all outrageously expensive, as it has all been carried up by the amazing porters, who often carry loads of up to 100kg, or over 200 lbs. It shames you a little when they come charging past with a monster load, wearing flip-flops, as we struggle upwards with a tiny rucsac and proper hiking boots!

After a later breakfast we headed up the hill to a viewpoint from which we got our first clear view of Everest towering in the background. We took a look around the sherpa museum, and then headed further uphill, past an amazing little dirt-strip airfield, on to a tea shop high on the ridge, at over twelve and a half thousand feet, where we sat enjoying spectacular Everest views in the sun.

We were back in Namche by lunchtime, and took the rest of the afternoon to relax. Today is just a day to acclimatise to the higher altitude, before pushing on higher into the spectacular mountains. This is probably the last opportunity for access to both electricity and internet, so I suspect this will be the last blog entry for a while. 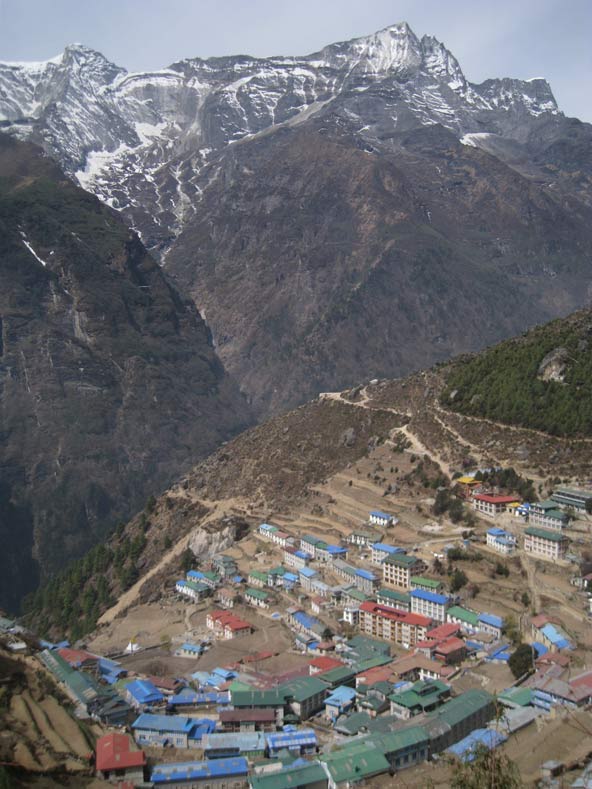 I just stumbled upon your blog by accident…but thank you for the amazing stories and photos. It looks like I have a lot of reading to catch up on. Best of luck!