I spent today making some final preparations for my Everest Base Camp expedition, which starts early tomorrow morning with a flight to Lukla, high in the Himalayas.

My first job was to repack both ruck sacks with my requirements for the next two weeks or so, and bag up all the stuff I didn’t want to take with me, to leave here in Kathmandu. The guys at Himalayan Encounters have organised a guide and porter, so the larger ruck sack will be carried for me, and I plan to take my smaller, lighter day bag myself.

Next I decided to move out of the Kathmandu Guest House to a much cheaper hotel I had found on my wander around last night. Instead of $25 for my second night in Kathmandu, I am now paying $5. I have already spent the money I have saved on an Everest trekking map, some light waterproof trekking trousers, and a book to take for the evenings.

Earlier this evening I met a fellow trekker Henry from Colorado, who is on the same trek as me, and we met our guide too. I also had to go and rent a decent sleeping bag and down jacket for the cold weather ahead. These were incredibly cheap to rent, at less than a dollar each per day. Marvelous!

Internet access is a bit tricky at the moment here in Kathmandu. There is good access at both of the hotels I have used, better at Hotel Nana, tonight’s $5 cheapie, as it’s free, but electricity is the problem! Well, apparently water is the real problem.

Much of Nepal is powered by hydro-electric power, and water levels in the power-producing dams are very low, so electricity production is limited. Power shutdowns are scheduled each day, and last night the power was off from 6pm until midnight. I didn’t know in advance, and hadn’t charged the laptop battery.

This morning the power was off again, and although the internet at the hotel was still working, running off a generator, from 10am to 4pm it was impossible to recharge the computer again. Very frustrating! Tonight it goes off again at 9pm so I’m trying to get all my batteries charged, and everything I need to do online done before then.

I am still planning to take the laptop with me on my trek, and will try to write up the journey as regularly as I can, along with photos each day, but I have no idea when, or even if I will be able to upload anything. I suspect I may be able to do so at Namche Bazaar, Sherpa capital of the Himalayas, when we stop over there for a day of altitude acslimatisation, but that may be the last chance for the next two weeks or so.

So I’m afraid you may just have to wait to see how the whole trek works out.

Here is a map of the route: 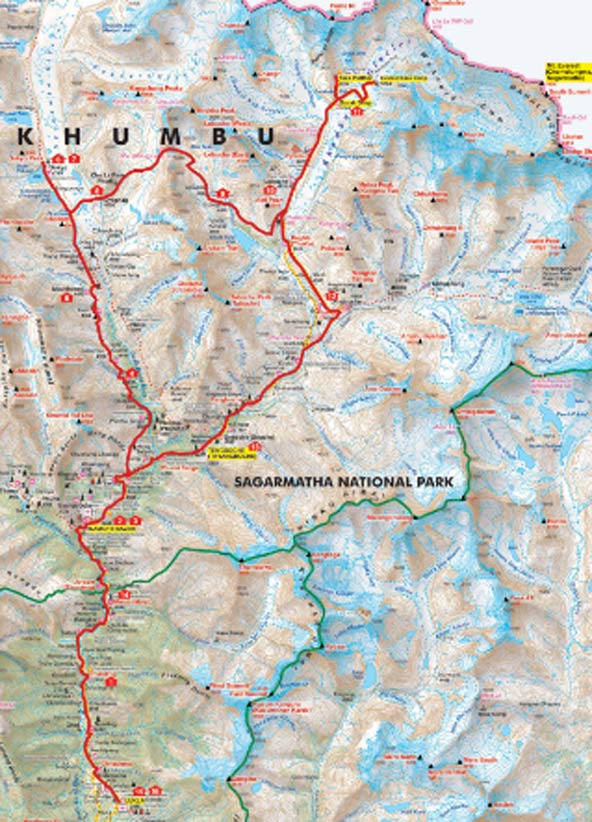