I flew into Dubai early this morning, and as the plane started it’s descent at about 5.30am local time, the pilot announced that the temperature was 38 degrees C already. I’m fairly used to hot weather, having worked in the mines in the north of Western Australia, but it was hot here today! Really hot! It’s not the dry heat of the West Australian desert, but that clammy heat which just means you sweat all the time.

I soon found the bus to the Youth Hostel, and dropped my bags off there and went to explore, as I would be unable to check-in until 2pm. The guy at the hostel directed me to the bus into the city centre, and I was off, and completely lost within half an hour. Apparently, so the bus driver told me, I had missed the stop for the city centre and was on my way back out of the city.

I wandered around happily, and found the creek which runs through the centre of the city, and got my bearings. Once I found the main bus station, and got a map of the bus routes I was fine, and hopped on and off buses in and out of the city, taking a ride out to see Burj Al Arab, the amazing hotel that looks like a dhow sail. The airconditioned bus stops are a welcome relief.

I then went and visited the Gold Souk, where almost every shop sells jewellery. One of the things I noticed about Dubai is that there seem to be areas dedicated to one particular product. For example, where I was dropped off by the first bus, every shop sold computers and accessories. Turn one corner, down one narrow alleyway, and you are in the textiles area, where every shop is filled with silks of all colours.

The other thing that is most striking about Dubai is that it would appear to be the world’s biggest building site. Everywhere you look there are cranes and massive half-completed concrete constructions. Every road has red bollards and tape, diversions and new sections being laid.

They have built some amazing stuff, but there is more being built all the time. Burj Dubai is incredible, and will be the tallest building in the world when completed. It dwarfs everything else around it.

Food has been great today, with a lot of Indian influence, and I have enjoyed a couple of very spicy mystery dishes.

The cost of things seems pretty random, and a lot of things seem very cheap. The buses seem to have a single flat fare of 2 Dhirims to go anywhere (about 60c), so it’s very cheap to get around. Food is reasonably cheap too, but I made the mistake of having a coffee in nice coffee shop in a shopping centre, which turned out to be the most expensive coffee I have EVER had – I should have known, it had the word “Barista” proudly displayed above the shop entrance. I was a good coffee though.

When I finally made my way back to the hostel and checked in, I went for a shower and laid down, only to be woken what seemed like minutes later by the loudest loud-speaker just outside the window, chanting to call the faithful to prayer.

After a wander back out for some more spicy food, I dived into the hostel swimming pool, and lazed in the bath-temperature water as the sun went down, and the faithful were called to prayer again.

What a good first day! 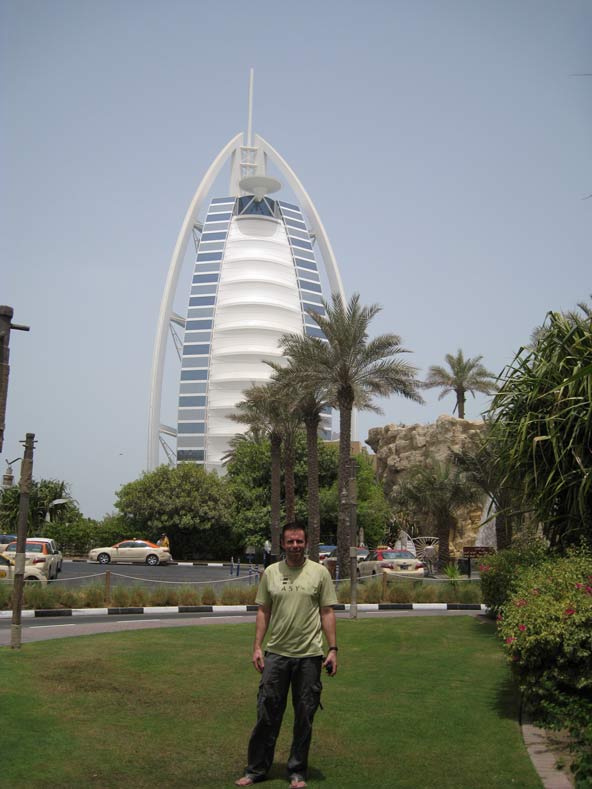 I’m so glad you’re able to keep us posted via your blog! I was afraid once you started traveling we would have to wait weeks for updates. And photos, as well! So cool that we can follow along!

Now…to make things really interesting, I challenge you to meet at least one new friend (or at least character) with each adventure. How about making your list of “100 people I want to meet” and it can be a scavenger hunt! Things like: -Someone with blue hair
-Someone who I meet on the bus
-Someone who asks me for directions
-Someone with beautiful eyes

Places are cool, but people are what really turns me on!

As you may have noticed, yes, not only do I have the wallet and passport, but the laptop and camera too. Should be able to keep things updated fairly regularly.

And you are so right, for me a huge part of this trip is about people too. I certainly want to make as many new friends as possible, and am already doing so.

I stumbled onto your blog and really enjoyed reading it. I’m a big fan of Dubai and can’t wait till I visit there in about a month. Just wanted to ask you about the hostel you stayed at. How was it? How was the price/accommodation/fun factor etc… sorry I dont mean to take up your time but if you can let me know i’d really appreciate it.