Well, we’re off to a flying start, as the first goal has been completed successfully.

Today I caught the bus out to Mall of the Emirates, where SkiDubai is situated. What an awesome place. After meeting my friend Mark from Perth at the entrance as planned, we had a quick chat, and he was off for his ski lesson. I paid for two hours on the slopes, and was issued with jacket, trousers, boots and board, and I was straight onto the chairlift.

The first couple of runs were a bit shaky, it’s been almost three years since I was last on a board (how has that happened?), but it soon started to come back.

The place is pretty big, with a four-seat chairlift, and a single drag-lift too. I had a few goes on the chairlift, but found the drag to be a lot quicker, so managed to fit quite a few runs in.

I thoroughly enjoyed myself, and for a while it was possible to forget that it was over 40 degrees outside!

Finally I reckoned my time was up, but nobody was checking tickets, so I went for “one more run”. About half an hour later I had to call it a day, as I was meeting friends Jeff and Socorro at 4pm, and was now running late. I got changed very quickly, and dashed off to meet them. 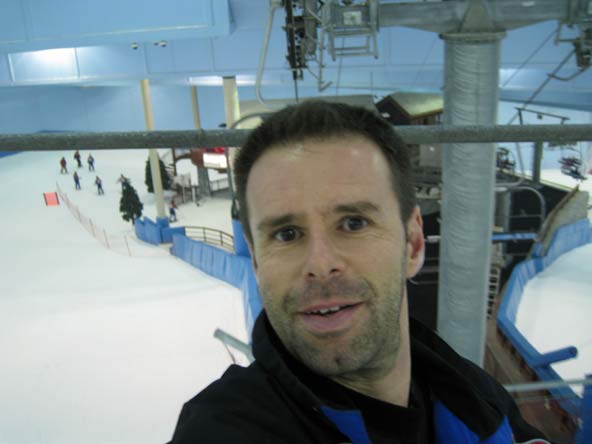 Yeah, I had the top parts of the slopes pretty much to myself, and never had to wait at all to get on the lifts. Great place. I guess there aren’t that many skiers or boarders in Dubai, as there has never been snow there until very recently!

Hi there,
Make sure you read all the blogs and see what happened to me. The sale wasn’t the biggest success, but it certainly did lead to lots of new adventures.
Good luck and best wishes,
Ian