Accomodation on Christmas Island always looked like it was going to be a bit of an issue, and is something I have been trying to resolve for quite a while. From what I could find out on the internet, there is no form of cheap hostel or backpacker-type accomodation, and the only options on offer on the Christmas Island Tourism Association website seem to be expensive resorts and luxury cabins. There is no way I can afford $150 per night for a couple of weeks!

So helped out by Katrina at the Christmas Island Tourism Association I got in touch with the local newspaper, The Islander. The paper is published fortnightly, and they kindly placed an advert for me, asking if anyone could help me out, by maybe renting me a room or lending me a couch for a few nights.

I also finally decided it was time to find out more about “couch surfing”, which has been mentioned to me a few times as I have travelled. I registered at couchsurfing.org, which is a network of fellow travellers who help each other out with travellers accomodation – a couch to stay on – surf the world from one couch to the next. I think it’s a fantastic concept, as I already know that you meet some amazing people while travelling. I will certainly be offering a couch if and when I ever settle in one place again.

On the website I found only one person on Christmas Island with a spare room to offer, and contacted Braydon, fully expecting his couch to be occupied for the crab migration season. Not many backpackers ever make it to Christmas Island, he has only hosted three people, and I would be welcome to use his spare room. Brilliant!

I finally landed at Christmas Island at around 7pm, about 11 hours later than scheduled, and the friendly customs officer asked if I had found any accomodation yet – he had seen my ad in the local paper! I was met outside the airport by Gordon, who had also read about me in the paper and had emailed me. He runs Island Taxis, and had kindly offered to give me a tour of the island and drop me off at my accomodation. However, it was now dark, and the open air cinema had just started it’s showing of “The Taking of Pelham 123”. “I also run the popcorn stand there,” Gordon told me, so I quickly rang Bray. “I’m at the movies!”

Gordon knew Bray, everyone seems to know everyone here, and pointed him out on the outdoor cinema bench. We said a quiet hello, but couldn’t speak much more for the next couple of hours, as we watched the movie, which was pretty good.

On the way to Bray’s apartment we had to weave around on the road quite a bit to avoid the occasional crab, and on just outside the flat I got my first close-up look at one of the Christmas Island red crabs, which was climbing up the wall there! It was pretty big – seeing thousands all on the move together will be awesome! 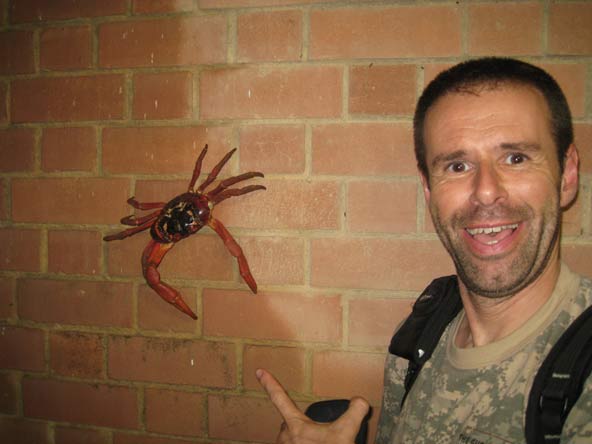 Thanks to Gordon for the airport pick-up and potential accomodation, and Bray for the spare room. Can’t wait to see the crabs out in force over the next few days!

Congratulations on finally joining the Couchsurfing project. I've been a member for about two years and host all the time; it's an incredible way to meet people.