It’s been another long day of travel and waiting today. I managed to get a few hours of sleep last night on the airport floor in a quiet corner tucked away behind the closed restaurants. There were a few other vagabonds bedding down there too.

I got up at around 5.30am, and went to check in, and we were in the air shortly after the scheduled departure time of 7am. It’s a two hour flight to Christmas Island, and on the way the captain informed us that the island was shrouded in fog, and we would have to hold for a while. Eventually the fog cleared a little, and a landing was a possibility.

I got a brief glimpse of the island through the thick dark clouds as we lined up, but on the bumpy final approach full power came back on just before touchdown, and we climbed steeply again. The captain told us that conditions had been to bad to complete the landing, and as the forecast offered little hope we had to make the two hour return to Singapore.

The rest of the day back at the airport seemed to slip by quite quickly, helped by a fantastic complimentary meal, and access to the premier lounge. I am now a fan of premier lounges! It’s a whole new world in there! Free beer, wine, coffee, food, TV, internet, massage chairs, and more. The rest of Singapore airport is really good too – X-Box games, a gym, gardens and relaxation areas – plenty to fill a day on standby.

Our flight was re-scheduled for early evening, and the same small group of people sat in the same seats again in an almost empty plane, and there was plenty of humourous chatter about the familiarity of the occasion.

We followed the same route out again, except this time Singapore was lit by the last rays of sunset, instead of the first rays of morning, and we were served dinner instead of breakfast. On the flight south we flew by a huge thunderhead, lit from inside by spectacular flashes of lightening. I managed to catch one photo of the cloud lit from within. 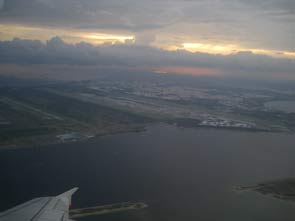 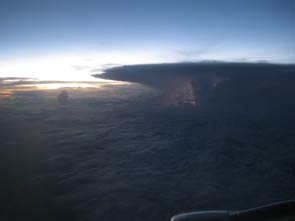 Despite the problems, SilkAir did a great job, and the staff really looked after us. I seem to have developed a really relaxed attitude to the travel recently, and am simply enjoying the journey for it’s own sake. It helps that I have plenty of time to spare at the moment, as the crabs aren’t going to disappear from the island anytime soon!