Chicago on a nicer day.

I seem to be making some progress here in Chicago. Yesterday I managed to open a bank account in my name, which was a bit tricky, but it now means that I can transfer funds from Australia in one larger sum, for one fee only, instead of drawing out smaller sums every other day, and getting hit for transaction fees every time. I will have a debit card, and be able to pay for stuff on the card, or withdraw cash at any ATM, no fees at all.

And today I went into the motor vehicle registaration office to find out what paperwork I would need to transfer vehicle ownership into my name. Would my Australian drivers licence be an issue? No. What about insurance? Not required to transfer ownership. So what do I need? The title document from the previous owner, and a sum of money. Easy!

However, my telecommunications system has taken a bit of a backwards step. Despite having made hardly any calls on the US mobile number I got, my credit seems to have been going down rather quickly. I went into the shop today, indignantly demanding to know what was going on. “Have you been receiving any calls?” Well of course I have, I’ve given out my new number to all and sundry, and happily chatted away to friends and family who have called me. “Ah, well there you go. You pay for incoming calls too.” WHAT! I can’t believe it! You pay the same rate on a pre-pay phone here for incoming calls as you do for outgoing ones. I was astounded! Nobody else here that I have mentioned it to here has been in the least bit surprised. “Of course you do, what did you think?”

Anyway, it was a much nicer day in the city today as I went for a wander around. After 5pm I met up with Aileen, who had contacted me through the website, and we went to the John Hancock Building for a drink. The view of the darkening city was awesome, and we had a few drinks before heading off for dinner.

Later on Aileen took me for a tour of her local neighbourhood, affectionately known as Boystown, due to the huge number of gay bars there. We picked one and went in for a drink, and a game of pool, and were entertined by a camp transvestite singing and dancing competition. Brilliant!

It’s just such random evenings that make this whole trip so much fun. At 3pm I was quietly tapping away on my computer keyboard, and by 11pm I was in the campest bar I have ever been in in my whole life, with a group of new friends! Marvellous! 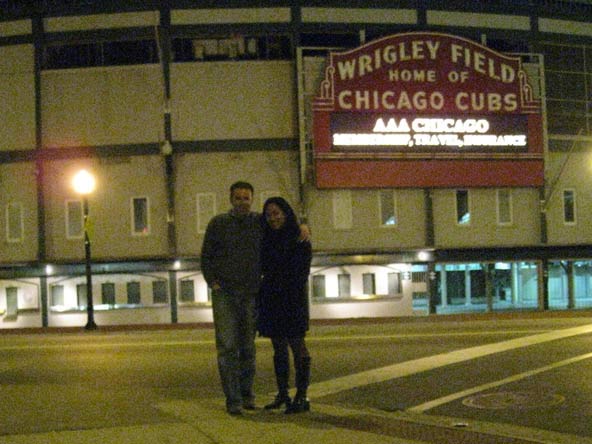