When I first put my ALife4Sale.com website online on 14th March 2008, the world’s press got a little excited about it all, and a few people asked if I had any worries about actually being able to list my “life” for sale on eBay, and whether I had actually spoken to anyone at eBay about it. After all, it was suggested, several auctions had been cancelled recently by eBay, particularly the guy who tried to sell his soul!

I had tried to contact eBay before my website went live, but without any luck. They have an almost impenetrable system of online help services that make it practically impossible to speak to a real living person. I wasn’t too worried though, as I was actually listing physical assets, such as my house and it’s contents.

Within a week of launching the website I was surprised to find an online interview in which an eBay represantative was questioned about my auction. They were obviously aware then of what I was proposing to do, and as I had hoped, seemed to have no issues with it.

I made further efforts to get to speak to someone personally at eBay, as I still had many questions on the practicalities of how I would like to do things, and eventually I was rewarded when I was contacted by Matthew, one of the Australia help reps. Finally I had a direct line to someone who could answer all of my questions, and help get things set up efficiently with plenty of time to spare.

Matthew and I spoke many times in the months running up to the auction, and I found out that he is actually based in Vancouver, but works Australian business hours. When I finally decided what I would be doing after the auction ended, and realised that I would be passing through Vancouver at some point, we decided that we should try to meet up when I did.

And so this morning Matthew flew back in from his winter break in Hawaii, and came to collect me. We headed down into the city, and went to Granville Island Markets for a look around and to see the city from the south-western side. After lunch Matthew took me to an interesting ice cream shop.

Before Christmas, Jason and Merryn had taken me there after our Vancouver tour, but the place had been closed – it is obviusly well known and loved by locals. The International Ice Cream Factory is hidden away on an industrial estate and as a tourist you would never find it without local help. They serve 218 different ice cream flavours, and are well known for some of the very unusual ones they create.

I tried Apple Wasabi, which was surprisingly good. The Chili Chocolate was very spicy, and I was tempted. I could not resist trying Garlic, but was not very keen – it would not be my choice today. Finally I settled on a two-scoop combination, one Rice flavour, and one Curry! I was really quite nice, but I couldn’t decide whether it was like eating a main course or a dessert!

Matthew is one of the people on my list that I wanted to meet from ALife4Sale, and as such brings me a step closer to completing my “Meet ten new people from ALife4Sale” goal. I am pretty sure that I have now met many more than ten new people, but there are still a couple left to track down and meet. 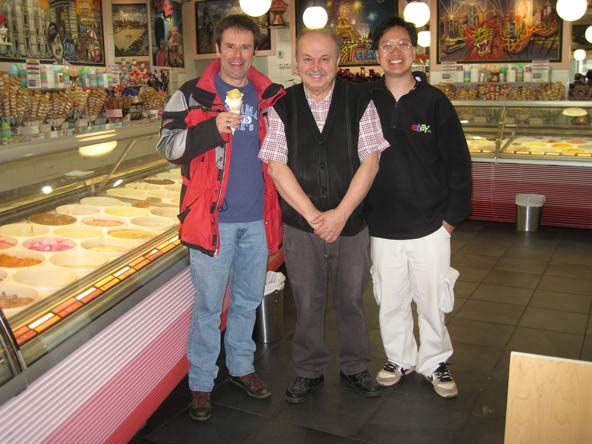 Thanks for the tour guide services Matthew, good to finally put a face to the name.

Chili chocolate! Mmm, I want to try that! (Seriously!)

I had a scooop of garlic ice cream in Gilroy, California once, and I really liked it, but I wouldn’t want to buy a whole tub to take home…