After my late arrival the night before, I had a fairly easy day around Colorado Springs, and was shown around some of the local sights by Val. We went to see Garden of the Gods, which has some spectacular rock formations, and met with a TV news reporter who wanted to do an article for the news that evening.

We collected a minibus which Val planned to use for the next day’s hike to Pikes Peak, and I met a few people at Val’s workplace, a couple of whom may be joining us later in the week for a couple of peaks.

That evening Val and Brenda had organised a BBQ at their lovely home, and I met many of their friends. Several of them will be joining us for some or even all of the seven peaks.

The next morning we got a reasonably early start, and several fellow climbers turned up at the house for the trip to Pikes Peak, probably Colorado’s most famous and accessible 14,000 foot peak, also known as America’s Mountain.

There is a road that leads all the way to the summit, and we started our climb pretty high up the mountain, as Val wanted to give me a reasonably easy introduction to mountaineering at such altitudes. There were also a few other beginners like myself in the group.

The weather was cool but clear, and we made our way up towards the clouds which hovered just above the summit. The climb itself was relatively easy, but the air is very thin, and pretty soon I was panting hard, and my heart was pounding. Many of the others in the group seemed to be able to walk quite a bit quicker than me, holding a conversation at the same time, while I simply struggled to gasp for breath.

We reached the summit around an hour and a half later, and I was amazed to find a full car park, a gift shop and restaurant, and a cog railway (the highest one in the world) that comes up to the summit on the other side of the peak. It really is accessible to all.

After a quick break a few of us elected to walk back down to the start point, while others elected to return in the minibus. By the end of the walk my head was starting to pound a bit, and I was certainly feeling the effects of the altitude.

We only had a couple of hours to get ready to set off for the rest of the week, and I hurriedly re-packed and organised my bags, still feeling the after effects of the slight altitude sickness that I had.

Val’s friend Tim, who would be joining us for all 7 peaks, drove us to Dillon, where more of Val’s friends have a condo that we will be using for the next couple of nights. I elected to take the back seat, and promptly fell asleep for most of the journey. I felt much better when I woke, and we have now settled in to the very scenic apartment for the evening. 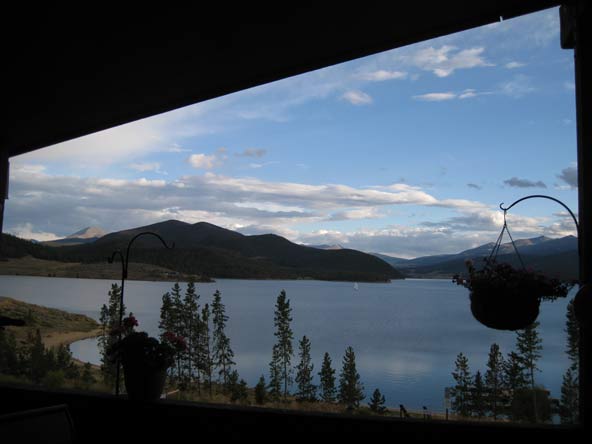 Thanks to all who joined me for the first of my Colorado 14ers, making this the biggest ever group of people to have joined me so far on my travels. A great, and reasonably easy introduction to high-altitude mountains.

One peak conquered in one day, only six more to go! More info on Pikes Peak here:-
Pikes Peak