Day Two of my attempt to climb seven of Colorado’s 14ers (peaks higher than 14,000 feet) began early with breakfast at the condo, and an early departure for the day’s start point about an hour’s drive away.

There would be a group of eight of us climbing today, myself, Val and Tim, who are hoping to achieve all seven peaks, and also from yesterday, Bob, Mary, and Justin. New additions to the group Eric and Paul also joined us. Eric plans to be with us for the rest of the week, and having climbed Pikes Peak before, is also pretty-much doing all seven peaks.

It was cold in the shadow of the mountains as we began our climb, but we soon climbed up into the sun and the layers of clothes started to come off. The day was bright and clear, winds light, and the climb fairly steep, but not too demanding.

I was feeling pretty fresh again, and took my time climbing, and although I could feel the same gasping shortness of breath at times, the first peak of the day was soon conquered, and we stood on top of Mount Democrat, at a height of 14,148 feet, 38 feet higher than yesterday, and a new record for me. (Before yesterday the highest I had been was 13,435 feet way back in 1999, when I climbed Mount Kinabalu in Borneo)

I was feeling fine, and confident about the next two peaks planned for the day, which would take us on a circular route without losing too much height. We dropped down to the saddle and started climbing again, crossing another summit of over 14,000 feet. Unfortunately, Mount Cameron is not counted as a true 14er, as there are several criteria that need to be fulfilled to do so. Mount Cameron is 14,238 feet high, but between there and the next peak, Mount Lincoln, there is less than 300 feet of drop, and less than a mile distance, both of which are required for inclusion in the list of 53 true 14ers.

By the time I reached the summit of Mount Lincoln, at 14,286 feet, lagging a little behind most of the group, my altitude headache had started, and I sat with my head in my hands for a while. More water, and a bite to eat improved my condition, and after another summit photograph, I was ready for the descent to the next saddle, feeling good again.

But the final climb to the 14,172′ summit of Mount Bross, was a real struggle, and my head was really pounding by the time I got there. I laid down and closed my eyes, feeling a bit nauseous too, and it was all I could do five minutes later to drag myself up for a final summit photo. I improved a little with some rest, and felt better as we begun our long steep descent back to the vehicles.

By the time we got down I was feeling pretty rough again, and slept in the car on the way back to Dillon. I woke feeling much better, and beer and a burger at our happy hour bar soon sorted me out again. It really is surprising how quick the altitude sickness can come, and then how quick it can go again.

The whole trip took around seven hours, all of which was spent at over 12,000′, most of it well above 13,000′. We now have a rest day planned for tomorrow as we travel from Dillon to Ouray, and Val thinks that I shouldn’t have too many more problems now, as I should be fairly well conditioned for the altitude. I hope he is right, as the last hour of today’s descent was pretty miserable.

The actual walking and climbing itself is reasonably easy, and in England, a walk like today around peaks in the Lake District, or down in Devon, would be a nice easy day out. But at yesterday’s altitude, it became one of the toughest days I have ever spent in the mountains. But afterwards, when the head stopped pounding and I had had a bit of sleep, I certainly felt proud of the achievement.

Thanks again to all who came along on tough Day Two, and also for all of the support and encouragement that was much needed. Four peaks in two days! 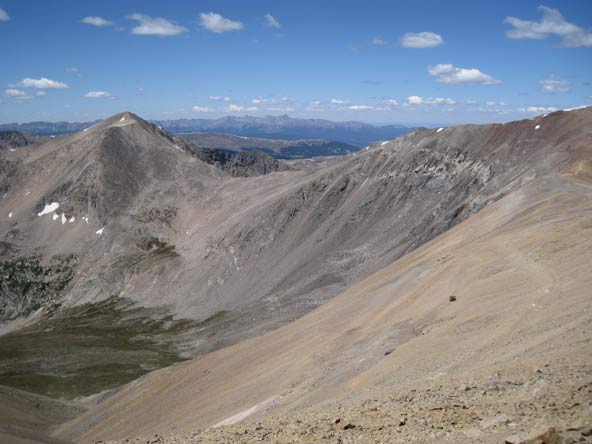