Getting to grips with the garden

Our first priority at our new property was to get the overgrown land into some sort of order, and to make some of it productive as soon as possible.

The final signing off on the purchase took place at the end of April, so it was early May before we really got around to doing much. The previous owners had said we were welcome to start work before the sale completed, if we wanted, but our last minute dash to the UK in April meant we hadn't been around for the whole month to do anything.

The place had become a bit of a jungle by May. Things seem to grow quickly here once spring gets into high gear.

My neighbour lent me his chain saw, as one of the two big walnut trees on the property had died, and was looking a bit dangerous. Down it came, and it's now been chopped up into logs, drying out for use in winter 2022.

The other walnut tree is in great shape, and will hopefully be productive this year. 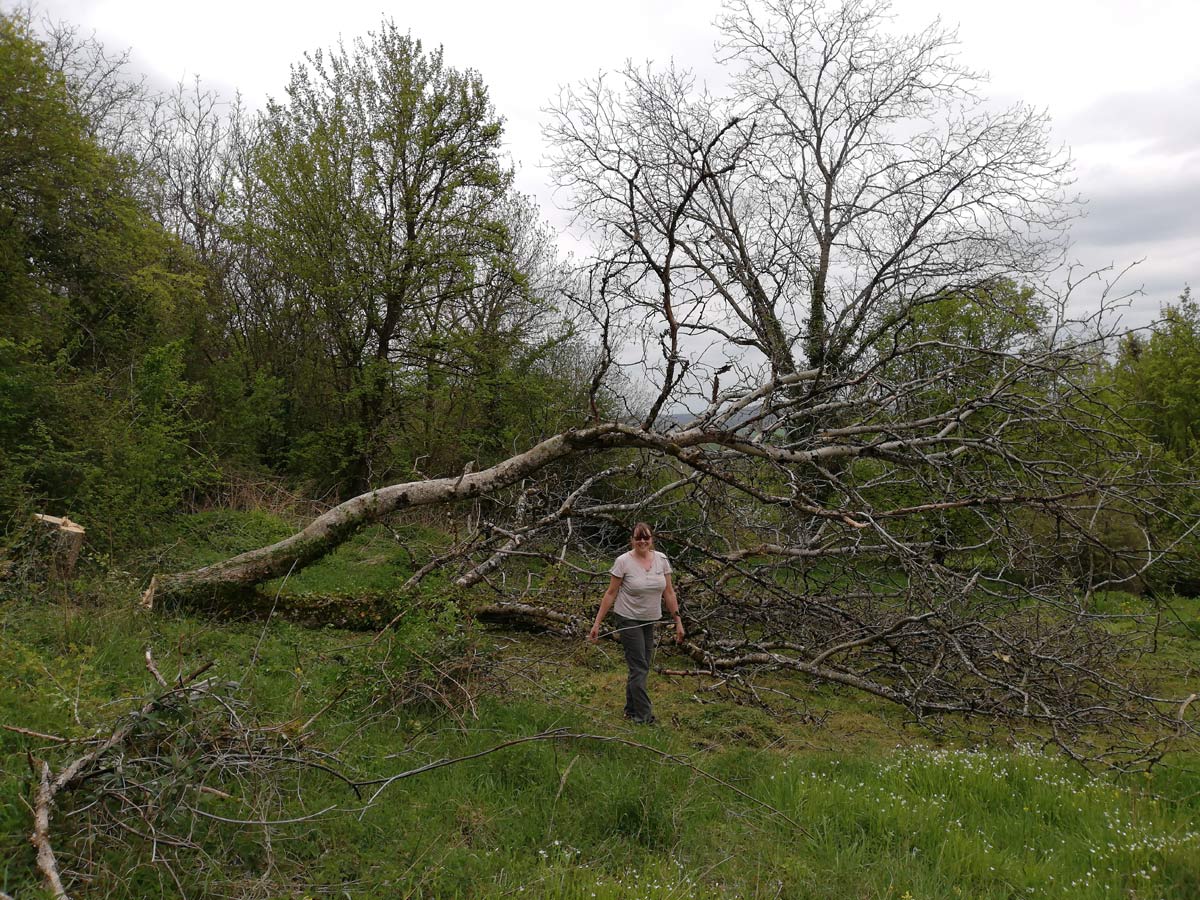 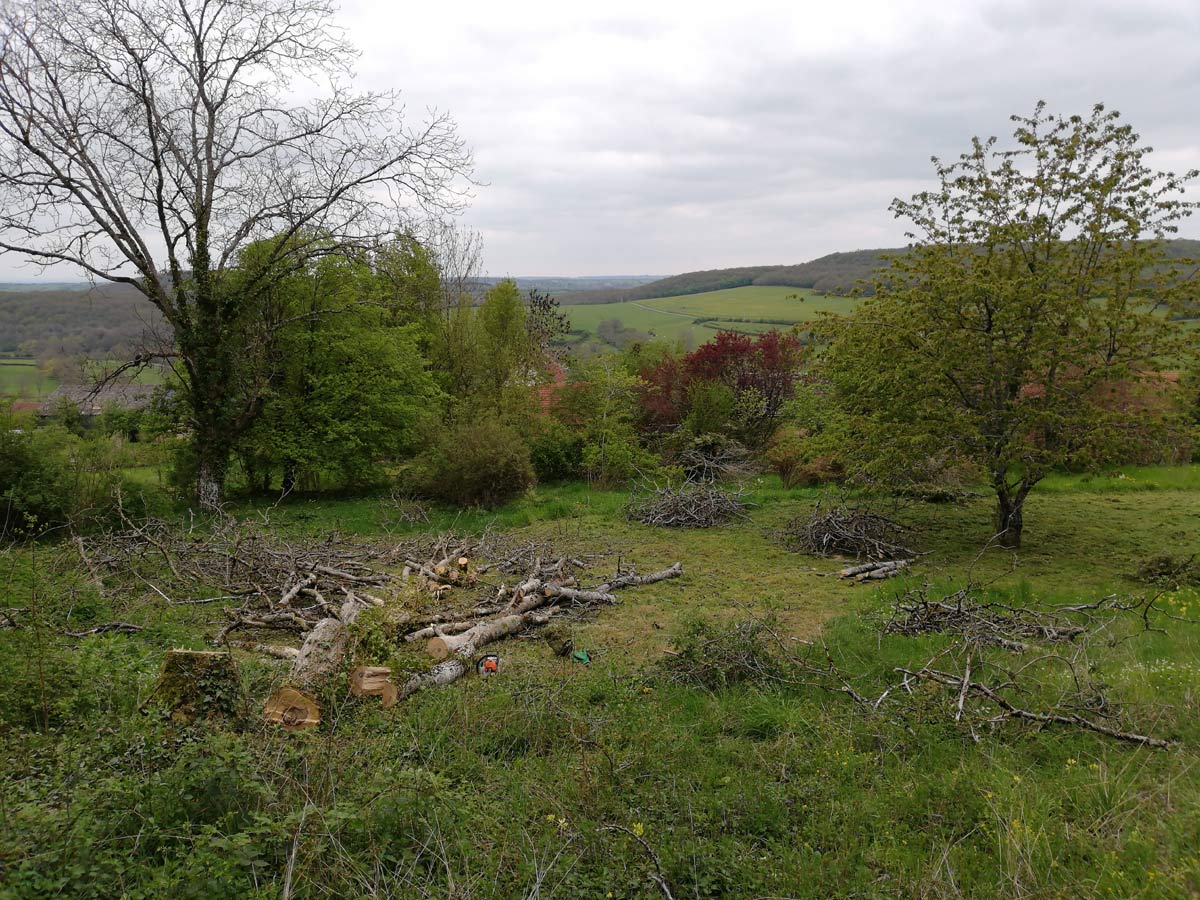 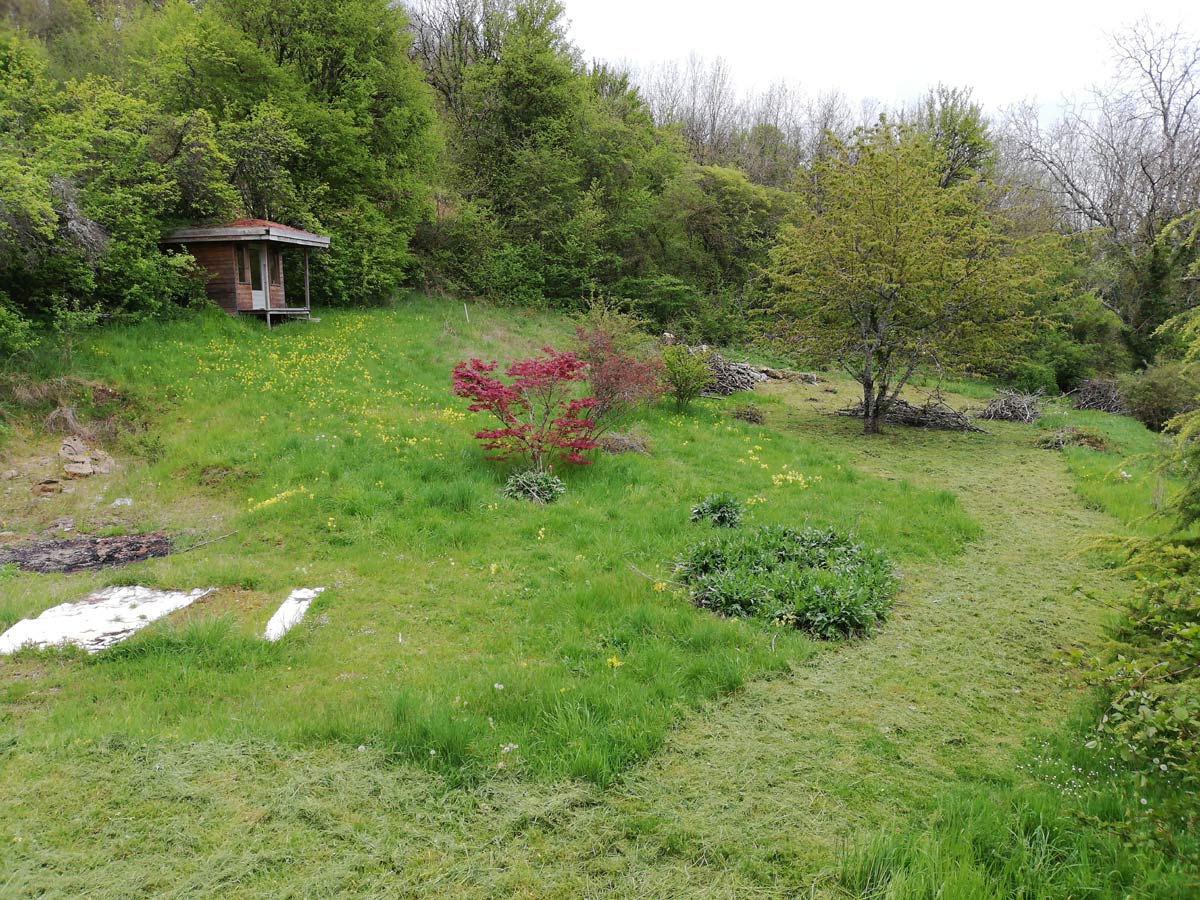 Our first purchase was a strimmer - I think this is called a weed whacker in the States, and a whipper-snipper in Australia. It took a couple of days of concerted effort to re-clear the area that had been clear when we viewed the property in late January.

We also cleared out some more areas which had obviously been neglected for five years or more, as the previous owners had done little to develop the place, and had had someone doing just the minimum of garden maintenance. 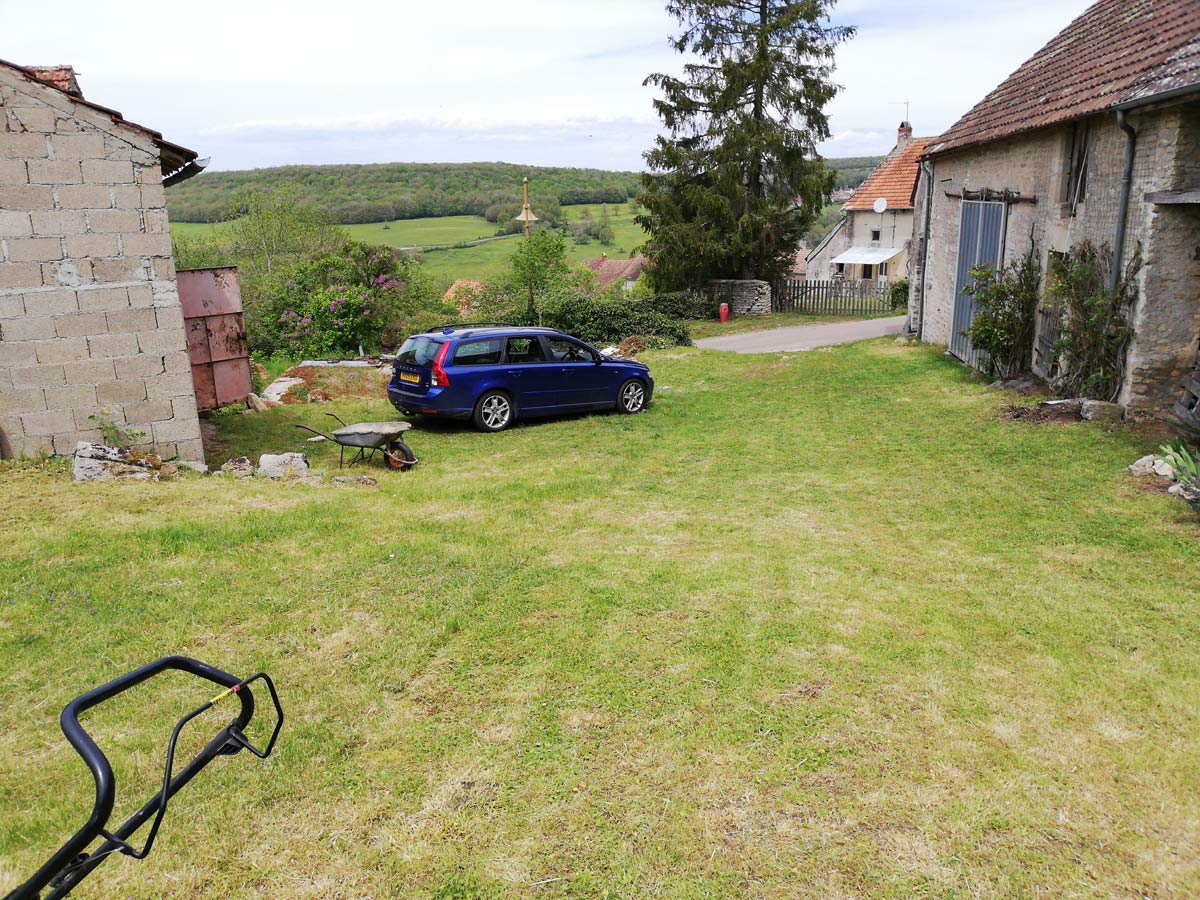 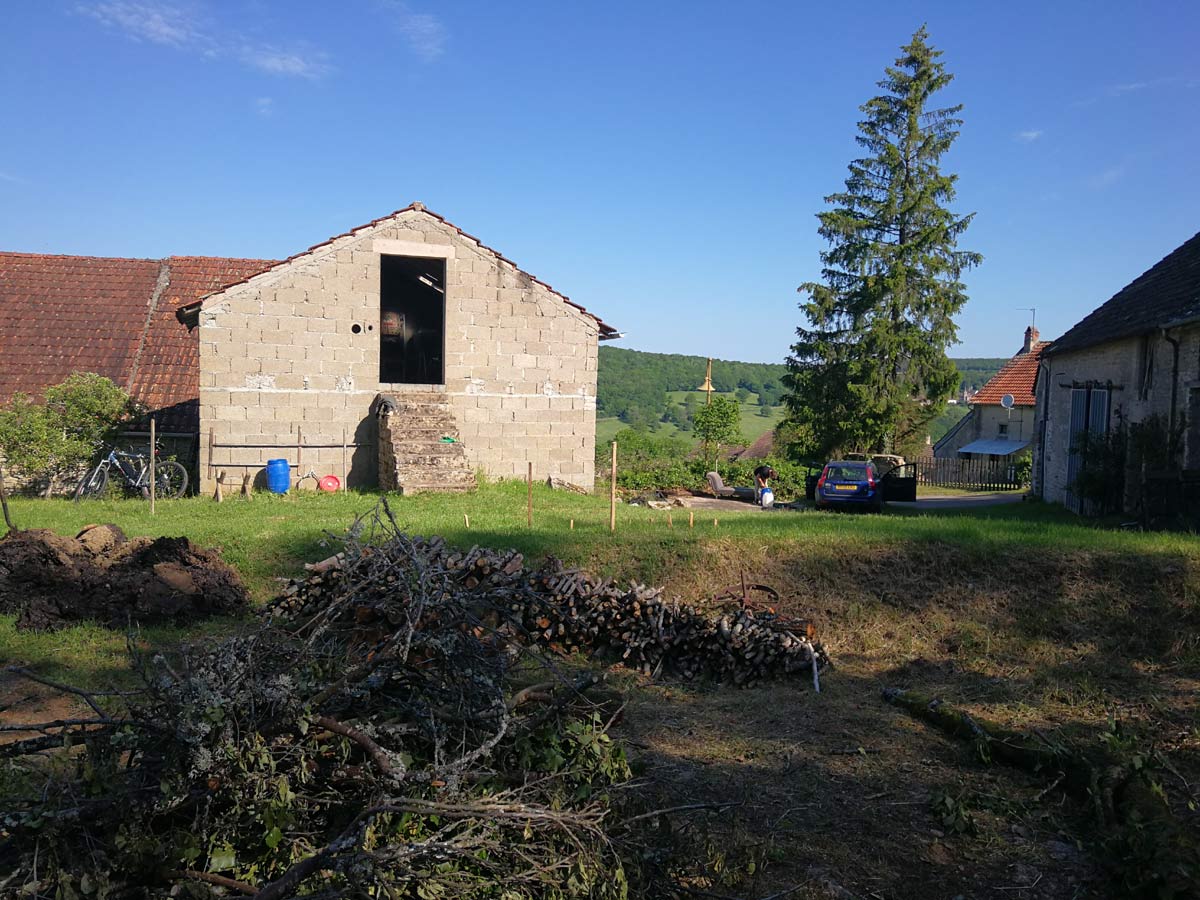 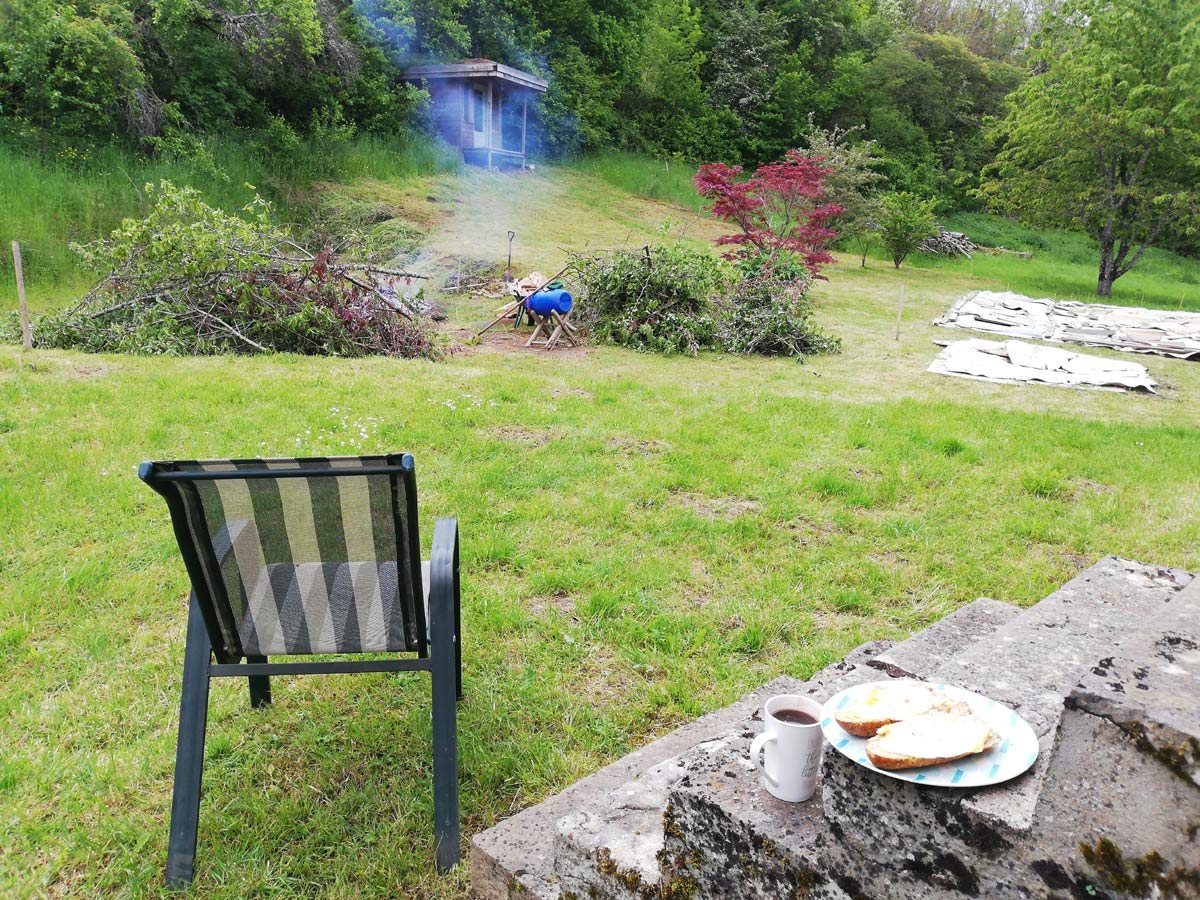 The area of land we own, including the barns, garage and little summer house totals 2,425 square metres - for those that use other measurements of area, that's about 0.6 of an acre, just under quarter of a hectare, or about 26,000 square feet.

After our first major week of clean-up, which involved cutting and burning hige piles of bramble bushes (blackberries), wild wild roses and nettles which had taken over everywhere, we reckon we'd cleared about 60% of the land.

Much of what was revealed underneath was mainly grass, with quite a lot of deep moss too, but the moles have been busy, so a lawn mower would only be useful for certain areas.

It looked like the strimmer was going to be well used.

With a large area cleared it was time to make a garden bed for some vegetables. We already had potatoes growing in pots back at "home", which is just 4 kilometres away.

I had become intrigued by the concept of "no-dig" vegetable gardening, and had been watching lots of videos by UK-based no-dig guru Charles Dowding. You can find his YouTube channel here if interested in the concept:

So I began the construction of our first plant bed by laying cardboard, setting up planks to hold soil and compost in place, and sourcing the necessary materials. 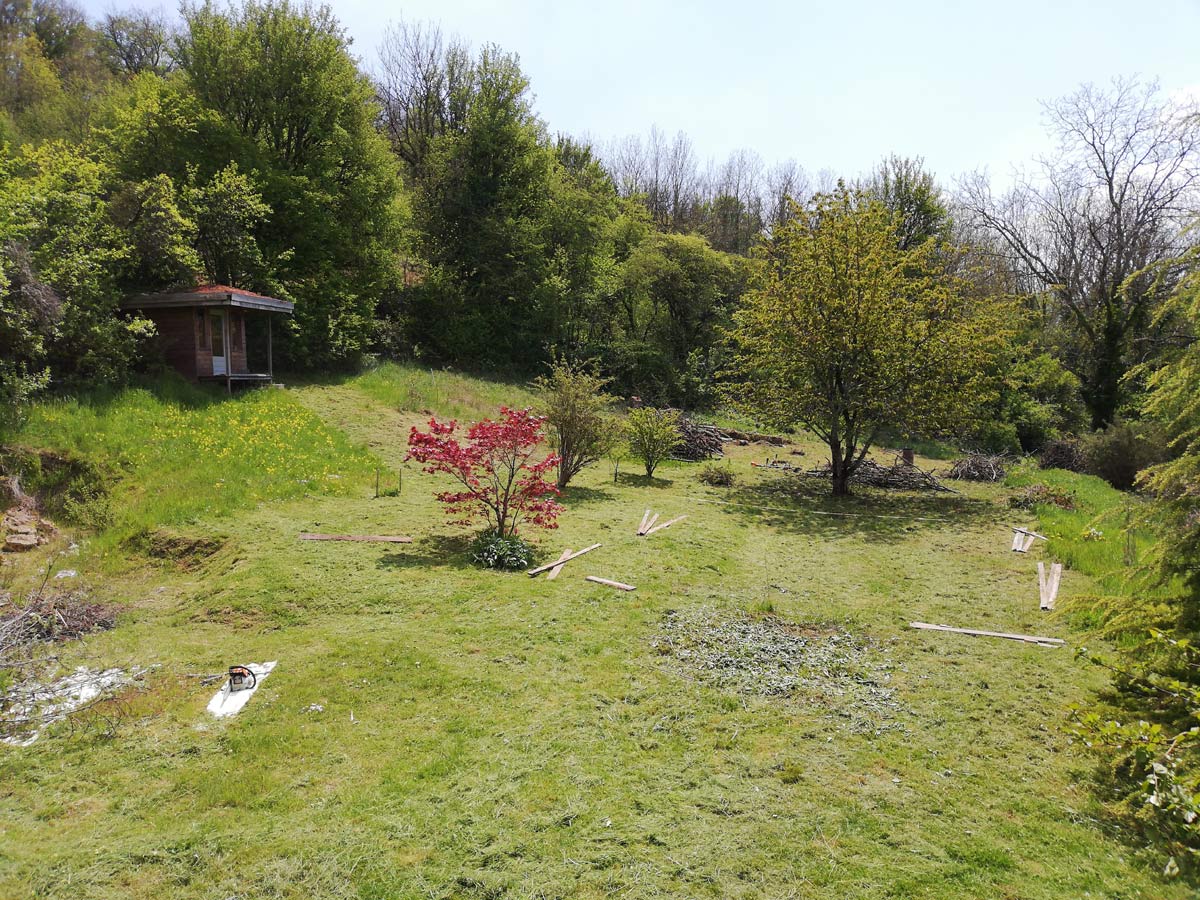 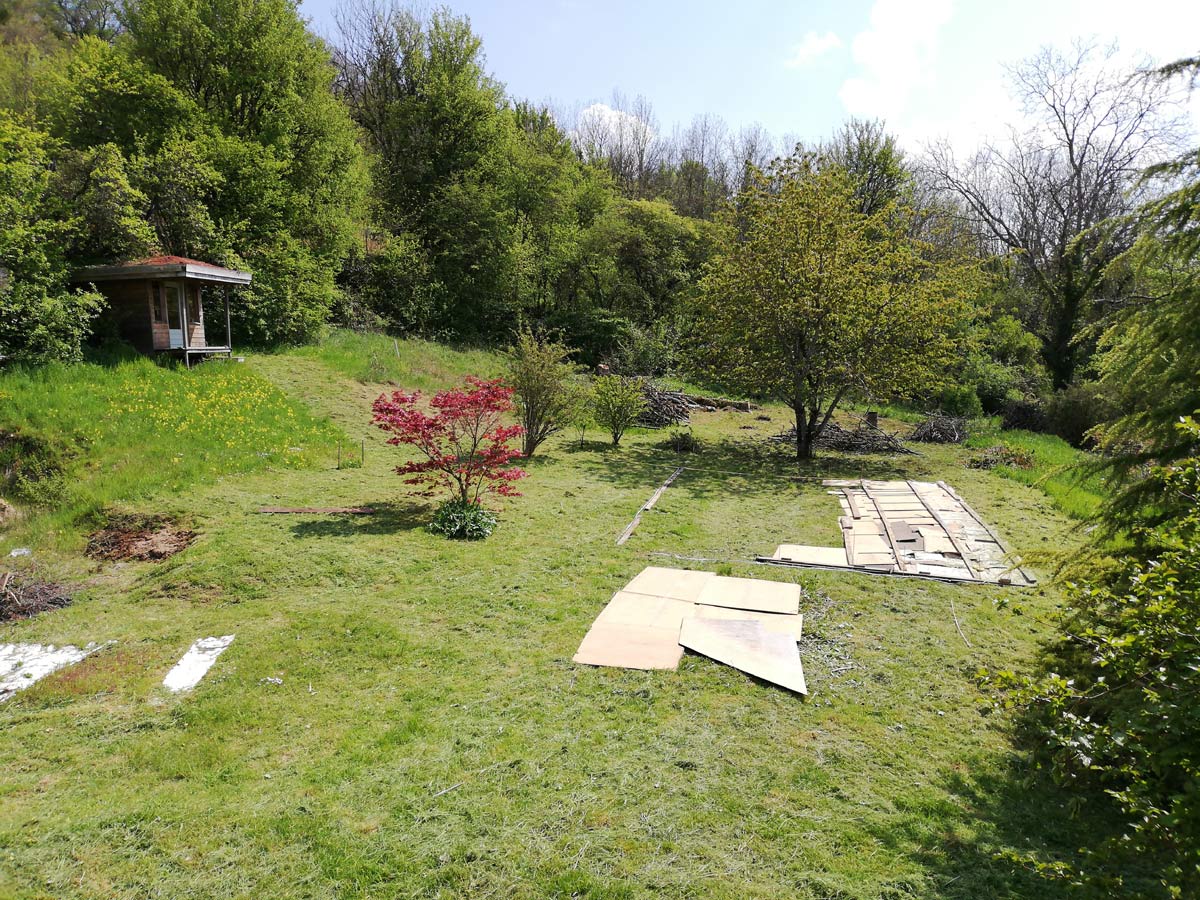 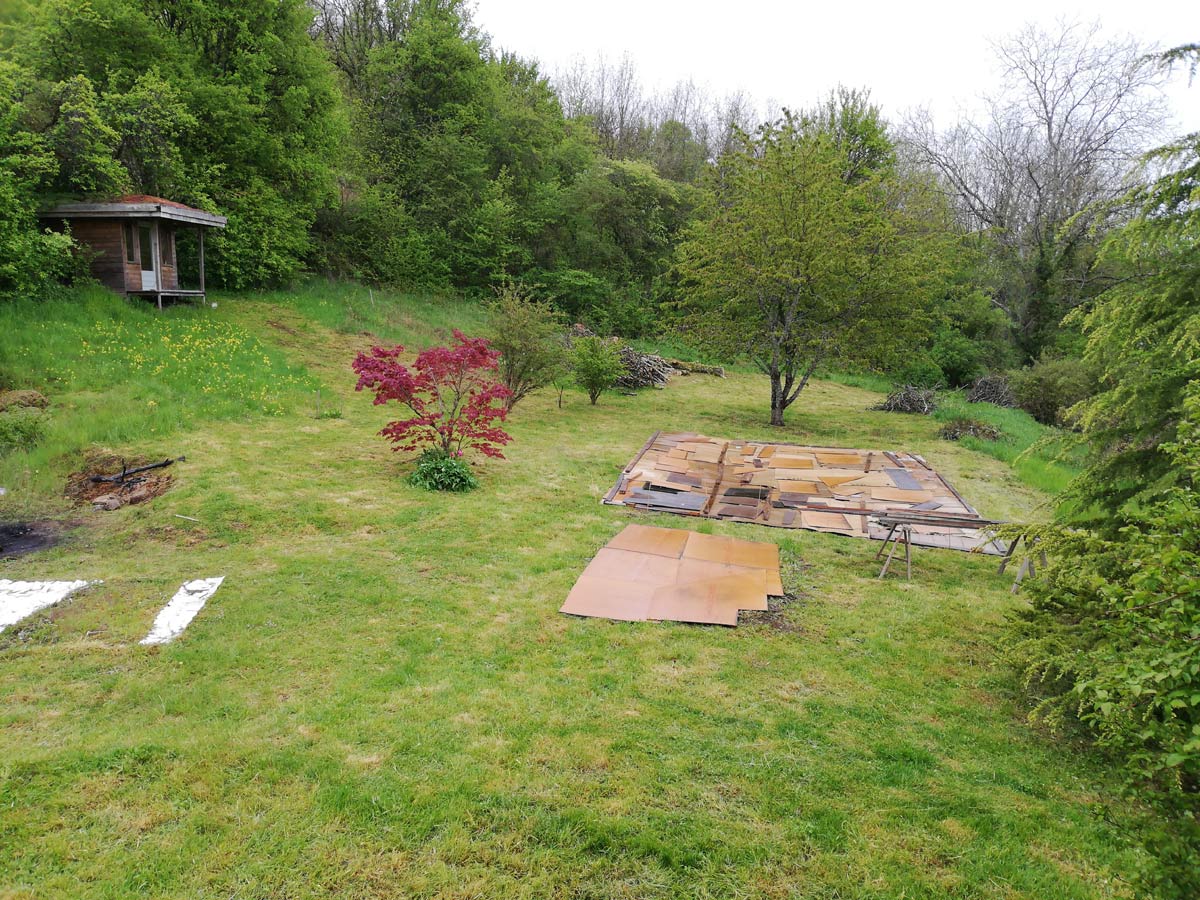 Over the course of a week or so the beds took shape, and the plants finally started going in. 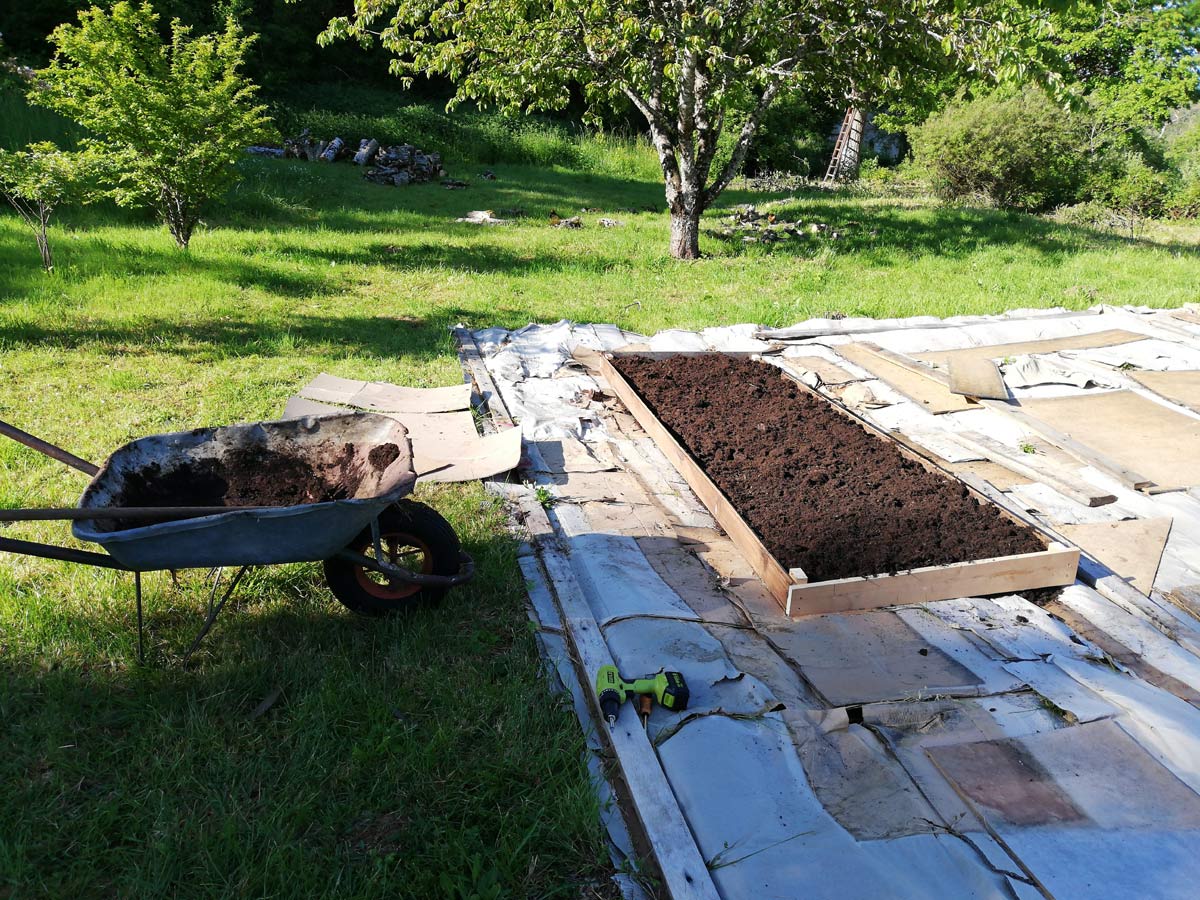 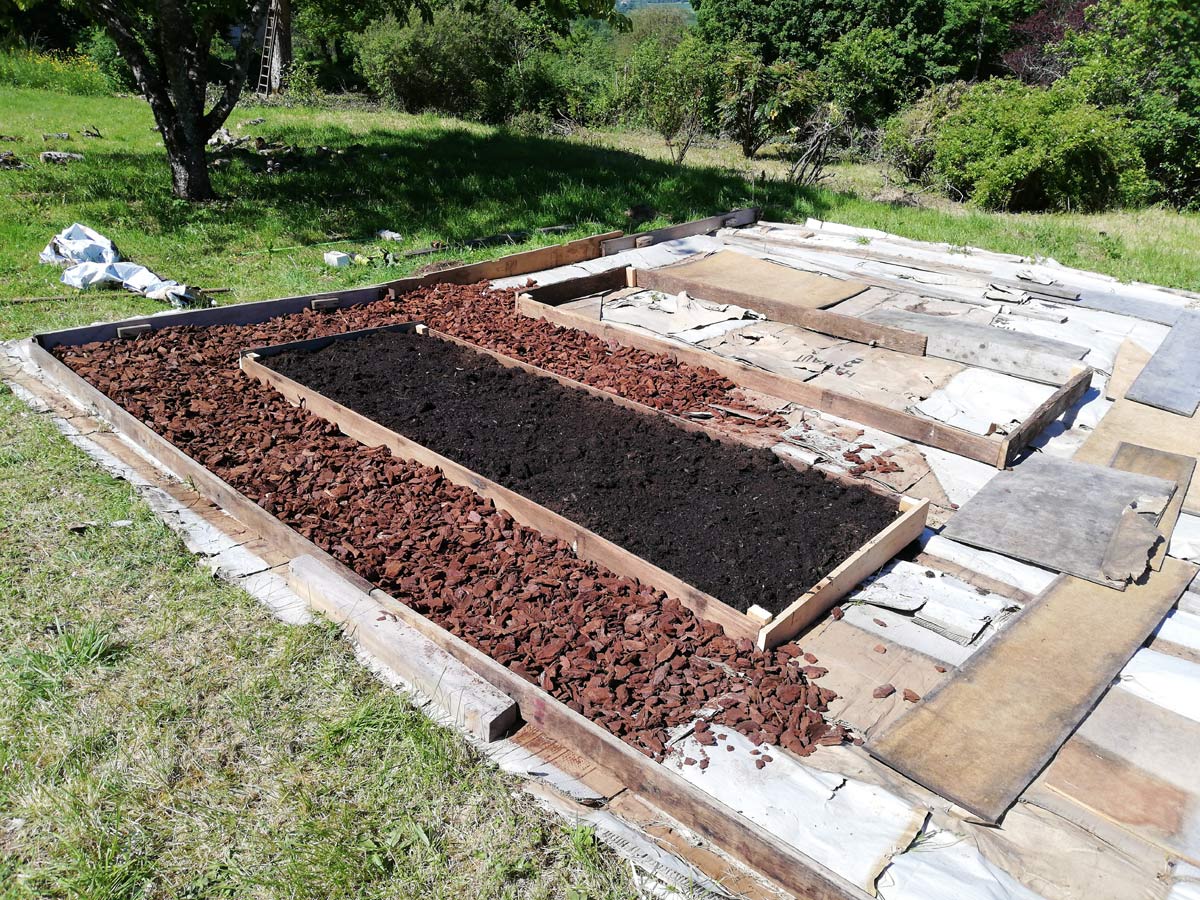 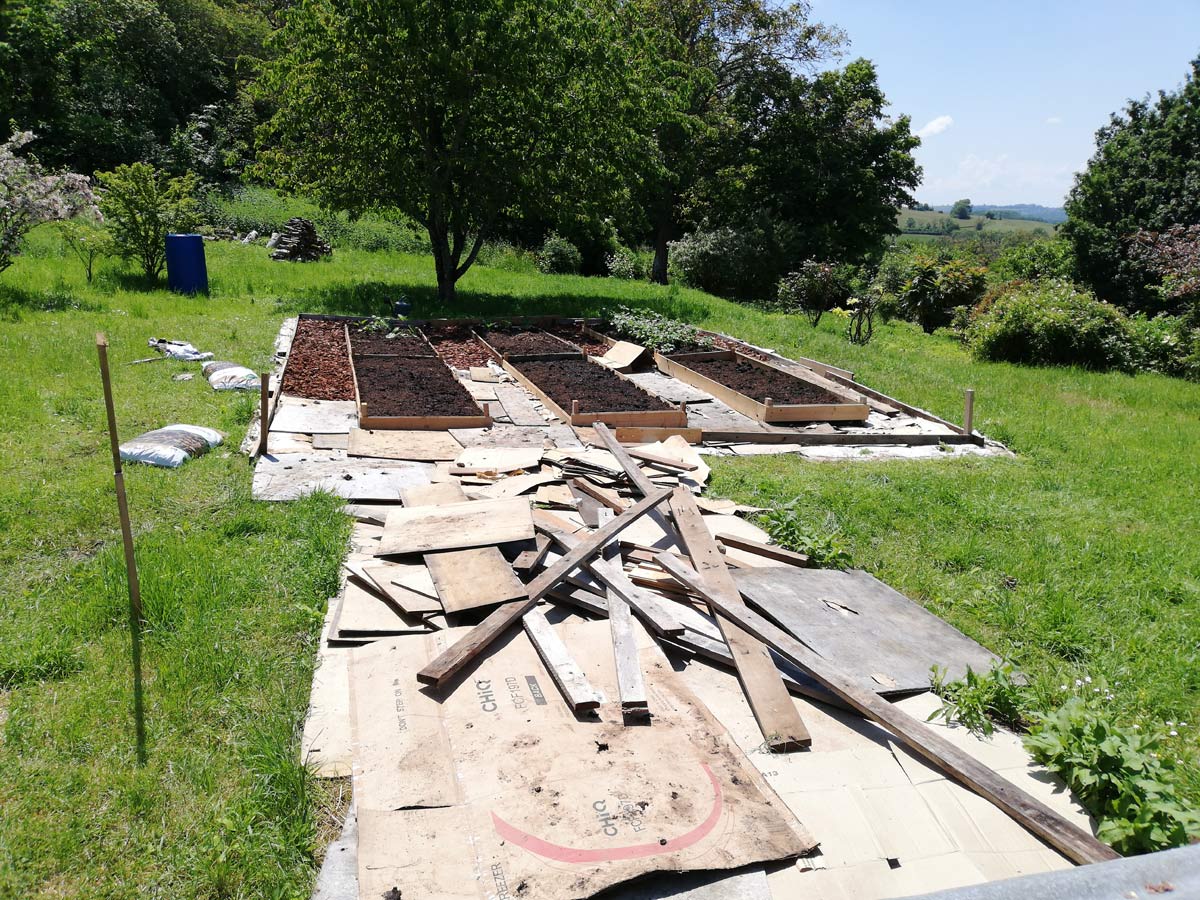 The other priority was to sort out a way to water the plants. There is an electricity connection to the property, but no service is currently active. Unfortunately there is no water connection. However, there is a huge concrete slab near the entrance of the property, and under that is a large water tank, which we estimate holds about 4 or 5 cubic metres of fairly clean rainwater.

Initially we could just pull this out with a bucket on a rope, but I had plans for a better system, involving one of the solar panels I had ordered, and a little 12 volt pump. 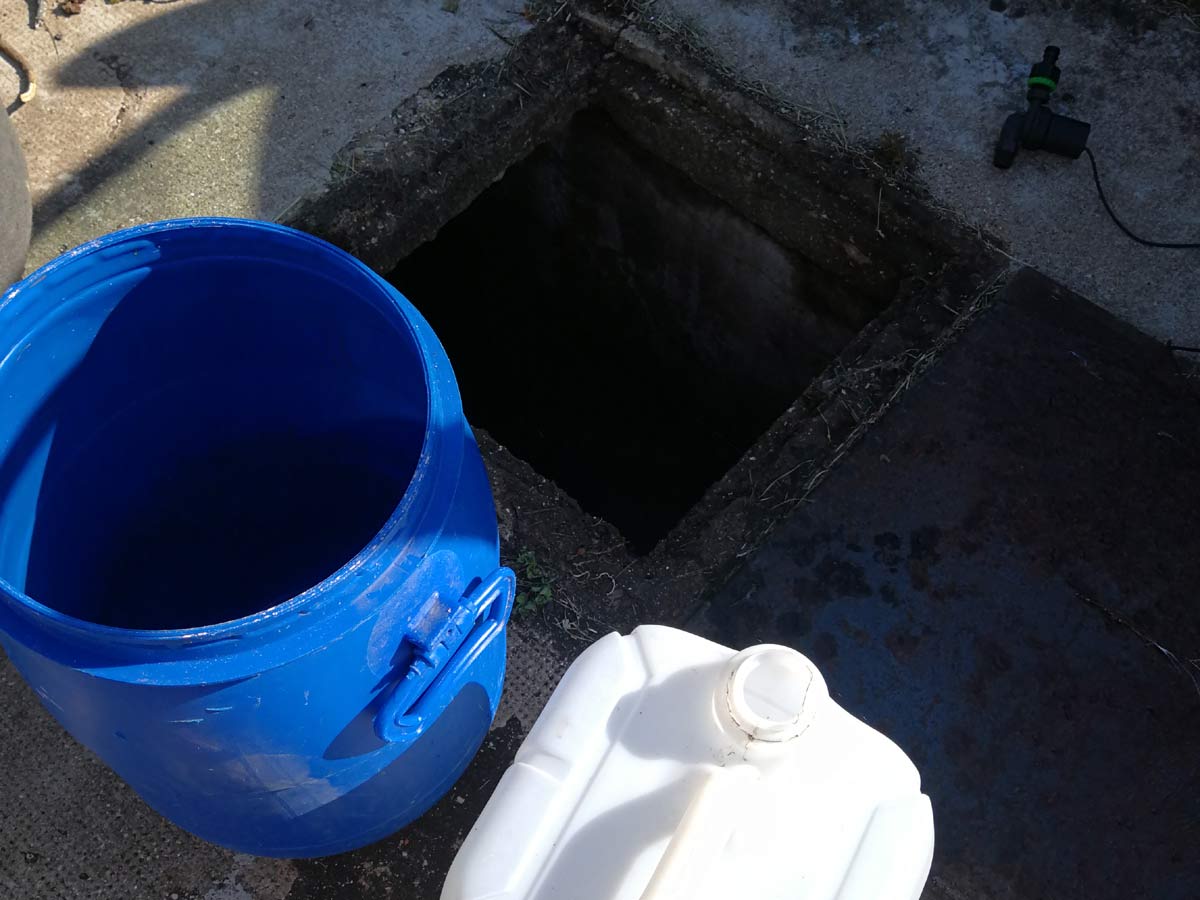 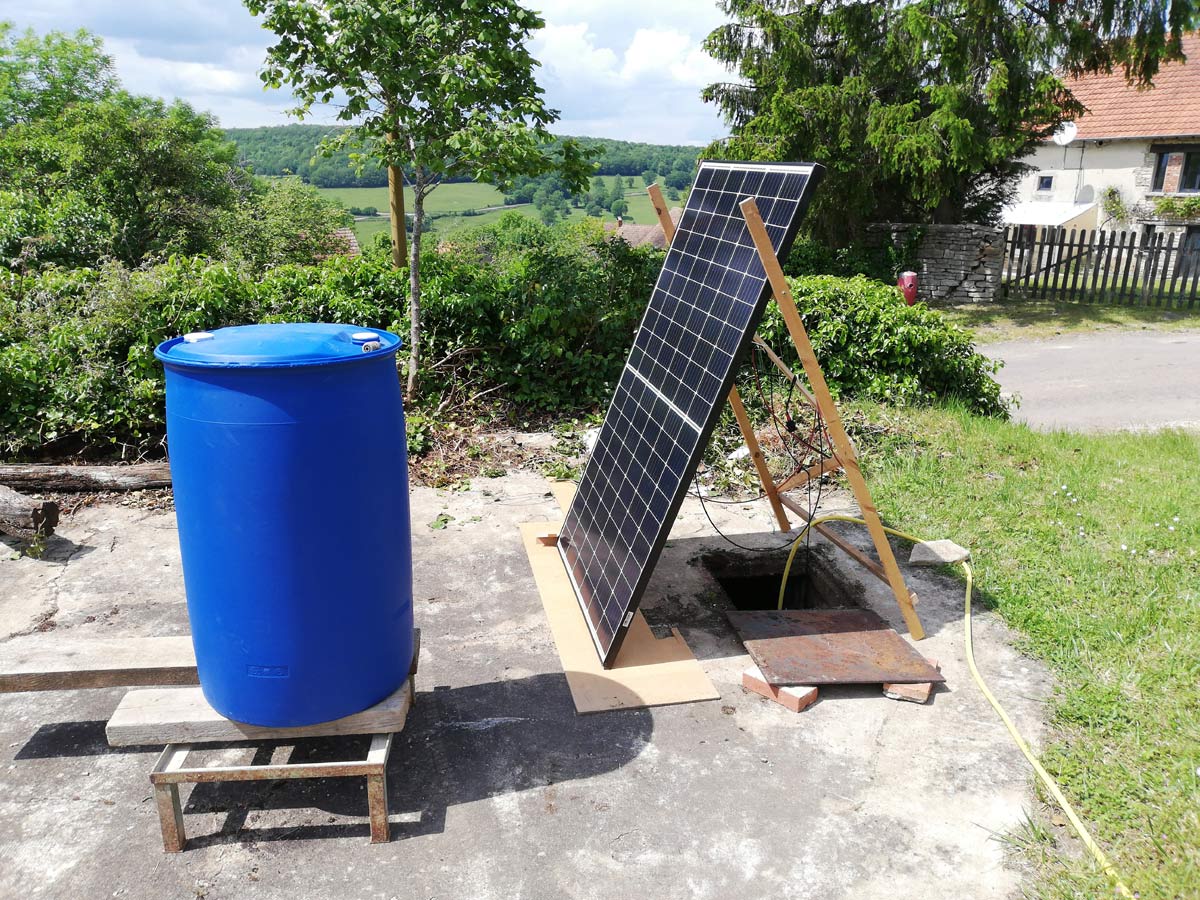 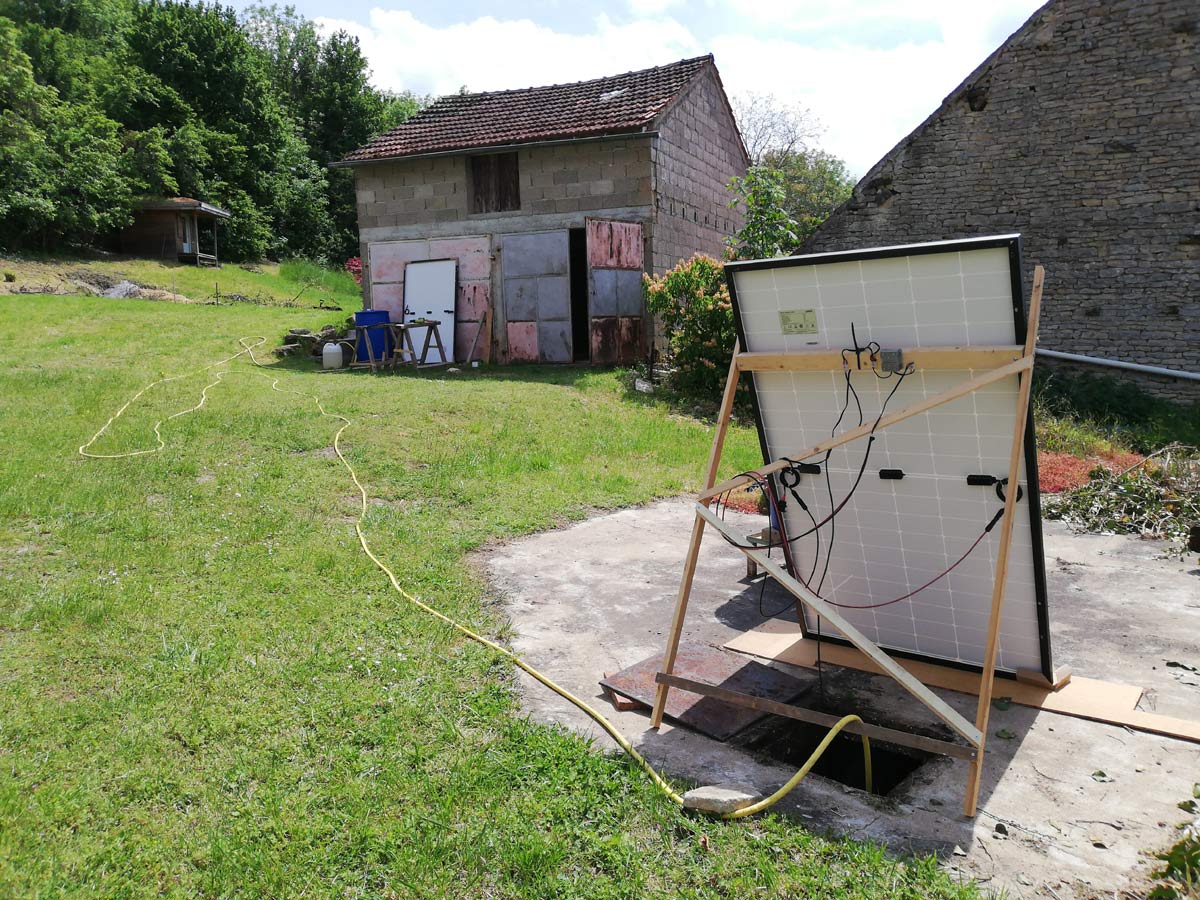 So, by early June we've got a fairly clear plot of land, a decent sized vegetable patch starting to grow, and a simple water system to see us through the summer. Not a bad start.

There has been progress in other areas too, which I'll cover in the next post...

I am SO impressed with all the work you’ve both been doing! Bravo to you two! You’re highly inspirational!

Thanks Sayward. Slow progress, but really enjoying seeing it come together piece by piece.