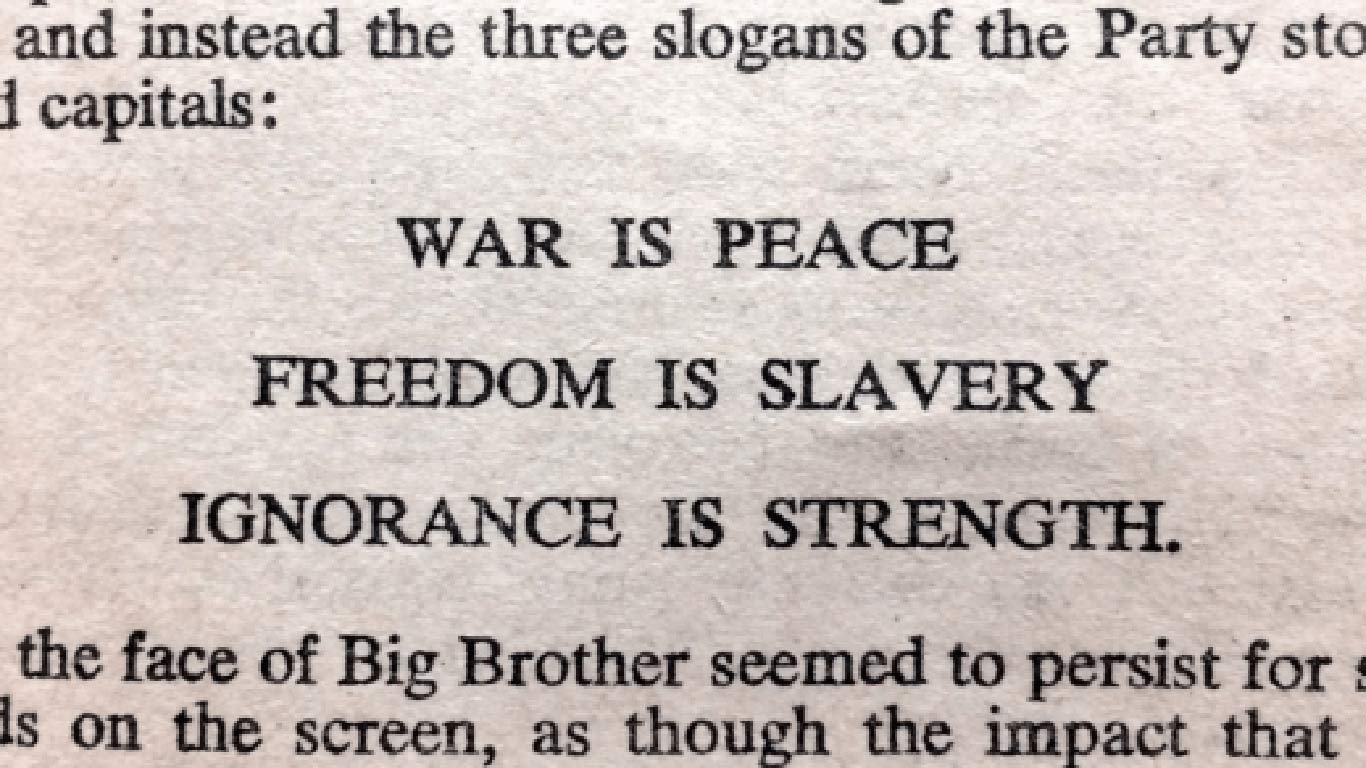 On 8th June 1949 one of the world's most influential books on the topic of totalitarian governance was published.

George Orwell's "Nineteen Eighty-Four", praised as a classic literary example of political and dystopian fiction, is still widely read to this day, and has introduced numerous new words and phrases to our language:

Orwell's own name has become part of our language too, when we use the term "Orwellian nightmare" to describe a situation when a government oversteps the boundaries, exerting more totalitarian control over people's lives.

Perhaps one of the most enduring ideas from the book is embodied in the word "doublethink".

Doublethink means the power of holding two contradictory beliefs in one's mind simultaneously, and accepting both of them.

Q: How can you tell when a politician is lying?

A: His lips move.

This timeless old joke is considered a classic because most of us know instinctively that it is generally true.

The same joke could also be used about big industry. Tobacco companies, oil giants, big food, pharmaceutical companies, the big banks and industrial manufacturing have all had their time in the spotlight for an endless array of damaging misdeeds, followed by lies to cover their tracks.

Q: How can you tell when Big Pharma is lying?

A: They tell you their latest miracle drug is safe.

So today we find ourselves in a confusing world of doublethink, where we are now expected to believe two contradictory narratives at the same time.

We know that both politicians and big pharma companies tend to put their own interests above all else.

Sure, there are some decent politicians who perhaps have the interests of their constituents at heart, but never ending news stories of political scandal, back-stabbing, lies and deceit, mis-appropriation of funds, acceptance of bribes, and general political grift should convince most people that those in the corridors of power serve their own needs first.

We also know that Big Pharma is a multi-billion dollar industry with a war chest of funds big enough to buy enormous influence within those same corridors of power.

Yet even as we instinctively know these two things, we are expected to believe that the COVID-19 vaccines, which have been hastily produced by these same profit-hungry giants and then almost immediately given "Emergency Use Authorization" by the same politicians we so often distrust, are necessary, safe and effective.

Welcome to our new reality of doublethink.

Even more concerning, I believe, is that to dare to question the new "vaccines are the only way out of this crisis" narrative is to invite labelling ("anti-vaxxers", "conspiracy theory nonsense"), ridicule, even censorship.

Surely, part of any health initiative involves building the trust of those who are asked to accept experimental new treatments?

Because let's be clear about this... to date none of the vaccines have received full approval. In the USA they are still being used under Emergency Use Authorizations only. Without medium-term and long-term studies their safety and efficacy is still relatively unknown.

So why are dissenting voices being silenced? Why is there a huge push to undermine anyone who has legitimate concerns over the swift acceptance of these experimental drugs?

The suggestion is that to "achieve herd immunity" we need somewhere between 55% and 80% uptake of these vaccines. Anyone who spreads "disinformation" about vaccines is "endangering the lives of others". And therefore needs to be silenced.

So once again, I would ask why there is such a push to silence any form of questioning about the vaccine roll-out, particularly the speed and enthusiasm with which the new mRNA technology has been embraced.

The "playbook" seeks to brand anybody who expresses doubts as an "anti-vaxxer", and suggest that such people have a "deadly plan" which must be thwarted at all costs.

(NOTE: I'll be looking at the "playbook" and the suggestion of a "deadly plan" in a future article)

It seems to me that those of us asking the questions are less likely to be the ones with a "deadly plan" than those who want to silence us.

When you tear out a man's tongue, you are not proving him a liar, you're only telling the world that you fear what he might say.

I'll leave the last word to George Orwell, in two quotes which give fuller details of the power of doublethink:

To know and not to know, to be conscious of complete truthfulness while telling carefully constructed lies, to hold simultaneously two opinions which cancelled out, knowing them to be contradictory and believing in both of them, to use logic against logic, to repudiate morality while laying claim to it, to believe that democracy was impossible and that the Party was the guardian of democracy, to forget whatever it was necessary to forget, then to draw it back into memory again at the moment when it was needed, and then promptly to forget it again: and above all, to apply the same process to the process itself -- that was the ultimate subtlety: consciously to induce unconsciousness, and then, once again, to become unconscious of the act of hypnosis you had just performed. Even to understand the word 'doublethink' involved the use of doublethink.